Plus: Everything you need to know about the latest Scarlett Johansson controversy, new 2020 fundraising and polling numbers, and warnings about "meth-gators" 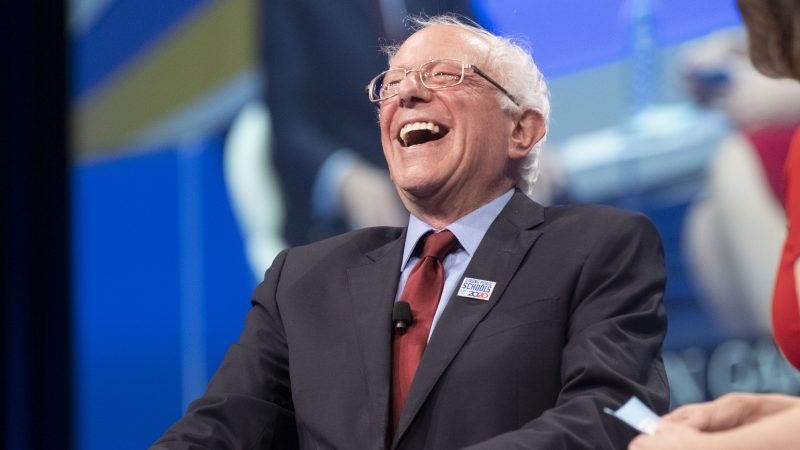 Democratic presidential candidates used the occasion of Amazon's yearly Prime Day sales event to attack the company for its working conditions. They also pushed their own plans to either rein in the online retail giant or break it apart altogether.

On Monday, Sen. Elizabeth Warren (D–Mass.) re-upped her plan to dismantle Amazon and other big tech firms by forbidding them from selling their own products on platforms that they own. That would mean Amazon would have to spin off or kill its in-house brands like AmazonBasics and GoodThreads.

"Giant corporations like Amazon have too much power," said Warren in a Tweet. "My administration will make big, structural changes to the tech sector to promote more competition—including breaking up Amazon, Facebook, and Google."

Giant corporations like Amazon have too much power—in fact, nearly half of all e-commerce goes through Amazon. My administration will make big, structural changes to the tech sector to promote more competition—including breaking up Amazon, Facebook, and Google. #BreakUpBigTech pic.twitter.com/SIqJohvyvf

For Warren, shrinking Amazon's market share will mean more choice for consumers. But as Reason's Peter Suderman has argued, "the most immediate and obvious effect is that consumers would lose inexpensive, reliable options."

Joining the Prime Day pile-on was Sen. Bernie Sanders (I–Vt.). The 2020 presidential candidate and arch Amazon-critic tweeted out support for workers at an Amazon fulfillment center in Minnesota who had walked off the job Monday to protest what they say are unsafe working conditions and overly-onerous performance goals.

"A higher wage is only one component of the fight for workers' rights. Amazon workers deserve safe working conditions, fair scheduling, and reasonable production demands," said Sanders on Twitter.

A higher wage is only one component of the fight for workers' rights. Amazon workers deserve safe working conditions, fair scheduling, and reasonable production demands. I stand with Amazon MSP1 workers in Minnesota and their #PrimeDayAmazon strike! https://t.co/zmCUCpc0F1

Last year, Sanders introduced the Stop BEZOS Act (a reference to Amazon CEO Jeff Bezos). The bill would impose a tax on large companies equal to the value of the public subsidies that its workers receive, the idea being that Amazon's failure to pay higher wages was forcing its employees to rely on welfare.

Critics have pointed out that Sanders' bill would essentially act as a tax on hiring poor workers who rely on public assistance.

Amazon itself has called Sanders' criticisms of its wages and working conditions unfair and inaccurate, saying that it pays all its full-time fulfillment center workers over $15 an hour on top of heath, retirement, and education benefits. The company also pays its temporary and part-time workers a minimum wage of $15 per hour, but those workers do not receive the same level of fringe benefits.

Although he was embroiled in other Twitter controversies on Prime Day, President Donald Trump has echoed some of his Democratic opponents' criticisms of Amazon. Last year Trump said the market power of companies like Amazon, Facebook, and Google represented "a very antitrust situation."

In addition to their numerous practical deficiencies, the presidential contenders' anti-Amazon policies reveal a conceptual error. Neither Warren nor Sanders appreciates how the online retail giant's services benefit all workers.

Amazon's online store gives people access to a wider variety of often cheaper, sometimes better-quality goods than what they would've traditionally been able to find at brick-and-mortar retail outlets. Its existence saves workers money while expanding the choices available to them.

Economist Joseph Schumpeter once wrote that "the capitalist achievement does not typically consist in providing more silk stockings for queens but in bringing them within reach of factory girls."

Amazon's managed to do this for a lot more products than just silk stockings.

Scarlett Johansson sparked alleged outrage over the weekend after defending the idea that she, a professional actress, should be permitted to play characters of different races or genders. On Friday, British tabloid The Daily Mail published portions of an interview Johansson did with As If magazine in which she said she "should be allowed to play any person, or any tree, or any animal because that is my job."

The Avengers star attracted controversy last year when she was cast to play a trans man in the movie Rub and Tug, a role she ultimately withdrew from.

Her latest comments led to a lot of sarcastic tweets about Johansson playing trees.

scarlett johansson's most underrated roles but probably her best pic.twitter.com/bKHD356c1V

According to Vanity Fair, CNN, and the Los Angeles Times, her comments also sparked outrage, although that also appears to be limited to a handful of tweets.

Nevertheless, by Monday, Johansson had released a statement criticizing the tabloid for taking her remarks out of context and stressing her commitment to increased minority representation in Hollywood.

She also defended the substance of her remarks, saying in a statement to the Los Angeles Times that "in an ideal world, any actor should be able to play anybody and art, in all forms, should be immune to political correctness."

Blackstone Group, a major investment firm, has said that it will stop repairs at some of the New York City apartment buildings it owns following the state legislature's passage of major new rental regulations. The new laws, passed in June, limit the rent increases landlords are able to pass on to tenants to cover the costs of repairs and building improvements.

A source with direct knowledge of Blackstone's plans for the sprawling properties, which together count more than 11,000 units, said that renovations to vacant units would stop, as would potentially larger construction projects. Urgent maintenance such as repairs to fix leaks or hot water service—which is required by law—will continue to be made, the source said.

Critics of New York's new rental law argue that placing stricter limits on what renovation and repair costs landlords can pass on to tenants would disincentivize them from carrying out new renovations, leading to "shabbification." Apparently, that's already happening.