The law is an ass, cleft and all. 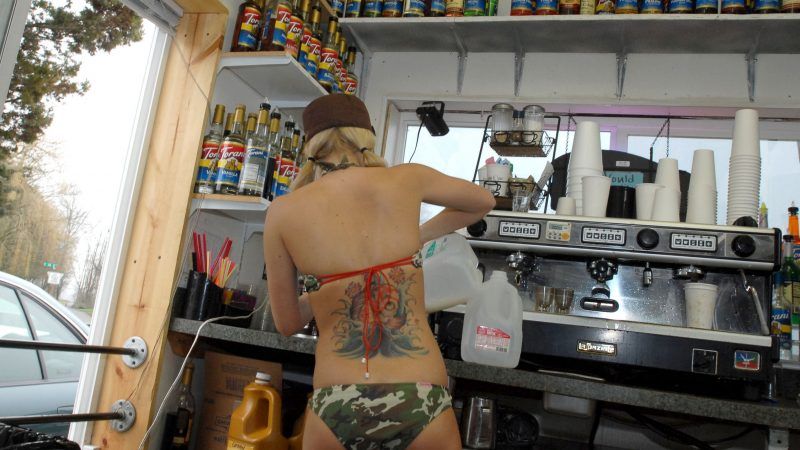 Last week a federal appeals court ruled bikini-clad baristas in Everett, Washington, will have to cover up while they make coffee and serve customers.

As I detailed in a 2017 column, the bikini-barista business model, which is popular in my home of Washington State, features baristas in small coffee stands who wear skimpy attire while serving coffee to customers through a drive-up window. Everett officials, who claim the bikini barista stands are responsible for "prostitution and sexual violence," adopted a pair of moralistic ordinances to combat them two years ago.

That spurred the lawsuit, filed by several baristas and their employer.

In a 24-page opinion, a Ninth Circuit Court of Appeals panel ruled that the U.S. District Court in Seattle erred in granting a temporary injunction that had barred Everett officials from enforcing the ban while the suit proceeded. The Ninth Circuit rejected the argument that the law violates the baristas' First Amendment right to free expression and lifted the injunction, meaning the ban is back on while the lawsuit proceeds in district court.

The Everett crackdown traces its origin to a series of complaints that began in the city nearly a decade ago. Accusers included an apparently eagle-eyed mother who told Everett police that while driving by a coffee stand she saw a customer grope a bikini-clad barista's "intimate areas" while the next customer in line "was clearly touching his genitals through his clothes as he was waiting his turn."

That same Supreme Court has long held that the First Amendment protects "expressive conduct," generally conduct or actions intended to convey a message or idea. The baristas, the Ninth Circuit noted, say they wear bikinis to convey a message "relating to empowerment and confidence." But the Ninth Circuit, which appears to understand the baristas' expressive conduct just fine, nevertheless ruled that even if the baristas are engaging in expressive conduct through their actions, that conduct is not protected by the First Amendment because the baristas "fail[ed] to show a great likelihood that their intended message will be understood by those who receive it."

The Ninth Circuit appears to understand why a barista might choose to show a little skin while working. Ultimately, though, the court seems not to respect the fact that the baristas get paid for that expressive conduct.

"The baristas' act of wearing pasties and g-strings in close proximity to paying customers creates a high likelihood that the message sent by the baristas' nearly nonexistent outfits vastly diverges from those described in plaintiffs' declarations," the court ruled. "The commercial setting and close proximity to the baristas' customers makes the difference." As support for its position, the Ninth Circuit judges refer to the fact "the baristas undisputedly solicit tips."

I spoke this week with lead plaintiff Jovanna Edge, owner of Hillbilly Hotties, a bikini barista stand in Everett. Edge, who I also spoke with for my 2017 column, called the latest ruling "a shock." Edge says she and her baristas are upset and angry. "My staff have ranged from crying asking, 'How they will put food on the table for their kids,' all the way to 'Let's run for city council,'" she says. Edge tells me she'll appeal the ruling.

Everett's bikini-barista crackdown appears to be unpopular. An informal poll run by Everett's HeraldNet website is running three to one in favor of "let[ting] the market decide based on what employers allow."

In the wake of the ruling, that option is off the table—for now at least. While Edge will appeal, the next move likely will be Everett's.

"What will be… of interest will be just how they actually intend to enforce these new laws," Edge tells me. "Is a judge going to throw us in jail for wearing what any American can see on the beach?"

"The law is an ass," the saying goes. I can confirm this to be true. Cleft and all.