She Told Him to Kill Himself. He Did. Should She Be Held Responsible? 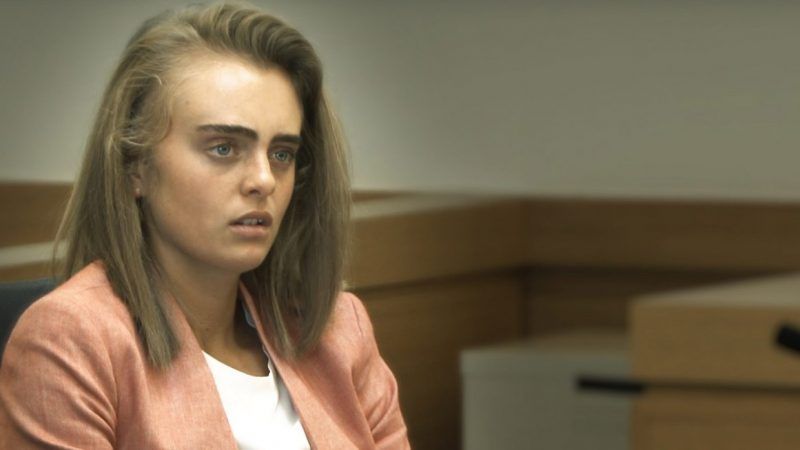 When Massachusetts police announced in 2014 that they were charging a teenage girl with manslaughter for goading her boyfriend into suicide with a series of bullying texts—some of them as he sat in his pickup truck, debating whether to switch on the motor that would poison him with carbon monoxide—there seemed little doubt of her guilt.

Not necessarily her legal guilt. Though 39 states have laws against assisting or encouraging suicide, Massachusetts wasn't one of them. And Michelle Carter was not only miles away when her boyfriend, Conrad Roy III, turned on that motor, she was just 17—a year younger than Conrad and certainly not a parent, teacher, or custodial adult. Telling him to go ahead and kill himself seemed like a mordant and horribly reprehensible exercise of First Amendment rights. To turn on its head an ancient parental rebuttal to the my-friends-told-me-to-it defense: If your friends told you to jump off the Brooklyn Bridge, would you do it? And even if the answer is yes, is it their fault?

But there was a second charge against Carter, even if it was only filed in the court of public opinion: that she was a "heartless bitch," as one reporter interviewed in the HBO documentary I Love You, Now Die called her, adding, "this coercive ice queen who killed a guy in order to become popular."

On this, the case seemed open and shut. The texts from Carter that cops found in Roy's phone, sent over a period of months, were colder than an Arctic night. When he said he wasn't sure how to do it, Carter's reply sounded like a macabre take on Paul Simon: "Drink bleach. Why don't you just drink bleach? Hang yourself. Jump over a building, stab yourself, idk. There's a lot of ways."

And in another text to a friend after Roy's body was found, Carter seemed to confess. "His death is my fault like honestly I could have stopped him," she wrote. "I was on the phone with him and he got out of the car because it was working and he got scared and I fucking told him to get back in." Small wonder that a local woman asked by a TV reporter what she thought of the case replied, "You little snot, how could you do that to a human being, you 90210 piece of crap?"

In fact, there was a lot more to the story, as the fascinating and often horrifying I Love You, Now Die—one of three two-part crime documentaries HBO will air this month—makes clear. Carter and Roy played out a fantasy that they were a millennial Romeo and Juliet, their passions fed by anti-depressants and a mutual fascination with suicide, wooing each other not with poetry but plagiarized texts.

Living in different but nearby towns in the southern leg of Massachusetts, they met in Florida, where their families were both vacationing and almost instantly bonded, in no small part over their social anxiety, clinical depression, suicide attempts (one for her, at least four for him) and disturbingly dark worldviews. When Roy confided he'd seen the devil—it's not clear if he's speaking metaphorically or literally—Carter quickly declares she does, too. "A lot, actually," she adds.

But their relationship was almost entirely digital. After returning home, they met no more than five times over the next two years, yet bombarded one another with thousands of texts, many of their lines purloined from the teen-angst TV musical Glee. How much of their hellbound race was real and how much was fantasy—and whether they understood the difference—is an open question.

What is clear is that Carter didn't plant the idea of killing himself in Roy's head. If the texts themselves weren't convincing enough that he was obsessed with the idea, the videos and notebooks full of suicide notes and bleak self-appraisals like "There's something wrong with me," surely are. But if Carter wasn't the intellectual author of Roy's death wish, neither did she report it to his parents or doctors or anybody else who might have helped him.

And in the final two weeks before his death, Carter seemed to actively encourage him, badgering him about where and when he planned to follow through on his threats: "The time is right and you're ready, you just need to do it!"

She even seems to have staged a sort of dry run 48 hours before his suicide, texting other girls at her school that her out-of-town boyfriend had disappeared and she was afraid he had killed himself. "It's all my fault," she wrote. "I was supposed to save him he needed me. I let him down."

Actually, as Carter was well aware, Roy was very much alive and deluging her with texts. Her attorney and expert psychiatric witnesses would later heap scorn on the prosecution's theory that she was setting herself up as the "grieving girlfriend" who needed social support, but they didn't have any alternative explanation.

That wasn't the only weakness in their case. Carter's most sensible defense—that words are not weapons, whatever she may have told Roy, he didn't have to do it—had been obliterated before the trial when the Massachusetts Supreme Court refused to quash her indictment.

Instead, they argued that the single most damning piece of evidence against Carter—her texted confession to a friend that she ordered Roy back into the carbon-monoxide-filled car when his resolve wavered—was a lie to gain perverse sympathy (oddly mirroring, in a way, the prosecution's "grieving girlfriend" scenario). And perhaps if Carter made that claim from the witness stand, it would have worked. But she didn't testify.

That sealed her fate, legally; she was convicted of manslaughter. And in the court of public opinion, she fared even worse. "If you're gonna do a last tweet," Carter wrote to Roy, "can it be about me?" The rest was silence.