McAfee lauds Che Guevara for being revolutionary and thinks Cuba is his last chance to avoid extradition for tax crimes. 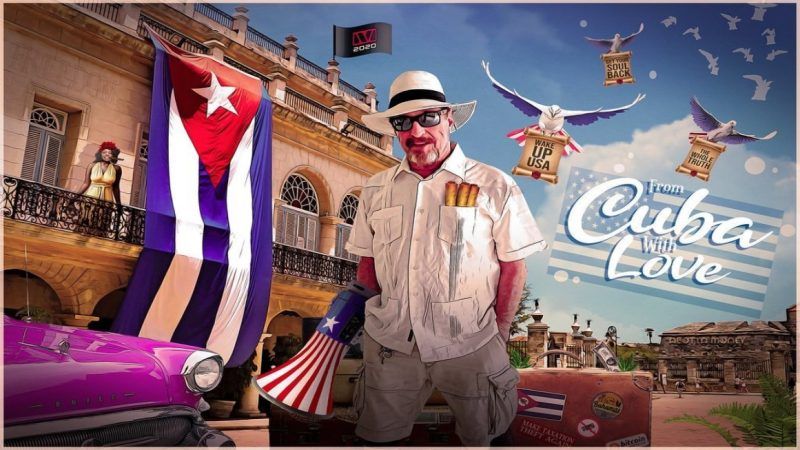 "If Cuba extradites me, I will be silenced forever," John McAfee told me today by phone from Cuba, his new home base for a campaign to be the Libertarian Party's presidential nominee in 2020.

The founder of the ubiquitous anti-virus computer software company named for him, McAfee finished third for the Libertarian Party's (L.P.) presidential nomination in 2016. Now a cryptocurrency booster and entrepreneur, he's having another run.

McAfee knows there's essentially no chance that an L.P. presidential candidate can win the presidency in 2020. But he is also confident that a grand jury is currently convening and will indict him for tax-related crimes. He admits he hasn't paid income taxes in eight years and says he does not intend to do so ever again. McAfee announced back in January he'd have to campaign in exile.

For the past few months, he had been hanging out in the Bahamas. He chose the Carribean nation because the U.S.-Bahamian extradition treaty says that extraditable crimes must be a crime in both nations, and the Bahamas have no income tax.

However, McAfee said today that he became aware, through means he won't specify, that either the CIA or FBI was about to nab him on trumped-up charges of "murder, money laundering, racketeering, whatever racketeering is, under guise of forcing extradition, then dropping those charges" when they got him back to the U.S. and nailing him for the income tax evasion. "I cannot tell you how I know, but I am John McAfee, one of the greatest cybersecurity experts in the world, and nothing gets by me," he says.

Despite being forced to Cuba by circumstances beyond his control, McAfee says he's enjoying his stay. While U.S. propaganda paints the country as relentlessly grey due to decades of communism, McAfee is finding it to be "party central" with wonderfully congenial people. He added that since the U.S. never let Cuba alone, we can't be sure how much of their relative economic stagnation is the fault of their system or our meddling, though he grants their economic system was far from libertarian. He also believes that the history of U.S.-Cuban relations, recently made worse by the Trump administration, leave him relatively safe to wage his campaign for president of the United States without worrying Cuba will extradite him, should official charges against him be issued.

That most of what we know and understand about our government and the world is the result of "propaganda" was a recurring theme in our phone conversation. That conviction explains why McAfee refuses to play the candidate game of spitballing about policy for the Middle East, immigration, or any other realm where he thinks the government is hiding the truth. For instance, because media and government stories depict a Cuba far grimmer than the one he's currently living in, McAfee wonders "how on earth are [Americans] to have a fucking clue about what to do about Cuba? Anyway it's not our goddamn problem, is it? We have problems of our own, what the fuck are we worrying about Cuba for?"

He also tweeted praise this week for Marxist revolutionary Che Guevara, which lost him at least some Libertarian support. McAfee insists most who hate Guevara "haven't actually read history, his biography, his actual diary." McAfee believes Guevara "freed a couple of countries from the worst kinds of fascist dictatorship."

In the poll-free world of Libertarian primary politics, it's difficult to know which candidates have juice and which don't. Last night, McAfee called on his supporters on Twitter (where he has 980,000 followers) to email me directly to state their support for his candidacy; about 75 folks have done that as of this writing, with many claiming they are millennials, a demographic to which McAfee thinks he has special appeal.

"I hear very little buzz about McAfee this time around," Libertarian National Committee Chair Nicholas Sarwark says via email. "Most of the activists who were supporting him last time have moved on to other things or other candidates and are not even keeping up with his travels through the Caribbean." Additionally, says Sarwark, "making a defense of Che Guevara from Cuba may ingratiate him with the Cuban government, but it didn't resonate well with Libertarians."

Christian Ehmling, a Libertarian supporter who has run for state office as a Republican, announced on Facebook yesterday that although McAfee had once been his "top choice," the virus software pioneer's apparent affection for Guevara lost him the goodwill Ehmling felt for his "dodging the IRS." McAfee's tax evasion was something Ehmling "could get behind," but he "cannot ever support anyone who is defending a man whose ideology led to the deaths of millions, and who called for the killings of racial minorities, homosexuals, and those with different beliefs."

Joshua Smith, an at-large member of the L.P.'s national committee, also wrote on Facebook that "as someone who has been able to travel around the country talking to Libertarians, [McAfee] has very little support within the party currently, and with his newest comment applauding the communist who had gays and minorities executed, he will have even less."

"Go ahead and get upset" was McAfee's message to Libertarians unhappy with tweeted support for a bloody Communist revolutionary. "I'm for revolutionary people. What does that mean? It means not just talking bullshit, saying 'Hey I hate taxes.' Look at what people actually do, for fuck's sake. I stood up and said 'no' [to being taxed] and I deserve respect for that. At least I stood up and did something and that's what Che did.

"It's hard to judge a person's life based on isolated instances here or there. He stood up and acted on his beliefs and whether I believe the same [as Guevara] or not, I could give a shit; he stood up and acted and how many people in the L.P. are standing up for what they fucking believe, I ask you that?"

Desarae Lindsey, who coordinated volunteers for McAfee in 2016, once thought he could be the Libertarians' Donald Trump. She was involved with an operation McAfee helped launch after his presidential run called Vote Different, but thinks he dropped the ball in continuing to push for that endeavor, which made her lose enthusiasm for him. She is now campaign manager for Vermin Supreme, and believes she's not alone in moving on from McAfee. (Lindsey believes that the L.P. needs colorful, humorous, outrageous standard-bearers).

Rob Loggia, McAfee's current campaign manager and a veteran of his 2016 operation, said in a phone interview this week that they still intend to have masked surrogates appear on McAfee's behalf at L.P. conventions and events through the campaign season, which doesn't end until the assembled delegates of the Libertarian Party's national convention choose their candidate in May 2020. The masks portraying McAfee's visage "are real, and in the hands of hundreds of volunteers already," Loggia said.

As for McAfee's lack of personal availability: it is only an issue "if you are thinking in terms of the way a campaign is traditionally run," Loggia said. That's not McAfee's goal; Loggia notes his candidate has promised that if he's elected to the presidency, he will "lock himself in a room and not come out on inauguration day."

Running a campaign from Cuba is something Loggia thinks "people have to pay attention to" and doubts that it will be a deal-killer in winning the L.P. nomination, though he admits the eventual delegate mix at the 2020 national convention in Austin would have to be more McAfee types and less L.P. traditionalists if McAfee hopes to win. Because delegates to the national convention are chosen at state conventions, that would require quite a ground game.

But while Loggia says his candidate is seriously running for the nomination, he admits that even if McAfee loses, the exiled candidate "will not feel he's wasted his time" and will appreciate the opportunities along the way to "be part of the national conversation." While they have not yet begun reaching out directly to supporters in a traditional campaign messaging way, Loggia says their email blasts could probably reach 15,000 people, and that McAfee's tweets reach nearly a million.

Loggia has never voted for president and thinks his candidate's most likely audience is some portion of the vast near-majority of Americans who also sit out each national election for lack of a candidate who doesn't seem just one more tool of a corrupt system. Loggia, who has worked with McAfee on both campaigns and in crypto businesses, says his candidate is the greatest "mirror" he's ever encountered, and that if you have a bad time relating with John McAfee, the problem might well be with yourself.

They are not fundraising for the campaign right now, Loggia says, and McAfee says he is on his travels "living off the kindness of friends; quite frankly, in my life, I've benefitted thousands and some of those people are now benefitting me."

McAfee has no illusions about his chances in a general election, but still thinks he's in there swinging with the L.P. "Running for president gives me the right to stand up and say I've got coordinators in five regions of the U.S. and tons of volunteers and I'm actually doing something, and if that's not running for president I don't know what is."

It also gives him a forum to "talk to the press, tell my opinions to everyone" and get across his message that the U.S. government is more or less an impenetrable criminal conspiracy of liars, and that he's against it—so against it he's chosen to stop funding it and has, in fact, left it. For now.