Sharing Food with Migrants Is a Charitable Act To be Praised, Not Criminalized

Americans have long provided migrants with food and water. Why are we now treating that like a crime? 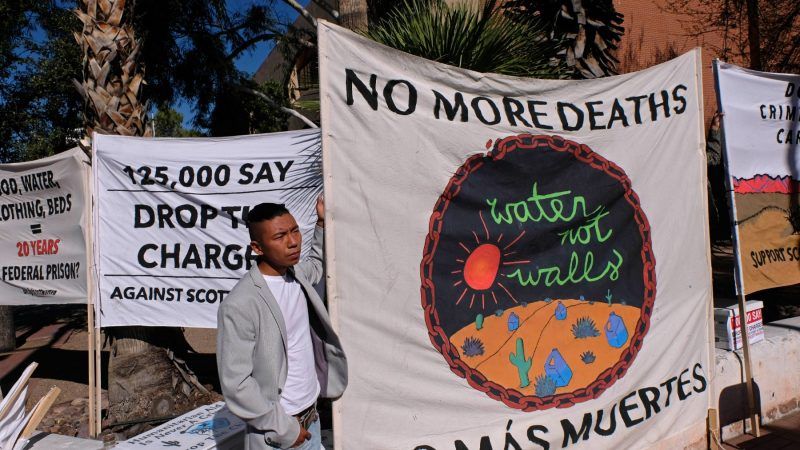 Members of No More Deaths rally outside of Tucson Federal Court in support of Scott Warren. (Christopher Brown/ZUMA Press/Newscom)

Scott Warren, a geographer from Arizona, is currently on trial in federal court. He's charged with human trafficking and other crimes.

Last year, Warren joined with other volunteers along the U.S.-Mexico border to provide food and water to migrants traversing the desert, where migrants can easily die of thirst, exposure, and other causes. (Occasionally, as happened in April, migrants also die crossing the Canadian border.)

Warren and his fellow volunteers knew that providing food and water can help save lives. So that's what they did.

In an account in the Washington Post this week, Warren details how border patrol agents set upon him and two migrants he was aiding. The agents arrested the migrants. Then they arrested Warren.

Warren, who deserves thanks from every American, faces up to 20 years in federal prison for his acts of charity.

Warren volunteers with the southern Arizona-based community and faith-based coalition No More Deaths, which works "to stop the deaths of migrants in the desert" along the border. That mission has put No More Deaths in the proverbial crosshairs of law enforcement officials. Warren was arrested soon after No More Deaths posted a video of U.S. Border Patrol agents knocking over and emptying water jugs placed in the desert to aid migrants.

In January, four members of No More Deaths were found guilty on misdemeanor charges that brought fines and possible jail time. They were found to have failed to obtain permits to enter federal lands, and violating other rules. Another quartet was found guilty of similar charges in March. Others had their charges dropped after agreeing to pay fines.

It's clear the charges against Scott Warren and the others are, literally and figuratively, trumped up.

Cracking down on immigration and immigrants is one of many sordid hallmarks of President Donald Trump's administration. But the Trump administration isn't just barring people like Warren from sharing food with migrants. It's also failing to adequately feed and care for migrants it places in custody—sometimes with tragic results. Jakelin Caal Maquin died while in federal government custody, I wrote last year. "Reports suggest [the seven-year old] may have died from a lack of food and water."

Maquin is one of at least seven migrant children to die in U.S. government custody.

It's hard to see how implementing immigration policies that kill people "serves the national interest."

The Trump administration didn't invent awful immigration policies. Neither does it have a monopoly on criminalizing the sharing of food. In fact, the trumped-up charges against Scott Warren and others are just the latest evidence that politicians are increasingly intolerant of those who engage in the simple act of sharing food with those in need.

A slew of big U.S. cities—Houston, Las Vegas, Fort Lauderdale, New York City, Philadelphia, Dallas, and San Antonio, to name a few—have criminalized sharing food with the homeless and others in need, as I've discussed in numerous columns and detail in my recent book, Biting the Hands that Feed Us: How Fewer, Smarter Laws Would Make Our Food System More Sustainable.

These draconian federal and local policies run counter to American values. There's a long history in this country of private charities, individuals, and businesses feeding those in need, including migrants.

"Organizations such as the Italian Welfare League in New York distributed food to newly arrived immigrants in need," writes Hasia Diner in her 2001 book Hungering for America: Italian, Irish, and Jewish Foodways in the Age of Migration. "Relying upon local food merchants for donations, volunteers for charity distributed… 'food that Italians like.'"

That's the America—and the Americans—I know. Aiding those in need shows America at her best. Prosecuting Scott Warren, and others who save migrant lives, shows us at our worst.