Rebellious Teens Give Us Hope for the Future 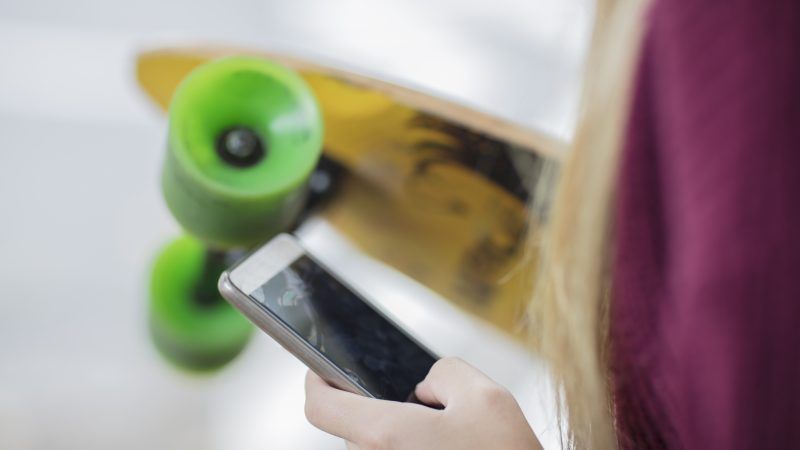 A few years ago, a friend of mine told me that he'd caught his grounded pre-teen son surfing the Internet on an old iPhone he'd rescued from a drawer. What he was surfing got him grounded again; his tech savvy landed him at computer camp, with a bright and authority-resistant future looming. That kid is likely to have some company in his coming endeavors. Amidst concerns that too many young Americans are growing up intolerant and authoritarian in their approach to the world, there's also strong evidence that they retain a rebellious streak and the ingenuity to evade control.

Maybe the next generation is already poised to break the chains it's forging.

"In almost every high school across the country there is a kid who sells burner phones from their locker," Rich Wistocki, a retired detective, told the Wall Street Journal.

"Burner phones," in teen parlance, refer not just to the cheap, prepaid cell phones of spy novels, but also to discarded phones that can still hold a charge and remain WiFi-capable—like the old iPhone that caused so much excitement in my friend's home.

Even on permitted devices checked by parents, kids can be tricky.

"Teens are storing risqué photos in disguised vault apps, and then trading those photos like baseball cards," the Associated Press reported last year.

Kids use the burner phones and disguised apps to evade parental controls on social media use, limits on screen time, and monitoring of personal interactions. To some extent, it's the modern equivalent of hiding skin magazines behind air vent grills and placing calls to disapproved boyfriends and girlfriends from obliging friends' houses, as was common for previous generations. It's part of the age-old process of building autonomy on the part of teens who are groping their ways toward adulthood—and bringing, inevitably, a whole lot of bad judgment to the party.

So, if this is just the latest manifestation of teen rebellion, why is it worth even a tepid celebration? Because, frankly, it hasn't been entirely clear in recent years that the rising generation has it in them.

"The developmental trajectory of adolescence has slowed, with teens growing up more slowly than they once did," according to a 2017 study published in Child Development.

Especially worrisome has been the accumulating evidence that a big part of what's being delayed—maybe forever—is the ability to peacefully engage with people who possess different values, world views, and opinions.

"Throughout Greg's career, the calls for campus censorship had generally come from administrators," Foundation for Individual Rights in Education (FIRE) president Greg Lukianoff and social psychologist Jonathan Haidt write in their 2018 book, The Coddling of the American Mind.  But now he "noticed an intensified push from students for school administrators to disinvite speakers whose ideas the students found offensive."

"We find that students strongly support protection of  their  rights  and  liberties—and of freedom of speech,  in  particular—when asked questions about them in general terms," Lukianoff's FIRE noted of the results of a survey published in January 2019. But "when students are asked more specific questions about the limits of free speech or the content of speech, their support for the protection of speech declines."

Tellingly, 57 percent of students think colleges should be able to restrict the expression of political views they deem hurtful or offensive.

"Among older generations, the devotion to democracy is about as fervent and widespread as one might expect," authors Roberto Stefan Foa and Yascha Mounk found in their 2016 study of political values. But they found growing support among younger Americans for the proposition that democracy is a "bad" or "very bad" way of running the country.  This is coupled with declining support among the young for the idea that it is "absolutely essential" that "civil rights protect people's liberty."

Trends come and go, of course, and maybe declining support for open societies and civil liberties is just a fad that will pass with time. But it appears that, before times change again, the trends we'll have to weather include a few purges and torch-lit rallies.

So there's reassurance to be found in signs that today's teens are as irresponsibly rebellious as ever. Burner phones, vault apps, and profoundly stupid judgment as to when to flout the rules are refreshingly normal for a generation that many of us fret is abnormal in the way it engages with authority.

That doesn't mean defiant high school kids are necessarily budding Henry David Thoreaus and Frederick Douglasses. But it's hard to imagine that teens willing to buck their parents over nude pics and social media accounts will willingly let others tell them what to say and think.

I hope there's some consolation to be found here for my perturbed buddy as he resets his WiFi password, yet again. That kid who gave him such a hard time, and his like-minded friends, may be the liberators of the future.

No, these potentially encouraging indicators don't eliminate the modern world's intolerant excesses. Last weekend, spineless Harvard administrators caved to student demands that they remove law professor Ronald Sullivan as faculty dean of an undergraduate residence because he represented a Harvey Weinstein, who the mob believes is unworthy of legal representation.

But the picks to the manacles being forged by today's authoritarians may well be hidden in the disguised apps of young dumbasses whose heads you want to bounce off the wall. May they be just as much of a pain in the ass to their bossy peers.