Kamala Harris Wants to Be Your Online Censor-in-Chief

Resist when politicians declare that speech (even radical speech) is a “threat to our democracy.” 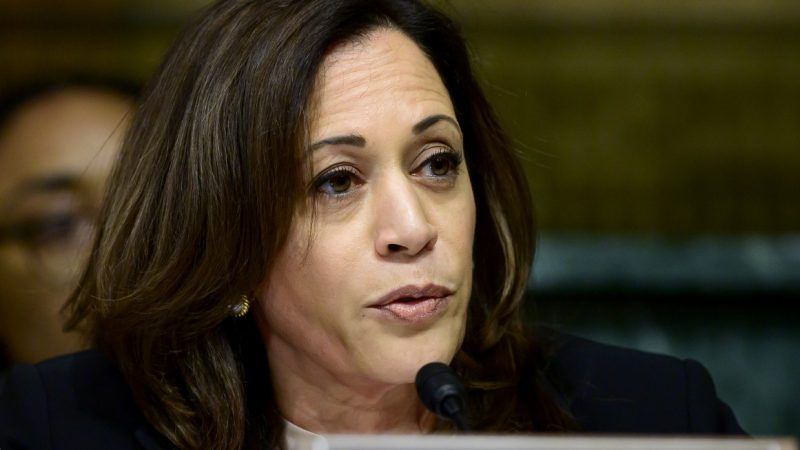 Sen. Kamala Harris is making the potential punishment of social media platforms that don't censor what she sees as hateful speech a focal point of her presidential campaign.

In a speech in Detroit before the National Association for the Advancement of Colored People (NAACP), Harris discussed the growth of domestic terrorism in the United States (and elsewhere), and how those attackers used or embraced radically violent ideas on social media.

Harris wants social media to do more to stop such ideas from being expressed and spread online. It's not clear what she thinks the companies should specifically do, but she's definitely laying the blame on Facebook and Twitter and YouTube for the existence and proliferation of angry people online. Here's the full quote from her speech:

We will hold social media platforms responsible for the hate infiltrating their platforms, because they have a responsibility to help fight against this threat to our democracy. And if you profit off of hate—if you act as a megaphone for misinformation or cyberwarfare, if you don't police your platforms—we are going to hold you accountable as a community.

It's meaningless anger that feels deliberately substance-free because, really, what she wants with her prosecutor background is to force compliance with whatever rules she puts into place and use the threat of punishment to shut down resistance.

But we know from the horrifying Christchurch, New Zealand, mass murder that these social media platforms were trying as hard as they could to remove videos the shooter was livestreaming and to take down copies as soon as they were posted.

By blaming social media platforms, Harris is confusing the symptom (online expression of violent ideas) with the actual problem (the cultural expansion of more overt desires to punish and hurt the "other"). But the thing about social media platforms is that they are the creations of tangible companies. Harris' mindset is that the threat of punishment is a tool to force compliance to whatever goals she sees as serving "the community," as she defines it. Just ask California parents who were threatened with jail time because of her support for criminal truancy laws when she was a district attorney in San Francisco, and then again later when she was attorney general. She didn't want to send parents to jail, mind you. But she was willing to use the law to allow that to happen in order to achieve the goal she wanted.

And we know that Harris already has a record of trying to punish online companies for speech she doesn't approve of. She attempted to bring pimping charges against the publishers of Backpage to try to punish them for sex-trafficking advertisements that appeared on the site.

In this case, her goal is logistically unrealistic. Online communication platforms aren't like newspapers or television shows or radio programs. It's not feasible to expect that social media platforms will be able to accomplish what Harris wants. Instead, her agenda would result in a massive regime of censorship with unpredictable behavior that inspires outrage from those who get targeted. Government-mandated censorship does not lead to peaceful, democratic societies. It leads to anger and rebellion.

We should all be horrified that a candidate for president of the United States believes that unfettered speech is a threat to democracy. But there is some good news: namely, a distinct lack of reaction from the audience. This was a friendly crowd. Her speech was seeded with applause lines, and the listeners typically obliged. But after the above quote (about two-thirds of the way through the speech) there was mostly silence from what I could hear. One person sounded like they shouted words of support. You can listen to yourself here (it's about 12:30 minutes in).

I wouldn't necessarily make too much of the lack of response, but it's perhaps a good indicator that while the desire to control or punish social media platforms may be in the front of politicians' minds, it is not necessarily something that animates the public. Of course, politicians would be the first to benefit from the power to control what messages are allowed on social media—all in the name of protecting "democracy."

Bonus link: Over in Europe, online privacy censorship demands (and the technological challenges of trying to comply with them) are being used as a tool by government officials to extract money from rich tech companies. Andrea O'Sullivan explains how. As California's attorney general, Harris' office did attempt to go after airlines and extract money from them because their apps weren't in compliance with California's privacy policy labeling laws. She failed in that effort, but she knows full well that complex online platform regulations are a way to generate revenue.