Plus: FOSTA challenge gets boost from state prosecutors, the trouble with "democracy dollars," and more... 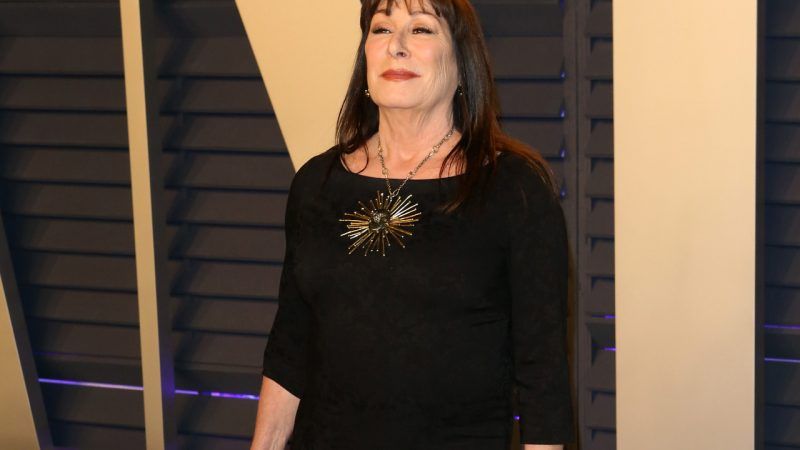 Would she work with Woody Allen again? She would. I've been out of the loop the past few days, in recovery from having two wisdom teeth removed, but in my limited purview the best (and most controversial) thing on the internet in that time has been Vulture's interview with actress Anjelica Huston. In a wide-ranging interview conducted by Andrew Goldman, Huston touches on everything from her famous father to why she doesn't like edibles, how Bill Murray snubbed her on the Life Aquatic set, Oprah's beef with her, and Jack Nicholson's cocaine habits.

Of course, the part that's been generating some of the most attention is Huston saying she would work with Woody Allen again.

You were in two Woody Allen films, Crimes and Misdemeanors, alongside Mia Farrow, and then Manhattan Murder Mystery. Woody Allen is basically unable to make films now because of the outcry about the molestation allegations.
I think that's after two states investigated him, and neither of them prosecuted him.

Well, the industry seems to be treating him as though he's guilty. Would you work with him again?
Yeah, in a second.

Huston touches on Roman Polanski, too, in what critics have been describing as a "defense" of the disgraced director. But the answer given by Huston—whose "first serious boyfriend" was 42 when she was 18, and who earlier in the interview mentions wishing she could've been in Romeo & Juliet as a teen so she could've been "off in Italy having a romance on set with Franco Zeffirelli"—is more an offering of context than absolution:

You were arrested because you happened to be in Jack's house when Roman Polanski raped 13-year-old Samantha Geimer. How did you feel about that?
Well, see, it's a story that could've happened ten years before in England or France or Italy or Spain or Portugal, and no one would've heard anything about it. And that's how these guys enjoy their time. It was a whole playboy movement in France when I was a young girl, 15, 16 years old, doing my first collections. You would go to Régine or Castel in Paris, and the older guys would all hit on you. Any club you cared to mention in Europe. It was de rigueur for most of those guys like Roman who had grown up with the European sensibility.

Huston situates Polanski's attitudes and acts as products of their time period but also not all that different than the attitudes many men in Hollywood have toward women today. Far from downplaying the depravity, she refuses to simply position Polanski and/or that era as an anomaly which we can condemn from a safe and smug distance while congratulating everyone on how far they've come:


Among a lot of Hollywood men, it was acceptable at that time to treat women as though they were disposable.
I think they're still doing it. I was at the hairdresser's yesterday, and I heard tales of such horror from women. There was one other client and two girls who were working in this rather small hairdressing shop. And one of the girls had been passed a Mickey Finn in a bar and had woken up on a couch with a guy ejaculating wildly all over her face. And as she was telling the story, another girl who worked in the salon came in and said, "The weirdest thing happened to my friend last night. She was found at four in the morning in the Wilshire district, coatless, shoeless, with scratches and bruises all over her body. She doesn't know whether she was raped. So, I'm trying to stop her from having a bath because we need to get her to the police."

Later, Goldman asks Huston if she had any "#MeToo experiences":

What happened?
You'd have to ask me that on a daily basis, practically. That's how often it happens, that you're objectified, or misread, or put down. I think men do it a lot, and I don't really think half the time they know what they're doing. That's how inured they are.

Huston goes on to say she "didn't think [Supreme Court Justice] Brett Kavanaugh was all that believable."

Throughout the interview, her answers are candid and colorful while failing to fall into neat liberal/conservative (or woke/canceled) lines. Ignore the Twitter haters, and read the whole thing for yourself here.

The important thing to remember about this appeal is that the question before the appeals court isn't really about the constitutionality of FOSTA itself. What's being appealed is the case having been dismissed for lack of standing by the plaintiffs. The district court never directly ruled on the constitutionality of the law; it only ruled that these plaintiffs had no right to complain about it to the courts. According to the district court these plaintiffs weren't being hurt, or likely to be hurt, by FOSTA, and so it dismissed their case. What the parties are fighting about now is whether this assessment by the district court was right.

For the plaintiffs it makes sense to keep pressing the constitutional issue because shining a light on the unconstitutionality of the law illuminates the injury the unconstitutionality has already caused and will continue to cause. But the defense has a different and much simpler job. All the DOJ [Department of Justice] has to do to defend FOSTA is say is, "The district court was right. These people were not hurt by FOSTA and will not be hurt by FOSTA, so keep this case dismissed." If the appeals court agrees that there has been no injury, and that there is unlikely to be any injury, then the case remains dismissed and this constitutional challenge goes away.

Thus, Justice Department's defense has continued to be that the plaintiffs aren't actually being harmed by FOSTA. And yet, Gellis writes,

that's exactly what the amicus brief by the twenty-one state attorney generals does not do. Although it is intended to support the DOJ's defense of the statute, rather than supporting the DOJ's argument that the plaintiffs' complaints are much ado about nothing, their brief instead reads as a bright flashing neon sign warning the court that there is plenty of reason for them to be worried. Because, in contrast to the DOJ's arguments about what FOSTA does not do, this brief reads as a paean to everything FOSTA is going to let the states do, including to people just like the plaintiffs.

"Democracy Dollars." Senator and 2020 presidential hopeful Kirsten Gillibrand (D–N.Y.) yesterday proposed a plan to give every American $600 to give to politicians. Calling them "Democracy Dollars," Gillibrand is trying to sell this as a way to give big-money interests and Washington insiders less influence in politics.

Nicholas Clairmount at The Independent has a good piece on why this such a bad plan. A sample:

First, it would simply multiply the amount of money in politics by an order of magnitude, with effects that wouldn't be good for the political system at large, but would be good for ad buyers and PR flacks and political operatives….

There are roughly 235 million eligible voters in the United States. Say roughly half of them bothered to use the $600 (about 60 per cent of Americans vote in presidential years and about 40 per cent in midterm years). That means, conservatively, politicians would be looking at a little more than $70bn a cycle. What Gillibrand would have accomplished, then, if her initiative to deal with money in politics were hugely successful, would be to multiply the $6.5bn cesspit of corruption and division that is the long race for the White House by more than ten. I somehow doubt Washington's lobbyist and political operative class hates this idea.

What I just saw from the Attorney General is unacceptable. Barr must resign now.

The fallout and fanfare continues from yesterday's grilling of Attorney General Bob Barr by the Senate Judiciary Committee. Reason's Eric Boehm has torn apart Lindsey Graham's shameful performance during it.

Republicans certainly didn't have a monopoly on disgusting displays of self-aggrandizement and partisan hackery. Democrats have been using this as an opportunity to demand that Barr resign over the testimony he gave yesterday. Barr's departure would make many of us libertarians happy, but the grounds offered here just doesn't cut it, alas. Still, flimsy pretense hasn't stopped senators who are also 2020 presidential candidates from milking the opportunity for all they can…

Attorney General Barr needs to resign. Today, he's proven once again that he's more interested in protecting the president than working for the American people. We can't trust him to tell the truth, and these embarrassing displays of propaganda have to stop.

AG Barr is a disgrace, and his alarming efforts to suppress the Mueller report show that he's not a credible head of federal law enforcement. He should resign—and based on the actual facts in the Mueller report, Congress should begin impeachment proceedings against the President.

Barr was supposed to testify before the House Judiciary Committee today, but he has decided against it "following a dispute between House Democrats and the nation's top law enforcement officer over whether Barr would publicly face questions from committee staff attorneys," reports CNN.

@JoeBiden staffers just tried to remove us from what appears to be a public lot, said we could not ask questions. pic.twitter.com/NsaEyBmICw

If you are a man who believes women should be protected in the constitution from discrimination based on sex—retweet this tweet. #MenForTheERA #ERANow #ERAHearing