It's Roadkill Season, and That Tasty Carcass Isn't Getting Any Deader

New laws allow Americans to belly up to the asphalt buffet. 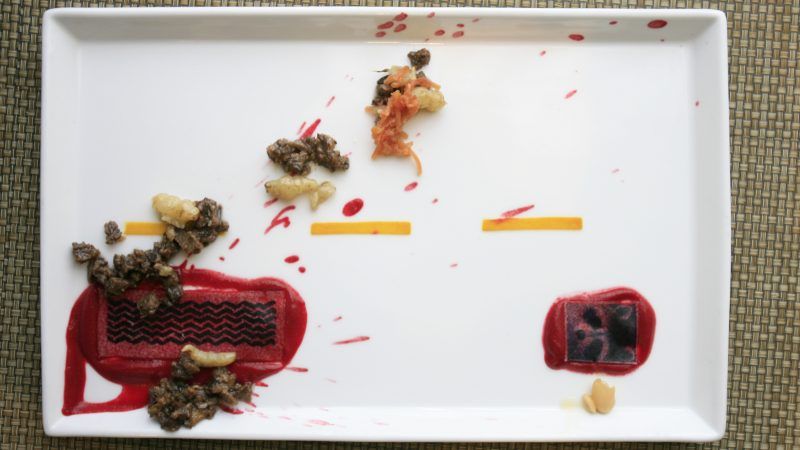 A presentation of raccoon meat resembling the scene of roadkill created by Moto executive chef Homaro Cantu, and Chris Jones, chef de cuisine, at their restaurant at Fulton Market on the west side of Chicago, Illinois. (Alex Garcia/MCT/Newscom)

Across much of America, spring heralds the arrival of flora, Cadbury Crème Eggs, baseball, halter tops, and the rotting carcasses of dead animals along the nation's roadsides. Yes, folks, it's roadkill season.

Colorado officials say thousands of deer were killed in vehicular accidents in the state last year. Missouri officials are busy stepping up their response to roadkill. And in Michigan, officials in sparsely populated Isabella County say they received nearly 900 calls to report dead deer along county roadsides last year.

These officials are concerned about roadkill because the millions of dead animals scattered across America's highways every year pose a deadly hazard not just for drivers but also for scavenging animals that prowl roadways in search of an easy meal. Roadkill begets vehicular accidents and more roadkill.

There's an easy solution to this problem: eat roadkill. Demand certainly exists. Bizarrely, though, many states prohibit the practice. In fact, as I detail in my recent book, Biting the Hands that Feed Us: How Fewer, Smarter Laws Would Make Our Food System More Sustainable, nearly half of U.S. states prohibit harvesting roadkill. Nevada, for example, conflates roadkill harvesters with poachers. Last year, a Louisiana man faced a fine of up to $750 and up to a month in jail for harvesting a dead fawn.

But help is on the way. Oregon's roadkill law, which I discussed in an earlier column, was adopted in 2017 and took effect this January. Subject to certain conditions, the law allows anyone who obtains a permit to harvest a deer or elk, which a person can eat, share, or give away. (Sorry, no skunk meat; though it's fine to harvest stink steaks in Idaho.)

The Oregon law has proven popular but—contrary to the imaginative concerns of some critics—not too popular. So far, the state has issued more than 200 cost-free roadkill-harvesting permits issued since the beginning of this year.

Roadkill is gaining acceptance in more and more legislatures. For example, a California bill introduced this session would legalize the harvesting of roadkill in that state.

So just who opposes efforts to harvest roadkill? An NBC News report last month on the loosening of roadkill laws cites folks who "worry that legalization efforts could lead to over-eager drivers striking down animals just to get a free steak."

"Our concern really is where people might intentionally hit animals for trophy or food," says John Griffin, senior director of urban wildlife programs with the Humane Society of the United States. "Like an elk or something large. It's incredibly dangerous. For both species."

Such fears are not exactly rational. Consider that hunting animals (e.g., with a firearm) is legal in some form or other in all fifty states. A hunting permit allowing you to shoot and kill Griffin's hypothetical elk—an animal that could weigh 900 lbs.—might cost you a few hundred dollars, depending on the state. That's a lot less than your funeral would cost, or—if you're somehow both stupid enough and lucky enough to survive an intentional vehicular collision with a 900 lb. animal—the cost of replacing the car or truck you destroyed when you collided with said elk.

In short, legalizing the harvesting of roadkill is probably no more likely to encourage road-rage hunting than moving deer crossing signs to areas with crosswalks is likely to reduce deer vehicular deaths.

Legalizing roadkill salvage is a win for everyone and everything involved. As I told Atlas Obscura last year, it's "a way to get people the protein they want and need and to cut down on food waste and dangerous highways."

"It stretched the political gamut," Hansell told the Statesman Journal. "You had liberal Vermont to conservative Wyoming." To Hansell's point, both hunters and PETA are also keen on the policy.

If anything can unite a divided America, maybe it's roadkill.