What To Do If You're Way Too Stoned and Freaking Out

As 4/20 approaches, we share tips for dealing with a bad high (and avoiding one). 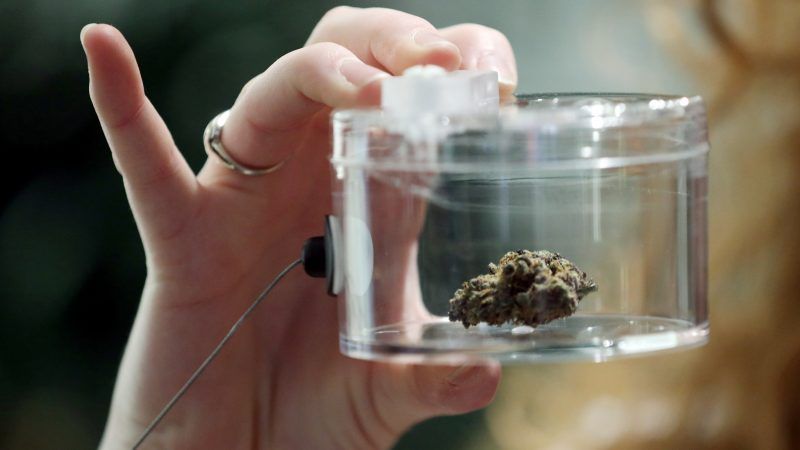 Hello, reader. If you or someone you know is currently too high, Maureen Dowd-style, then you've come to the right article.

First, the good news: You're probably fine. At some point in the very near future, your heart rate will return to normal, your anxiety will subside, the spins will stop, the lethargy will lift, your nausea will dissipate, and your mind will clear. It may take several hours—perhaps a whole day or night if you've consumed edibles—but all will once again be how it was.

Now, let's talk about what you can do to make this experience less awful, and how you can avoid having it again.

If your heart is beating out of your chest and you feel kind of crazy, know that it's more likely to be anxiety than a heart attack.

"Every E.R. chart I saw sounded the same," says Larry Bedard, a retired emergency medicine physician at Marin General Hospital in California and the former president of the American College of Emergency Physicians. "Dad had finally agreed to share a joint with his son. Fifteen minutes later he'd say, 'My chest feels tight, I feel lightheaded, maybe I'm having a heart attack, call 911.'"

If that sounds like you or a person you're worried about, Bedard says this is most likely an anxiety response.

Why does it feel like a heart problem? Because while marijuana may slow motor function and a person's sense of time, the drug also increases heart rate. Not by a dangerous amount in an otherwise heart-healthy person, but it is noticeable and can be scary.

Taking your complaint to an E.R. is an expensive way to learn that there's not much you

can do but wait it out. Of all the cannabis intoxication patients Bedard can remember seeing in his time at Marin, "not a single patient needed to be hospitalized."

If you do show up at an emergency room and report that you consumed too much marijuana, there's not much doctors can do. "Reassurance and observation," Bedard says. "Someone with vomiting may need an IV due to fluid loss, but not more than that." Maybe they'll give you some benzodiazepines to help you relax, but they can't magically (or medically!) un-high you.

"The ER is busy and stressful. It's not a great place for dealing with anxiety effects of marijuana," Grinspoon says. "If you're having anxiety, the best thing to do is remind yourself that it's not going to kill you, then find a quiet place, hold the hand of a close friend, and listen to some calming music."

(Grinspoon was quick to point out that "if someone takes a huge dose of an edible and they're a cardiac patient, then yes, they might need medical care.")

If you want to save several thousand dollars and an inquiry into your cannabis use, put on Buena Vista Social Club's 1997 self-titled album. Enya and Frank Ocean are good, too. Then, find a position that lessens your discomfort and remind yourself that the THC will eventually leave your system. (I like to lie down in a dark room and put my forearm over my eyes, or walk around in fresh air. I also find regular 'ole tap water, sipped slowly, can help settle my stomach.)

If you're nauseated or vomiting, try a hot (not scalding) bath.

Over time, chronic cannabis users can develop something called "cannabis hyperemesis syndrome," the symptoms of which are abdominal pain, nausea, and vomiting (that's what "emesis" means).

Research suggests you can curb your nausea at home by taking a hot bath. More recent studies have found that applying capsaicin cream to a person's abdomen—capsaicin being the compound that makes peppers spicy—can also relieve the symptoms of hyperemesis. These topical creams are marketed as arthritis treatments, and you can find them at your local drugstore.

Medical researchers don't know what causes hyperemesis in regular cannabis users, or why capsaicin and hot water seem to work as well as they do. Bedard warns against running the bath water too hot, as being high may impair your ability to gauge scalding water.

The only real "cure" for this syndrome is to take a break from cannabis altogether.

How does one avoid a scary cannabis experience? Know what you're taking, start low, go slow, and consider vaping or smoking if it's your first time.

1.) Know what you're taking. While it's tough to predict how you'll respond to various cannabis strains, you want to make sure that you are, in fact, taking cannabis or something made from cannabis, and that you're not taking K2 or Spice, or any other synthetic cannabis formulation. These "fake weed" products, commonly marketed as things other than fake weed, can cause both psychosis and kidney damage. While they often don't show up on drug tests and are thus popular with people in the military or on supervised release, the health risks are simply not worth the buzz.

Your weed doesn't need to be top-shelf for you to have a good time, but it does need to be real weed. As with milk products, when in doubt, throw it out.

2.) Start with a low dose. "If you're going to make a mistake on the dose, make the mistake of not taking enough and being bored, versus the mistake of taking too much and being terrified for 10 hours," Grinspoon says. "A type 1 error is not a big deal. A type 2 error makes you anxious and miserable."

For new users, that means taking a single, small pull from a hand pipe or joint, and then waiting to take another hit until you know how that first dose will affect you. If you're going to vape, ask whoever provided the device to put it on the lowest heat setting, which will provide the mildest dose.

It won't take long to figure out if you want more. "The quickest way to get a drug into your system, other than intravenously, is by inhalation," Bedard says. "The effect comes on in 15 minutes or so." Sometimes it's faster than that, sometimes a tad bit longer. The point is that a relatively short amount of time elapses between when you smoke or vape and when you know how the drug is going to affect you. Grinspoon notes that you can take more once you've assessed how you feel, but you can't dial the high down if you take too much.

If your first encounter with cannabis looks like it's going to be through a bong, ask whoever's hosting you to fill the chamber for you. Bongs can essentially be "loaded" with smoke and then shared. Once the bong has been loaded, take a very small pull and make sure you leave most of the smoke (which you'll be able to see) in the chamber.

This might feel a little embarrassing, but it's better than accidentally ripping off a huge hit, which can cause even a seasoned smoker to hate life.

3.) If it's your first time trying cannabis—ever in your life, or in many years—be very, very careful with edibles. This might seem counterintuitive. Smoke is bad, vapor could be bad, eating things is generally OK. Doesn't that mean edibles are the healthier choice? Not really. Smoking a little cannabis will not majorly hurt your lungs, while it is very difficult to consume just the right amount of an edible.

"I caution my patients who use medical marijuana to be careful with edibles," Grinspoon says. "With a vaporizer, you have a sense of your dose's impact after 15 minutes. If you need more, you can take more. But if you take too many edibles, you won't know for more than an hour, and then you can be in a really unpleasant place for as long as 10 hours."

Even well-labeled products for sale at dispensaries in states where marijuana is legal can cause problems. "Edibles work faster on an empty stomach, often much slower on a full stomach," Grinspoon says. "Absorption is different with different people, based on metabolism and body weight. Edible packaging is not reliable because it's not an exact science." And because THC is fat soluble, you'll get a different level of effect at a different time depending on the fat content of the edible product and the food you eat before or after.

If edibles are your only option, and you're feeling brave, there are some guidelines you can use to maximize your chance of having a nice experience. If you are a large person, take no more than half of the serving listed on the label, and then wait at least two hours to see how you feel. If you are a smaller person, consider taking a third or even a fourth of a serving. Heck, even a large person will feel something after a third of a serving. While homemade edibles are trickier, the half-or-less serving rule will generally keep you from going overboard.

With all edibles, it's important to wait a couple of hours before taking a second dose. THC consumed in food not only takes a while to kick in, it often lasts longer, too. If you eat half a serving at noon, become impatient and take another half at 1 p.m., and then become convinced that you are impervious to THC and take another full serving at 1:30 p.m., you will spend several hours—at least!—feeling the effects of two full servings. It will not be fun.

If you're a seasoned smoker, don't kid yourself into thinking you have the tolerance for edibles. "If someone is used to getting high pretty quickly from smoking, and then eats a large serving of an edible, they've likely got more THC in their system than they've ever had before," Bedard says.

Most importantly, remember this: "Start low, go slow, and don't overdo it," Grinspoon says. "I just tell people to trust me on this. I'm a doctor, and I'm not anti-cannabis."

And if you're unpleasantly high right now, please know that we feel for you.