These Positions Place Pete Buttigieg at Odds With Libertarians 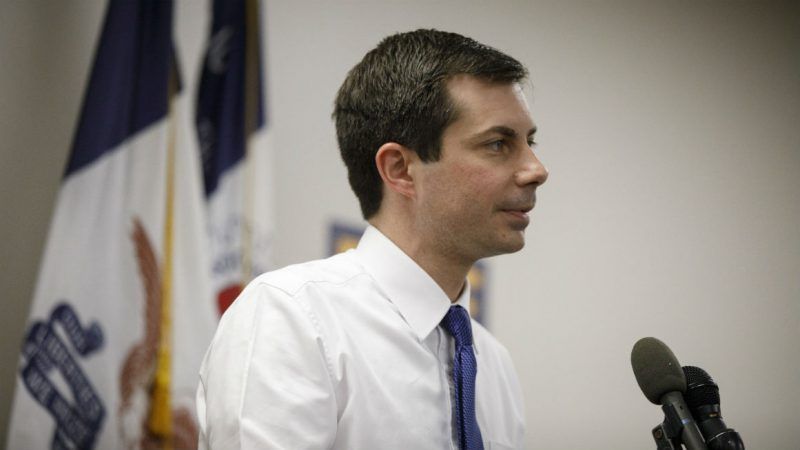 Pete Buttigieg is running for president. For libertarians, the mayor of South Bend, Indiana, appears to be a welcome addition to the far-left-leaning Democratic primary. After all, his views on foreign intervention and free college are small consolations in a field that is largely set on growing the scope of government.

Some of Buttigieg's other positions, however, put him at odds with libertarian voters.

Several Democratic candidates have expressed a desire to expand the Supreme Court in hopes of weakening the influence of conservative justices.

In a speech at the New Hampshire Institute of Politics, Buttigieg suggested expanding the court to 15 justices. This new court would be composed of five conservative justices, five liberal justices, and five rotating appellate justices, each unanimously agreed upon by their peers.

Though this proposal sounds good to those who despise simple majority decisions, it runs into a number of issues.

Besides the fact that Democratic candidates are advocating to expand the Supreme Court now that a Republican president has the power to appoint justices, Bloomberg columnist Stephen L. Carter observes that the proposal would seriously disrupt the appointments themselves. If a sitting president already makes an appointment and a second seat becomes vacant, Americans would then potentially have to wait several election cycles for the seat to be filled.

The proposal also gives justices more power by choosing who gets appointed. This both goes against an important check on the judicial branch, and is likely unconstitutional, as presidents are the only people allowed to appoint justices.

Whistleblower Chelsea Manning was previously sentenced to 35 years in prison after leaking sensitive documents about the Iraq and Afghanistan wars to Julian Assange's WikiLeaks. Her sentence was commuted by President Obama. She is currently sitting in jail after refusing to testify against WikiLeaks before a federal grand jury. In addition to criticizing Manning, the Washington establishment is also celebrating Assange's recent arrest in London.

Buttigieg is one of the politicians who is currently not in Manning's corner.

"I certainly agree that we've learned things about abuses and that one way or another that needed to come out," he said. "But in my view, the way for that to come out is through Congressional oversight, not through a breach of classified information."

Buttigieg has previously invoked his military service to criticize endless war. He's also used his experiences to speak positively about national service. Though he hasn't presented any official positions, his sentiments on the latter indicate that he would be comfortable with mandatory national service.

Earlier in the month, Buttigieg told MSNBC's Rachel Maddow that national service would be part of his campaign. While his proposal is otherwise vague, Buttigieg explained that service could be an answer to bridging social divides. Maddow responded that even the Pentagon is against conscription for the sake of morale and quality of recruits.

Beyond the Pentagon's concerns, Reason's Nick Gillespie cites Milton Friedman to argue the libertarian position on forced military service. To sum, it is better to have an all-volunteer army than "an army of slaves."

Such a casual proposal carries great repercussions for the power of choice and expression. Ideally, if American citizens were against an intervention, they would simply not sign up for the service.

Though Buttigieg has yet to truly commit to a major campaign proposal, his thoughts should not be taken lightly. If libertarians are looking for a mainstream candidate who will not join pointless wars, then Buttigieg aligns with their views. If they're looking for a firm commitment to shrinking the size and scope of government, they may not find much common ground in this candidate.