Zuckerberg's Plea: Regulate Me Before I Violate People's Privacy Again! 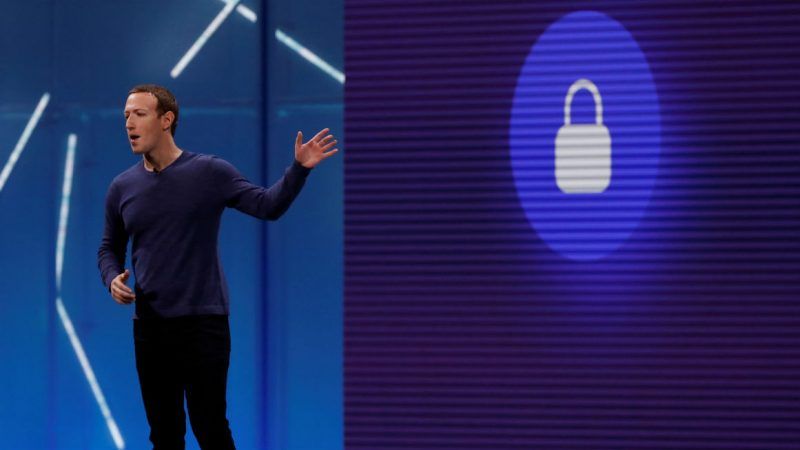 Hackers and scammers are running amok while social media platforms are harvesting our precious personal information for profit.

Sen. Ron Wyden (D–Ore.) warns that "Facebook can't be trusted to protect users' data on its own." Yet Wyden's bid to hold their feet to the fire—"It's time for Congress to step in"—barely lights a match. Facebook executives long ago called for government oversight, and CEO Mark Zuckerberg has doubled down on this hand in a Washington Post op-ed.

A reform bill by the Oregon senator would pump up the Federal Trade Commission (FTC), authorizing new staff and a big jump in potential fines for violations of law—up to 4 percent of annual revenues. The "tiny" penalties now in place, says Wyden, "are not a credible deterrent." Perhaps the FTC boost would improve customer knowledge. But it is close to an email phishing scam to argue that these measures will supply the strong consumer protection we need.

While Congress has been holding hearings, poking tech execs, and dancing the legislative Fandango, the marketplace has imposed actual sanctions. Between the time Facebook's Cambridge Analytica scandal was revealed, March of last year, and March of this year, shareholders lost more than $61.6 billion adjusted for overall market (NASDAQ) fluctuations. In contrast, Sen. Wyden's 4 percent fine—even if applied to global sales, and instantly—would whack just $2.2 billion from the Facebook moguls.

The equity tumble focused their minds. In 2018, CNN proclaimed: "Facebook is facing an existential crisis." Bumbling though Zuckerberg and COO Sheryl Sandberg may have been, they adjusted privacy settings, banned many third-party apps, and required more information from advertisers. They bought extra cybersecurity.

It is not clear where the optimal privacy protections lie, but these three things are clear.

First, Facebook is highly motivated to avoid another "existential crisis" wherein scores of billion dollar fines are imposed by markets.

Second, internet users continue to happily trade personal data for "free" social media apps. In recent laboratory experiments, Facebook users were offered money to disengage. By the prices demanded by the participants, the consumer value generated by Facebook was revealed to average about $1,000 per user per year. Regulations that limit the development of such platforms may hurt consumers as well as shareholders—and the former far more than the latter.

Third, Congress protecting our privacy…you're joking, right? In 2014 and 2015, hackers deployed by the Chinese government snuck onto U.S. government servers and helped themselves to extensive records on over 20 million Americans. The Office of Personnel Management had stored employee files unencrypted, leaving the data muffins warm and delicious. Millions lost their Social Security numbers, medical histories, and fingerprints to cyber thieves.

Amazingly, victims were kept in the dark. "The U.S. Government did not inform these victims of the appropriation for months, and never of its extent," writes The New York Times' David Sanger. The government's "only compensation was to offer a year's worth of credit report monitoring—fairly useless, given that the data thief was a state actor that apparently had (and likely still has) other crimes or compromises in mind." Former National Security Agency Chief James Clapper sarcastically congratulated Beijing: "You kind of have to salute the Chinese for what they did." Clapper testified that the massive data breach did not constitute an "attack" on U.S. citizens, but was simply part of the espionage game.

It is notable that Europe's "tough" rule imposed last May—the General Protection of Data Regulation (GDPR)—is proving a roadblock to smaller media platforms. The Los Angeles Times and many other news outlets went dark in Europe to avoid the costs of compliance. Facebook and Google also absorbed new costs—Google disclosed that it spent $100 million—but their share of online advertising has substantially increased from trend, as smaller platforms are plummeting with the new procedures imposed.

This GDPR approach is now on Mark Zuckerberg's timeline, but it is a sponsored endorsement. Facebook would clearly prosper were there more government for its competitors to deal with, and less robust market discipline for itself.

Thomas W. Hazlett is Hugh H. Macaulay Endowed Professor of Economics at Clemson University. His most recent book is The Political Spectrum: The Tumultuous Liberation of Wireless Technology, from Herbert Hoover to the Smart Phone (Yale University Press).