The PTO's Prissy, Puzzling Rules for Registering Trademarks Are Fuct Up

The owner of a clothing line asks the Supreme Court to overturn the ban on "scandalous" trademarks because it violates the First Amendment. 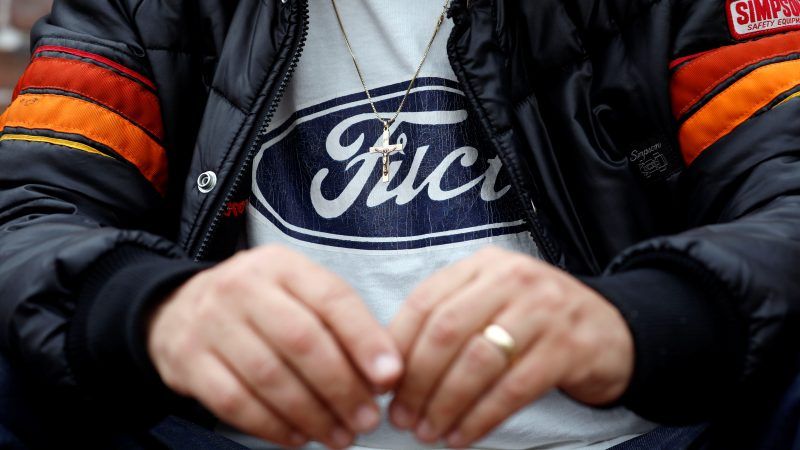 In a First Amendment case the Supreme Court considered this week, the U.S. Patent and Trademark Office (PTO) refused to register Fuct, the name of a clothing line, deeming it "scandalous." Yet the PTO had no such objection to F'd Up, Phat Phuc, FCUK (which has been registered as a trademark eight times), FVCK (registered as part of 11 trademarks), or FWord (although F-Word! somehow was beyond the pale). The PTO's trademark database also includes ass (which has been registered more than 200 times) but not asshole or A-Hole Patrol (both rejected), crap (registered more than 70 times) but not shit, Cum Together (although the PTO rejected another application for the same name), and bitch (registered more than 150 times) but not Kickabitch (rejected). Word Prostitute, Grammar Nazi, Dago Swagg, and Wild Injun met the PTO's standards, but The Christian Prostitute, Coffee Nazi, Dago Mary's, and Urban Injun did not.

"How do you deal with the problem of erratic or inconsistent enforcement, which seems inevitable with a test of the kind you're articulating?" Justice Brett Kavanaugh asked Deputy Solicitor General Malcolm Stewart during oral argument in the case, Iancu v. Brunetti, on Tuesday. Justice Neil Gorsuch was also troubled by the challenge of predicting whether the PTO will agree to register a trademark.

"There are shocking numbers of ones granted and ones refused that do look remarkably similar," Gorsuch said, referring to the appendix from which most of the above examples are drawn. "What's the rational line?…How is a reasonable citizen supposed to know? What notice do they have about how the government's going to treat their mark?"

Stewart did not have a very good answer to these questions, although he assured the justices that the PTO from now on will take a narrow view of the statutory provision authorizing it to reject "scandalous" trademarks, which the U.S. Court of Appeals for the Federal Circuit in 2017 deemed "an unconstitutional restriction of free speech." As the appeals court noted, the PTO historically has asked whether a "substantial composite of the general public" would consider a trademark scandalous, defined as "shocking to the sense of truth, decency, or propriety; disgraceful; offensive; disreputable;…giving offense to the conscience or moral feelings;…or calling out for condemnation." But that test runs afoul of the Supreme Court's 2017 ruling in Matal v. Tam, which rejected a ban on "disparaging" trademarks that had prevented the Asian-American dance rock band The Slants from registering its name.

"Tam has led us to focus more on limiting the scope of those adjectives," Stewart told the Court. "To the extent that the PTO had previously taken into account whether the views expressed were shocking or offensive, that won't be done any longer."

Justice Elena Kagan did not seem reassured by that promise. "You're essentially saying we should uphold this statute on the basis of various commitments that the government is now making to apply this statute to only a small subset of the things that it could apply to if you look at it on its face," she said. "That's a strange thing for us to do, isn't it?…These are very broad words, but we're going to pretend that they say something much narrower than they do?"

While Tam involved discrimination based on viewpoint, Stewart said, the PTO's rejection of Fuct—to which he referred elliptically as "the equivalent of the profane past participle form of a well-known word of profanity"—was "viewpoint-neutral." He argued that Fuct is an example of "marks that are offensive, shocking to a substantial segment of the public because of their mode of expression, independent of any views that they may express."

Erik Brunetti, who owns Fuct, argues that the brand does reflect a viewpoint. "It's edgy," said Chief Justice John Roberts, summarizing Brunetti's position. "It expresses a nonconformist attitude." According to Brunetti's lawyer, John Sommer, "Mr. Brunetti's viewpoint is…I can be offensive; I don't have to obey the authority….The audience that Mr. Brunetti is appealing to is young men who want to be rebels." Roberts called this argument "totally circular," since using whatever words happen to offend the PTO could be said to express that rebellious message, which would mean they would have to be approved as trademarks.

Whether or not the attitude communicated by Fuct counts as a viewpoint, Brunetti's expectation that the name will appeal to the hip young adults he is targeting casts doubt on the judgment that the name qualifies as scandalous. "If you were to take a composite of, say, 20-year-olds," 86-year-old Justice Ruth Bader Ginsburg asked Stewart, "do you think…they would find it shocking?…These goods, as I understand it, are meant to attract a particular market, and if we concentrate on that market, from their perception, the word is mainstream."

The problem, Stewart said, is that exposure to the trademark extends beyond the target market. "The interest is in protecting unwilling viewers from material that they find offensive," he said. But that argument proves too much, since (as the government emphasizes) Brunetti is free to call his clothing line whatever he wants; he just can't get federal protection for his trademark.

"This word and all sorts of other words can be used in connection with the sale of goods," Justice Samuel Alito noted. "They just can't be registered trademarks." Brunetti's customers can walk the streets and malls of America wearing clothing emblazoned with Fuct, albeit without the little R in a circle after the name. Does the absence of that detail make the word less offensive?

Chief Justice Roberts seems to think so. "For parents who are trying to teach their children not to use those kinds of words," he said, "they're going to look at that and say, well, look at that, and then, you know, they're going to see the little trademark thing and say, well, it's registered trademark. Well, they won't say that, but you understand my point." I'm not sure I do.