Quit Worrying and Learn To Love Trade With China

Fretting over deficits and intellectual property will do no good and much harm.

Deirdre McCloskey | From the April 2019 issue 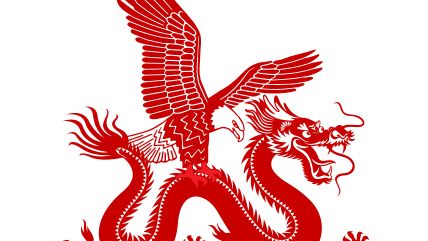 Get ready for the Great Trump-Xi Depression. The White House is pursuing two stupid policies, trying to reduce the United States' "balance of payments" with China and trying to protect "intellectual property" from China's thievery. These policies are leading to a crash in the Chinese economy, which has been grossly ill-managed under President Xi Jinping. International knock-on effects were already apparent last autumn, even as the trade deficit ballooned and Americans benefited from Chinese theft.

"Balance of payments" is a silly way of talking, right from the get-go. Are you concerned about your balance of payments with your grocery store? You give Kroger cash and it gives you goods. Worried? I thought not. After all, you have a balance of payments surplus with your employer, right? Hope so. And your scary-sounding deficit with Kroger is good for you. In exchange for money, the store provides healthy food such as oatmeal, walnuts, olive oil, and blueberries. (Try it: I just lost 30 pounds that way, a good deficit.)

The talk of national balances is silly in itself, because the national balance is the result of individual voluntary deals between Harry in New York and Tatsuro in Tokyo to buy a Toyota, say, or Laura in Bloomington and Chenli in Shanghai to buy a Lenovo. Worrying about the balance of trade caused great pain from so-called "stop-go" macroeconomic policy in Britain and in Holland in the 1950s. Growth was reduced by gormless fretting about national hoards of gold.

And "our" deficit in the international balance of trade with China is not alarming even if there's no offset from other trades, because the overall balance of payments, including IOUs, has to balance. It's just accounting. If you spend more than you earn, someone is giving you a loan. If the U.S. imports computers from China more than it exports soybeans to China, "we" have to provide nice-looking IOUs—for example, engraved portraits of Ben Franklin that cost 12.5 cents each to print. For one of Ben's portraits we get $100 worth of computers. Pretty good, eh?

It's what happened to Japan in the 1970s, the other time we became deeply worried about deficits with East Asian people. (Funny how we never worry if the deficits are with British or Dutch people.) The Japanese then, like the Chinese now, bought assets such as Rockefeller Center, usually dollar-denominated. The assets, like the railways in Kenya and the crazy central Asian railway that China is buying now, turned out to be dogs. Then "we" Americans paid the Japanese back in dollars that had meanwhile depreciated by a third. Wait for it.

Some macroeconomic measuring matters, because we can feel the measures in our lives. When a quarter of the labor force was unemployed in 1933, my grandmother knew it, because she had men at her back door begging for food. When in 1984 inflation in Israel was 500 percent per year, the joke goes, an Israeli astronaut got to the moon, on the price level. (How did he get home? On the Israeli exchange rate.)

Unemployment, inflation, and higher income can all be felt in real life and are therefore worth monitoring. But when did you last feel the U.S. balance of trade? You feel only the idiotic policies advocated in reaction to it by Peter Navarro, a White House economist who never learned economics. (His Ph.D. is from Harvard. I'm thinking of turning mine back in.) It would be better if the government did not calculate and announce the balance of payments at all. It's meaningless and an occasion for sin.

But it should make you suspicious of the notion of turning human knowledge into exclusive property to hear that both the patent on invention and the copyright on writing were invented by Venetians five centuries ago. La Serenissima was notorious for enforcing monopolies. If a glass blower escaped from the island of Murano and went to Paris to teach the French the secrets of the craft, the Doge would send agents to kidnap him and bring him back, to be thrown into the deepest dungeon of the Ducal Palace.

Less colorfully, the economic historian Joel Mokyr has shown that the vaunted British patent system in imitation of the Venetians was in the 18th century so expensive that it was worthless for encouraging innovation. In fact, from about 1780 to 1800, James Watt stopped innovation in steam engines by fiercely protecting his expensive patent. By contrast, Ben Franklin, he of the $100 bill, gave all his innovations to the world patent-free. Good old Ben.

Patents and copyrights make things that are free in nature artificially scarce in order to cream off profit for the influentials. They are comparable to hack medallions, recently threatened by monopoly breakers Uber and Lyft. (Surprise, surprise: Successful Uber and Lyft are now joining the owners of regular taxis to get the government to restrict the numbers of cars charging for rides.) Pointing out that intellectual property is essentially rent seeking at a recent Cato University gathering produced what can only be described as, by the standard of those hallowed precincts, an uproar. People said indignantly, "What about land? Surely we should have property in patents like we have property in land."

But if I use a plot of land, you can't. By contrast, if I use knowledge of a glass-blowing technique or of a separate condenser for a steam engine, you can use it, too. We both can, and consumers get the benefit. The goal of an economy, as Adam Smith taught us, is consumption, not jobs or production.

Once a drug has been invented, the invention has no opportunity cost. The price of the knowledge should be zero. True, somehow the research needs to be funded, as for a bridge. Before the Brooklyn Bridge was constructed, the resources used to construct it had other uses and therefore a social cost. But from May 23, 1883, letting another person walk across cost nothing, and so the crosser should be charged nothing. It's an economic dilemma with no snappy solution. The economist Steve Horwitz points out that a cooked hamburger also has no opportunity cost and should by this logic sell for zero. Economists would be satisfied with a rough-and-ready rule of, say, a 10-year monopoly. But asserting an expansive right to intellectual property, which Congress then regularly extends in order to preserve the privileges of drug companies and the Walt Disney Corporation, is no solution.