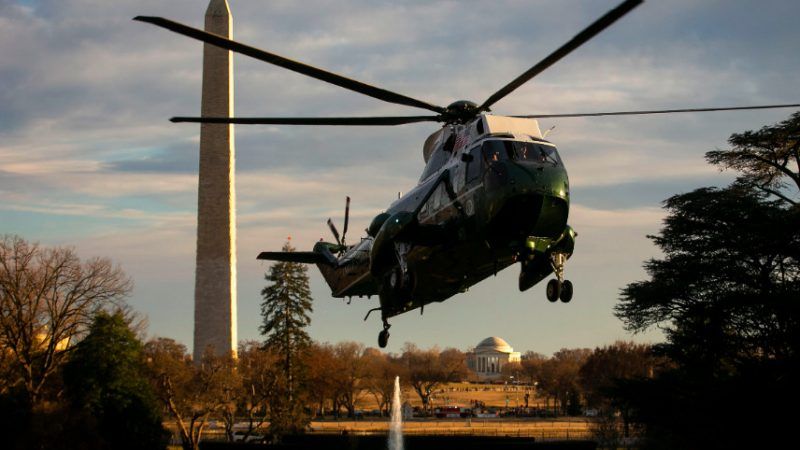 Who needs words to have meanings? Not our government, that's for sure these days. In an interview released Tuesday, President Donald Trump said his administration was "seriously" considering designating drug dealers "as terrorist organizations."

What makes someone selling drugs into a terrorist? That's an easy one: they come from south of the U.S. border.

Trump told Breitbart News: "We're thinking about doing it very seriously," the it being a designation that "Mexican drug cartels" are terrorist groups. "In fact, we've been thinking about it for a long time. … As terrorists—as terrorist organizations, the answer is yes. They are."

A great example of Mangu-Ward's Law: All legal provisions created in the name of national security will eventually be used to prosecute the war on drugs https://t.co/jwUolvfo40

No one wants to stick up for violent mobsters, which is what many Mexican drug-peddling associations surely are. But the trouble with designations like these—those based on membership in some law-enforcement designated category, like a "gang" or a "terrorist organization"—is that they tend to just escalate penalties and public sentiment against anyone possessing drugs while Latino, or part of whatever the demonized identity du jour is. It encourages "criminal justice" that runs on guilt by association. It gives drug warriors an excuse to keep up their hardline tactics under the guise of fighting a new threat. And it provides cover to all sorts of bullshit prohibitionist policies and anti-immigration crusades, as well.

Republicans in Congress have introduced a bill similar to what Trump is proposing. The measure would make it so not just those deemed cartel members would be included but anyone who assisted anyone accused of cartel membership.

So it's the war on terror, war on drugs, and war on immigration all rolled into one! I'm sure if they put their minds to it, they can wrap "sex traffickers" and "satanists" and Russian bots in there, too.

No more capital punishment in California. Per an executive order from California Gov. Gavin Newsom, the state will suspend all death penalty sentences going forward and grant reprieves to the 737 prisoners currently facing execution.

"I do not believe that a civilized society can claim to be a leader in the world as long as its government continues to sanction the premeditated and discriminatory execution of its people," said Newsom in a statement. "The death penalty is inconsistent with our bedrock values and strikes at the very heart of what it means to be a Californian."

Things are "about to get real interesting," Stormy Daniels told an audience at The Wing co-working space in Washington on Tuesday. Daniels has parted ways with showboating attorney Michael Avenatti after a federal judge dismissed her lawsuit seeking to void a non-disclosure agreement she signed regarding the money paid to her by Michael Cohen on Trump's behalf. Her new lawyer is Clark Brewster.

An earlier suit against Trump for defamation was dismissed last fall. Since then, however, "it's been proven that I didn't lie," said Daniels, referring to revelations made by Cohen in his congressional testimony this year. "I think we're gonna try that one again."

Daniels also said she was proud of Cohen for his recent testimony. "He's tired of being bullied. He's tired of being called a liar and called a rat and, whatever, you know. Part of me was, like, 'Wow, he sounds really sincere.' I'm so proud of him for doing the right thing."

As for Avenatti—who tweeted Tuesday that he had terminated their business relationship—Daniels said she had been seeking a new lawyer already and he was just trying to get ahead of that. Their goals were not really aligned to begin with, Daniels explained. She wanted the non-disclosure agreement invalidated so she didn't have to pay a massive $20 million fine for breaking it. But for Avenatti, it was all about finding a way to bring down the president. "That was his agenda," she said.

Laws should not advantage particular political parties or discriminate against candidates who choose not to affiliate with a party. The Ballot Fairness Act (#HR1681) helps equalize the treatment of candidates so elections will be fairer and voters will have more options. pic.twitter.com/XrlvRwp3mb

• American Civil Liberties Union lawyers say a man's suit to punish his former girlfriend for having an abortion will not get far.

• Boing Boing warns about the "rise of the surveillance scooters."

• How America is making the drug war worse in Southeast Asia.