David Leyonhjelm Reps Libertarianism Down Under

Scott Shackford | From the April 2019 issue 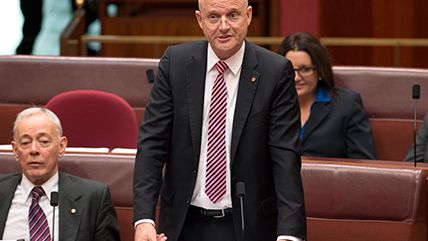 The first senator from Australia's libertarian party, David Leyonhjelm, announced in January that he's resigning from national politics, but he isn't leaving government behind. Instead, he plans to take his fight against the nanny state to the local level.

Leyonhjelm, of Australia's Liberal Democratic Party (the Aussie answer to America's Libertarian Party), was elected to office in 2013 and re-elected in 2016. He spent much of his tenure advocating the right to own guns, marry someone of the same sex, legally smoke marijuana, and be free from unwarranted government surveillance.

After four years of persistent activism at Australia's federal level, Leyonhjelm says "we've definitely gone backwards." A big reason for his disappointment is his country's embrace of American-style tech snooping. But his frustrations don't end there: Even after the Australian Senate made it easier for terminally ill patients to import medical marijuana, the Department of Health continued to threaten people who attempted to do so.

As he explained to Reason's Scott Shackford in January, Leyonhjelm is leaving the Senate to run for state-level office, where he hopes the odds are better for accomplishing freedom-advancing reforms as a lawmaker in New South Wales' Legislative Council.

Q: In 2014, you talked about the need to introduce Australians to libertarian philosophy. How do you think that went?

A: I think it's safe to say that the word libertarian is now not unfamiliar to a lot of Australians. I don't get asked, "What does that mean?" Or if I use the word, it's no longer assumed to be libertine. Those who are a little bit politically inclined now understand it, broadly stated. Although there's quite a lot of people who are prepared to ascribe to it qualities that don't exist.

Q: What do you see as victories during your time in the Senate?

A: We have a subsidy for child care. The stated policy is to get parents to go back to work—mothers in particular. Until I got involved, it was open-ended. You could basically earn an income of $20 million a year and still receive the subsidy for care for your children. I forced the government to limit it to a household income of $350,000. It's pretty obscene that people earning that much money receive a taxpayer subsidy.

Q: What prompted you to seek a state-level office rather than running for re-election for a federal office?

A: Mostly because the issues that I am fundamentally concerned about are state issues, and it's state governments that are largely responsible for them. So I'd like to be in a position where I can do something about e-cigarettes, gambling, late-night lockouts [i.e., laws that require bars to turn patrons away after certain hours], cannabis, motorbikes, fishing, four-wheel driving, firearms, speed limits, bicycle helmets. It is a very long list.

Q: Since you took office, do you think the average Australian citizen has more or less individual freedom?

A: Less. The issues on which I have fought long and hard are mostly the national security stuff, and I've lost every one of those battles. I've achieved some reform for the media so that journalists don't get prosecuted for just doing their job, but the bottom line is that in supposedly controlling terrorism, we've lost multiple freedoms.

Q: Do you think Australian lawmakers understand the implications of what they're doing with new encryption and surveillance laws?

A: I don't think they have any idea of what they've gotten into. When a law allowing government to access metadata was being introduced, George Brandis, Australia's attorney general at the time, was asked by the media, "What is metadata?" He did not have a clue.

Q: When you came into office, you wanted to push for a vote on same-sex marriage, which passed in 2017. How did that play out?

A: I tried to recharacterize it as a libertarian issue rather than as a left-wing issue—that the government has no business telling you who you can and cannot marry. To some extent, I succeeded in establishing that argument. One senator from the Liberal Party from New South Wales is conservative and gay, and he was very much opposed to same-sex marriage. When I started pushing the libertarian argument that it really wasn't a left-wing issue, he came to the realization that getting the government out of private lives was a good thing. And he then became quite influential in how same-sex marriage was achieved. It was actually his private bill which was ultimately passed.