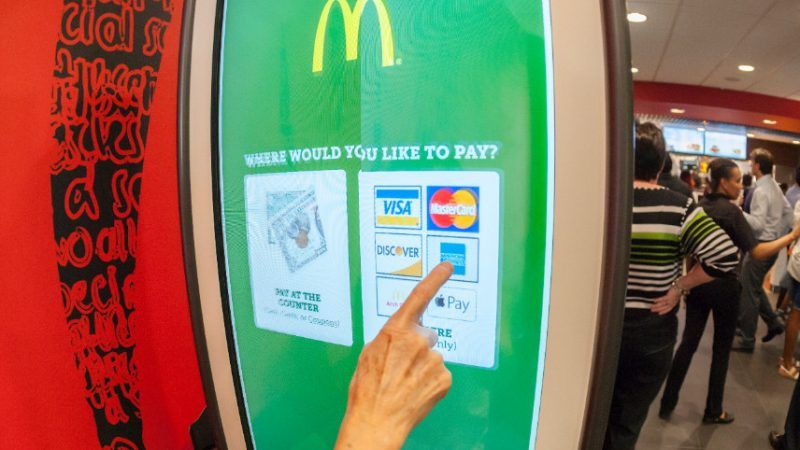 In recent weeks, Illinois mandated a huge increase in the state minimum wage, Pennsylvania's governor proposed to double his state's minimum wage, and New Mexico lawmakers moved forward with a plan to raise the minimum wage there, too. Hiking the cost of labor is a popular cause once again—even among people who've demonstrated in the past that they know perfectly well this is a recipe for limiting opportunity and trapping people in poverty.

It's tempting to say that people are actually getting stupider about economics. But maybe, instead, it's all part of a conspiracy by robots who are poised to be the big beneficiaries of an artificially crippled job market.

"Raising the minimum wage by a substantial amount would price working poor people out of the job market," wisely editorialized The New York Times. "It would increase employers' incentives to evade the law, expanding the underground economy. More important, it would increase unemployment: Raise the legal minimum price of labor above the productivity of the least skilled workers and fewer will be hired."

That's as important an insight now as it was when it was written in 1987. Unfortunately, since then the Gray Lady's editorial board has had its economic savvy surgically removed and replaced by a fuzzy wad of good intentions.

"A recent study on Seattle's $15-an-hour minimum wage law reignited the debate over whether higher minimums help workers by lifting pay or harm them by leading employers to cut hours. The study, by University of Washington researchers, found more harm than good," the Times acknowledged in 2017. Then the editorial board went on to insist, "what is not acceptable is to do nothing in the face of uncertainty. Minimum wages have to go up."

So much for the laws of economics, which haven't changed in the last 30 years. We'll just hand-wave them away because … they're mean or something.

If the laws of economic haven't changed, technology has—in ways that make artificial hikes in the price of labor even more damaging. Robots are ever-more available to take over when people become too expensive.

"To curtail rising labor costs, businesses are investing in automation that can replace 'low-skilled' workers, high school educated or less," warned payroll and human resources company ADP last year in an article acknowledging the new popularity of boosts in the minimum wage. "Automation has already taken hold in grocery stores with self-checkout lines and fast food restaurants with touchscreen order entry kiosks. We see it with smart ATMs and the robots installed in manufacturing plants."

The ADP article points to grocery stores, with a high percentage of low-wage workers and low profit margins (2.2 percent in 2017) as especially ripe for automation. If you've used a self-check aisle at a grocery store in recent years, you know that the process is well under way. But it's not just that one industry.

"Increasing the minimum wage decreases significantly the share of automatable employment held by low-skilled workers, and increases the likelihood that low-skilled workers in automatable jobs become nonemployed or employed in worse jobs," Grace Lordan of the London School of Economics and David Neumark of the University of California, Irvine, reported in a paper published last year in Labour Economics. They drew their conclusions after reviewing data from 1980 through 2015.

"These effects are relatively larger for individuals employed in manufacturing, and are larger for the oldest and youngest workers, for females and for blacks," they add.

To some extent, the researchers found, higher-skilled workers benefit from automation because of the need for somebody to run and maintain machinery. But that doesn't help new workers trying to break into the job market, or established workers who don't have the skills to justify the higher price mandated by law for their labor.

As The New York Times noted in wiser days: "Raise the legal minimum price of labor above the productivity of the least skilled workers and fewer will be hired."

From a tech standpoint, this opens up intriguing possibilities. A few years ago, Momentum Machines was a buzzy startup leveraging the movement to boost minimum wages by promising to replace wage-earners with burger-flipping robots. Now, under the name Creator, the company has opened a high-profile demonstrator restaurant that does just that, with hamburgers cooked and served, untouched by human hands. A few actual people take orders on iPhones and keep the automated burger line stocked with supplies.

That even some of those remaining humans can be replaced is obvious to anybody who has ordered drinks or paid their tab through a Ziosk or similar tabletop tablet at a casual dining restaurant. "The biggest fear is that eventually the Ziosk will take over the job entirely," NPR reported in 2015.

Well, yes. If lawmakers keep pricing humans out of the job market relative to ever-more-innovative and automated alternatives, I expect that tabletop terminals and robotic line chefs will replace the biological competition at the low-skilled end of the job market. Maybe they'll be kept company by a well-paid live technician or two, but certainly not by anybody who has little more to offer than their muscles (but who could become more valuable and harder to replace if given time to learn in lower-paid work).

Will minimum wage advocates relearn the errors of their ways and come to recognize, once again, that a flexible and dynamic job market is a healthy job market—for humans? I wouldn't count on it.

In New York, where the $15 minimum wage is an accomplished fact, "advocates for low-wage workers" now push for more rules on scheduling and dismissing fast food workers. That would, it goes without saying, make hiring those workers more expensive.

If I was a robot, or if I manufactured them, I'd root for those "advocates" to succeed.