When it Comes To Debt, Politicians and Academics Are All Like, 'What, Me Worry?'

From OMB head Mick Mulvaney to former Treasury Secretary Larry Summers, nobody cares about spending money we don't have on things we don't need. Big mistake. 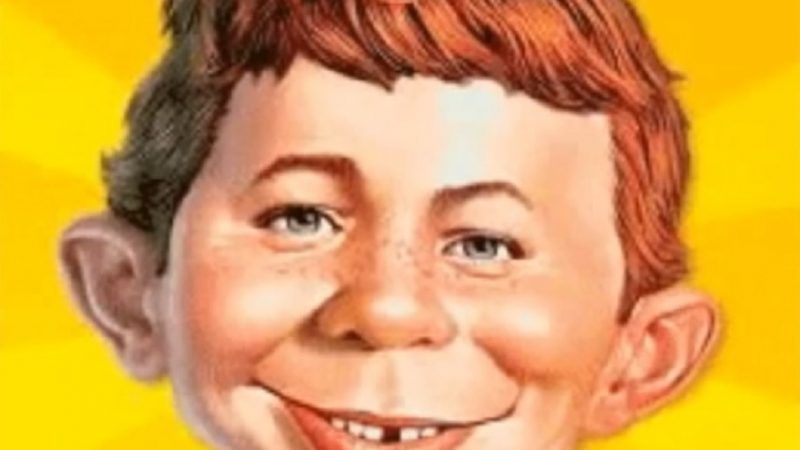 Over at The Washington Post, Robert J. Samuelson has a terrific new column that helps to explain why our leaders don't give a rat's ass about the ballooning national debt: Deep down, they know that you can't keep borrowing forever and ever. But more importantly, "what both Democrats and Republicans actually fear are the highly unpopular steps—spending cuts or tax increases—they might have to take to reduce or eliminate [annual] deficits, which are huge."

Along the way Samuelson coins a new axiom:

Call it Neuman's Law after Alfred E. Neuman of Mad magazine fame, whose philosophy is, "What, me worry?" Neuman's Law postulates that there is never a good time to raise taxes or cut federal spending. This explains why, since 1961, the annual federal budget has been in deficit 52 times and in surplus only five times (1969 and 1998-2001). Unsurprisingly, all the surpluses occurred at the end of economic booms that automatically raised tax revenue and curtailed spending.

He also points to a stunningly bad article in Foreign Affairs written by two Harvard economists, former Treasury Secretary Larry Summers and former Obama economic adviser Jason Furman. Summers and Furman unconvincingly wave away concerns about growing national debt and the return of trillion-dollar deficits. Interest rates are low, they say, and all that borrowed money is helping to keep the economy afloat. Yet even they admit that "sooner or later, government spending has to be paid for."

But until then, Summers and Furman typify the "What, me worry?" mindset because tomorrow is always a day away. As does Donald Trump's chief of staff and budget director, Mick Mulvaney, who recently said that "nobody cares" about deficits and debt.

Trump told supporters 40-50% of speech will be about foreign policy. When asked if the deficit will be mentioned in #SOTU speech, chief of staff Mulvaney said "nobody cares," per attendee https://t.co/YeBTSdF3HX

Samuelson quickly points out why deficits and debt do matter. As even the most Keynesian-minded economist will tell you, borrowed money needs to be paid back, and that means higher taxes, spending cuts, inflation, or some combination of all three. We're already seeing a bump up in interest rates and just the vig on the debt will comprise 13 percent of all federal outlays by 2028 (it already accounts for around 6 percent). "If escalating debt raises interest rates," Samuelson writes, "it could crowd out private investment, undermining the economy's long-term growth potential. Or some sort of financial crisis might occur if investors become sated with U.S. Treasury bonds."

There's another reason to be worried about massive, ongoing debt. Both right-wing and left-wing economists agree that "debt overhangs" correlate strongly with depressed rates of growth.

In a 2012 paper, economists Carmen Reinhart and Kenneth Rogoff define a "debt overhang" as a situation in which the debt-to-GDP ratio exceeds 90 percent for five or more consecutive years. After looking at 26 debt overhangs in 22 advanced economies since 1800, they conclude that "on average, debt levels above 90 percent are associated with growth that is 1.2 percent lower than in other periods (2.3 percent versus 3.5 percent)." These overhangs last a long time—in their sample, the average lasted 23 years—creating a cumulative loss in economic growth that's "nearly a quarter below that predicted by the trend in lower-debt periods."

That work has been validated by left-wing economists associated with the University of Massachusetts, who were critiquing an earlier version of Rinehart and Rogoff's work that had mistakenly found that debt overhangs reduced growth below zero. The critics conclude that "the average real GDP growth rate for countries carrying a public-debt-to-GDP ratio of over 90 percent is actually 2.2 percent.

Taking a full point off of annual economic growth and compounding it over a quarter century is the difference between a rip-roaring economy and rising standards of living, and what we've been witnessing for most this century: Massive anxiety and a cramped, crabby politics that's all about securing a piece of a shrinking pie.

In the 21st century, "Debt Denialism" is a bipartisan malady, which makes it that much harder to combat. Recall back in 2004, Dick Cheney, a veteran of the hapless Ford administration, uttered the phrase, "Reagan proved that deficits don't matter," which both Republicans and Democrats have fully taken to heart. Until the effect of persistent debt on the economy gets taken seriously, we can expect to have sub-par growth and all the problems that go along with that. "What, me worry?" is a gag line from a humor magazine, not the basis of budgetary policy.

Related: "Why We Need Less Debt, and Fast!"