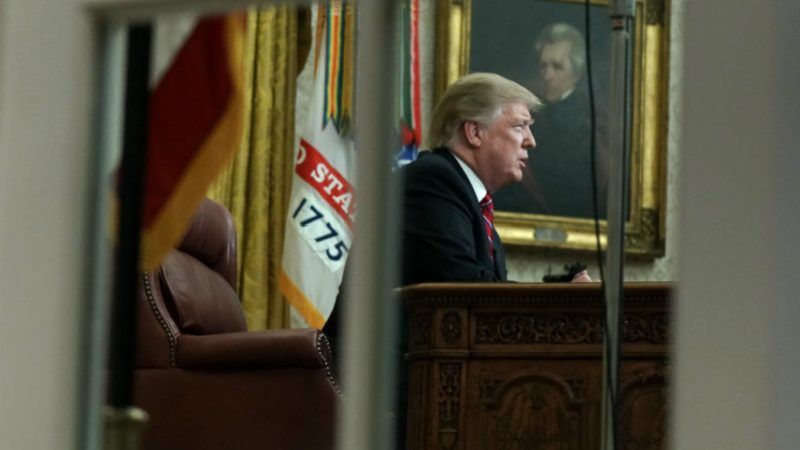 Perhaps the most bizarre part of last night's widely televised presidential address is how surface-normal it all seemed. Sure, President Donald Trump spouted off a dizzying array of incorrect statistics and outright lies about illegal immigration and the situation on America's southern border. But he failed to let loose any of the fascist-leaning orders many were predicting after his administration started throwing the words "national emergency" around.

I am surprised at how relieved I am that nothing real actually happened in Trump's address tonight. Apparently I was actually worried.

Have to build up those political cynicism calluses a bit more.

And he delivered much of it in a rote, flat affect that induced an Uncanny Valley effect. There was no name-calling, no stream-of-consciousness. No glimmer in his eye to go with the demagoguery on all the bad things border-crossers do. A number of outlets are reporting that Trump really didn't want to do the speech.

"Watching Trump's flat delivery of sentiments that he can't possibly believe was the inverse of comforting," writes Alyssa Rosenberg at The Washington Post. "Instead, the address had the queasy effect of a serial killer's mask in a horror movie: It was a failed attempt to look normal that concealed something even more terrifying underneath."

(While we're on the topic of Post columns, you should definitely read Alexandra Petri's all-subtext version of Trump's address.)

This strange spectacle was blessedly brief and, unbelievably, followed by an even less credible attempt at coming across like human beings from House Speaker Nancy Pelosi (D–Calif.) and Senate Minority Leader Chuck Schumer (D–N.Y.). Or, as Petri put it: "The Democrats responded, in a long hallway, looking like something out of 'The Shining,' that the Government Shutdown Belongs In the President's Lap."

At least that one lent itself to some good memes.