When the Bubble Bursts, We're So Screwed

All we have to show for 9 years of economic expansion is record amounts of debt, and all long-term fiscal problems ignored. 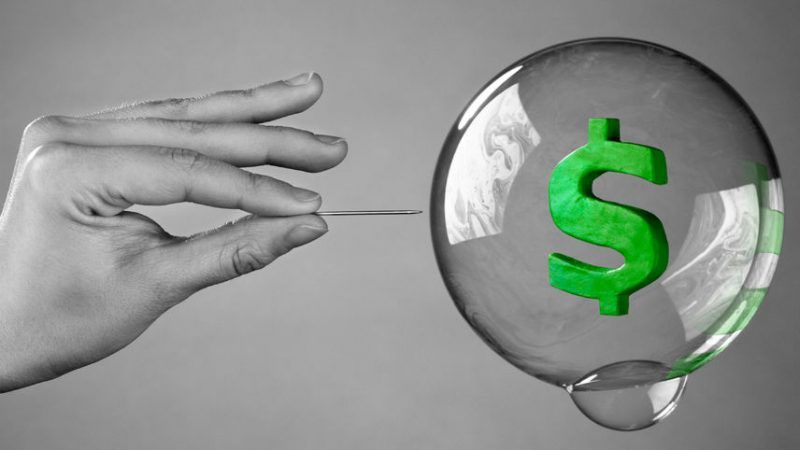 "If something cannot go on forever," the economist Herbert Stein famously wrote, "it will stop."

Stein's Law, as that dictum and its variations have come to be known, originally referred to ever-widening budget deficits, though quickly expanded to include phenomena such as economic booms. We may soon watch the rule assert itself on both counts.

You need not search hard for trend lines that are reaching the near-forever stage. The equities markets, even after last week's bloodbath, are still in the midst of the longest bull run (defined as avoiding a 20% drop from peak) since World War II. There have been 12 economic expansions in the U.S. during that time; 11 were shorter than our current 111 months, as calculated by the National Bureau for Economic Research. If growth lasts until next summer, we'll break that record, too.

And did we put our houses in order after all that growth? Nope! "Consumer debt is at an all-time high," reports American Banker, adding cheerfully: "The crisis did not teach us a lesson about the perils of borrowing too much." Personal savings are down. And during the just-ended fiscal year, the federal government also ran its largest budget deficit in six years.

There are housing bubbles, auto bubbles, tech micro-bubbles, art bubbles. Banksy shredded his own just-sold $1.4-million painting, and now it's said to be worth even more.

The trade war with China really kicks in after Jan. 1. The Grim Reaper is all warmed up in the bullpen, waiting for the opening riff from "Welcome to the Jungle."

Yet some enthusiasts claim the sky is perfectly clear of storm clouds. Asked Sunday on Fox News whether there were any sign of concern, National Economic Council Director Larry Kudlow said, "not at the present time," adding, "The economy is in terrific shape. We are in an economic boom. People thought it would be impossible. The reality is we are clicking on all cylinders. They are absolutely crushing it, profits are rising, confidence is up, blue-collars are up, wages are up."

Bulls are right until the moment they're wrong, and so far during the Trump presidency they have a far better track record than the bears. But what happens when the music finally stops?

Not only are individual Americans unprepared for this eventuality, being leveraged with historical amounts of debt, their governments at all levels are in even worse shape. Recessions dampen tax receipts while spiking demand for state services. But instead of using the economic expansion to prepare for that rainy day, politicians have blown record-size holes in their budgets.

Consider that just as we enter this new era of higher interest rates the annual federal deficit is set to once again cross $1 trillion — yes, the same threshold that drove so many tea partiers nuts (and rightly so) back in 2009-2013. Debt service is the fastest growing major item in the federal budget, estimated at $390 billion for next year, and expected to close in on the $1-trillion mark within a decade.

As Rep. Thomas Massie (R-Ky.), one of only a handful of federal legislators remotely serious about fiscal issues, recently tweeted, "the federal government spent 10 times as much money paying interest on the debt … as it did on all roads and bridges. … The debt isn't just a burden for our kids and grandkids, it's a burden for us!"

Think of how much our politics have changed since the last long economic expansion (1991-2001). Back then, when there were nominal budget surpluses, Democratic presidential nominee Al Gore wanted to put those savings in a "lock box" in order to shore up Social Security in advance of the long-awaited stress test of the baby boom generation retiring. George W. Bush preferred tax cuts, but also made a bid for Social Security reform, which would fizzle on the launch pad of his second term.

Every year between 1997 and 2013, the president, whether Democratic or Republican, mentioned in his State of the Union address the need to reform old-age social programs before demographics render them unsustainable. No more.

Donald Trump rose to power by repudiating the entitlement-reform agenda of House Speaker Paul D. Ryan (R-Wis.), who has been subsequently chased out of politics. Democrats now campaign on expanding, not reforming, Medicare.

Sadly for juveniles of all stripes, problems do not disappear just because you no longer mention them. The Congressional Budget Office, whose sobering predictions made constant headlines in the Obama years back when Republicans pretended to care about fiscal responsibility, predicts that the Social Security trust fund will run out of money in 2031, after which recipients are required by law to receive an across-the-board 25% benefit cut.

On the state level, public-sector pension promises are already straining budgets to the breaking point from Sacramento to Syracuse. You think those problems will get any better when the next recession hits? Last time around a Democratic president with majorities in the House and Senate showered hundreds of billions to bail out misgoverned states. Now close your eyes and imagine President Trump doing the same.

The zero-sum battle over government resources is brutal enough with unemployment near all-time lows. Though it feels almost cruel to say so, if you think politics are ugly now, just wait until the return of Stein's Law.