We didn't get another Anita Hill hearing. Let's consider that a small silver lining. 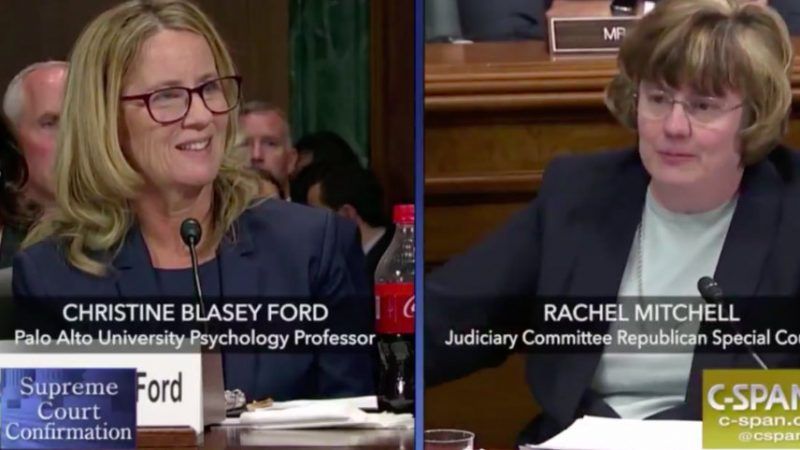 If anything is more clear after today's Senate testimony from Christine Blasey Ford, who has accused Supreme Court nominee Brett Kavanaugh of sexual assault, it's that Republicans are using this to lay the groundwork for future attacks against Democratic leaders, and not against Ford.

All of the Republicans on the Senate Judiciary Committee ceded their questioning time to Phoenix-area prosecutor Rachel Mitchell. And Mitchell's most thorough lines of questioning centered not on Brett Kavanaugh's alleged attack on Ford in high school nor the events immediately surrounding it but on how involved liberal leaders and lawyers were in the process of her coming forward.

It's not a bad strategy. To go tough on a woman recounting an assault on national television would play badly with audiences far beyond the #BelieveAllWomen crowd. And while that may be cynical way to look at it, the outcome was nonetheless a positive one: Mitchell refrained from repeating some of the worst sins of previous political forays of this sort. We didn't get another Anita Hill hearing. Let's consider that a small silver lining.

But what did we get? The way the questioning was set up—five minutes from the conservative side, five minutes from the liberal side, repeat—turned into a series of grandstanding speeches from Democrats like Sens. Cory Booker and Kamala Harris interspersed with meticulous and detailed questions from Mitchell about just how Ford had decided to come forward, when, and what happened since.

Who suggested she take a polygraph? (Her lawyers.) Who paid for it? (Her lawyers.) Who was paying for her lawyers? (They're working for free.) Did she tell Sen. Dianne Feinstein or any other Senate Democrats to make her name public? (No.) Does she know who leaked her letter? (No.) Why didn't she choose to have the committee come to her in California? (She didn't know that was a possibility.) Why didn't her lawyers tell her it was? (She couldn't say.)

Though Mitchell made no explicit arguments, her whole process today seemed designed to elicit support for an argument that Democrats and their pet lawyers had manipulated the Supreme Court confirmation process for their own political gain. After the hearing, Republican lawmakers made it explicit. "All I can say is that we are 40-something days away from the elections and their goal, not Mrs. Ford's goal, is to delay this past the midterms so they can win the Senate and never allow Trump to fill this seat," Sen. Lindsay Graham told reporters.

Mitchell's questions also helped prop up the right-story/wrong-guy theory (as previously, and clumsily, advanced last week by Republican strategist Ed Whelan and fleshed out today with two men coming forward to say it was them, not Kavanaugh, who had assaulted Ford).

That's also politically smart: Republicans can now at least nominally claim belief in Ford as a victim—and explain why so many people are finding and describing her as credible—without conceding that Kavanaugh did it.

Democrats attempted to head this off at the hearing. "How are you so sure that it was [Kavanaugh]?" Feinstein asked Ford at one point.

"The same way that I'm sure that I'm talking to you right now, basic memory functions," Ford replied.

"So what you are telling us is this could not be a case of mistaken identity?" asked Feinstein. Ford replied, "Absolutely not."

But that didn't stop Republicans like Graham from perpetuating the mistaken identity theory afterward. "I don't doubt that something happened to her," Graham told reporters. And again: "Something happened, I don't know what." Then he suggested it might be a good idea if Ford go "talk to someone" about her issues.

The hearing itself ended on Mitchell doing her own patronizing grandstanding, about the proper and "trauma-informed" way to interview victims. Seeming sympathetic to Ford's plight, she waxed on about how the process today had been far from ideal ("Would you believe me if I told you that there's no study that says this setting, in 5-minute increments, is the best way to do [trauma-informed interviews]?") and that a closed session in Ford's home state of California would have been more appropriate. Ford seemed grateful for the olive branch. She laughed. She agreed.

Mitchell continued: "Did you know that the best way to do it is to have a trained interviewer talk to you one-on-one in a private setting and let you do the talking?" Ford said it made "a lot of sense."

Then Mitchell had a follow up: "Did anybody ever advise you, from Sen. Feinstein's office, or Rep. Eshoo's office, to go get a forensic interview?" Ford said no. "Instead," asked Mitchell, "you were advised to get an attorney, and take a polygraph?" Ford said many people advised her to get an attorney, and the attorney recommended the polygraph. Mitchell finished up:

And instead of submitting to an interview in California, we're having a hearing today in 5-minute increments, is that right?

Whether this was meant as a knock on Ford and/or her lawyers, the implication was clearly that Senate Republicans weren't to blame for the day's frustrations.