Bloomberg and Trump Share a Love of Stop and Frisk

Both New York billionaires overestimate the program's effectiveness and overlook its constitutional defects. 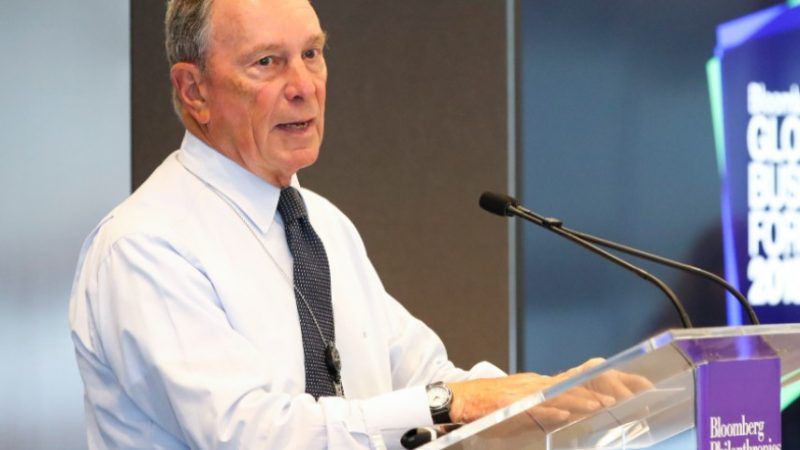 Michael Bloomberg is once again threatening to run for president, this time as a Democrat. In the unlikely event that he seeks and wins the nomination, he will face off against a fellow New York billionaire who enthusiastically agrees with him about one of the most contentious law enforcement issues of the last two decades.

Like Bloomberg, Donald Trump credits the police strategy officially known as "stop, question, and frisk" (SQF) with the historic decline in crime New York has seen since the 1990s. Both men think that success justified the program and recommends it to other cities. They are wrong on both counts.

Bloomberg, who served three consecutive terms as New York's mayor, presided over a sevenfold surge in SQF encounters, which peaked at 686,000 in 2011. Crime rates fell substantially during that period, trends that Trump and Bloomberg attribute to SQF.

"I would do stop and frisk," Trump said during his presidential campaign. "I think you have to. We did it in New York. It worked incredibly well."

In an interview with The New York Times last week, Bloomberg treated the relationship between SQF and reduced crime as self-evident. "I think people, the voters, want low crime," he said. "They don't want kids to kill each other."

On closer inspection, the numbers do not tell the story Trump and Bloomberg think they do. Property and violent crime rates—which peaked in 1988 and 1990, respectively—were already falling before SQF, and there is no clear relationship between the number of stops and the rate of decline.

SQF stops, which were controversial partly because they overwhelmingly targeted blacks and Latinos, fell precipitously after 2011. By the time SQF opponent Bill de Blasio took office as mayor in 2014, the number of stops had fallen by 93 percent, and it fell another 76 percent during his first term, dropping below 11,000 last year.

SQF supporters were sure the program's demise would lead to a surge in crime. "No question about it," Bloomberg's police commissioner, Ray Kelly, said in 2013. "Violent crime will go up."

Rapes and felonious assaults did rise slightly between 2011 and 2017 (by 2 percent and 8.5 percent, respectively). But robberies fell by 29 percent and homicides by 43 percent, reaching their lowest level since World War II. That homicides continued to drop while the number of street stops plummeted belies Bloomberg's claim that SQF was necessary to stops "kids" from killing each other.

The NYPD's track record suggests it frequently violated those rules. At the peak of SQF, nine out of 10 stops resulted in no arrest or summons. Most stops included pat-downs, which almost never turned up guns and failed to discover weapons of any kind 98 percent of the time.

It's not hard to see why U.S. District Judge Shira Scheindlin concluded in 2013 that New York's SQF program violated the Fourth Amendment. Bloomberg himself conceded that point, probably without realizing it.

Defending SQF during a 2012 radio interview, Bloomberg said the aim was not arresting criminals or taking weapons off the street but deterring young men from carrying guns. To his mind, the tiny and declining percentage of stops that yielded guns showed the program was working.

Whatever you may think of that argument, it does not count as a constitutional justification. With the narrow exception of sobriety checkpoints, the Supreme Court has clearly stated that police may not stop people at random in the hope of detecting or deterring crime.

Bloomberg's casual disregard for the Fourth Amendment shows that supposedly sensible centrists are happy to join fearmongering conservatives in sacrificing civil liberties on the altar of public safety.