The Justice Department's opposition to such harm-reducing programs is irrational, unscientific, and inhumane. 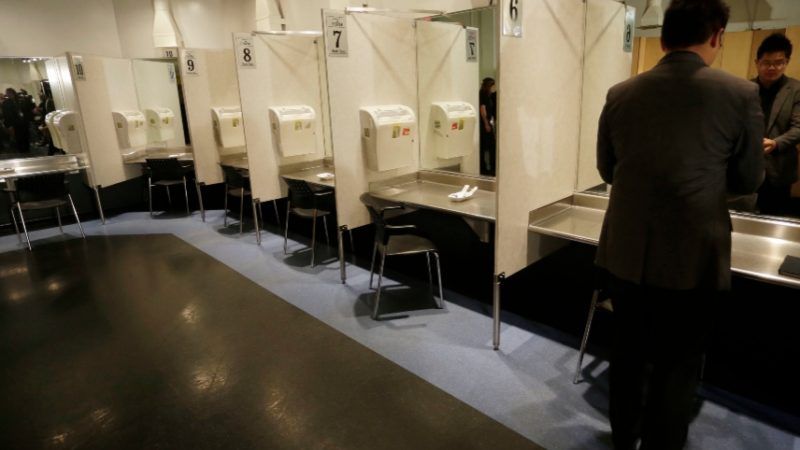 Last week California's legislature approved a bill that would authorize "overdose prevention programs" in San Francisco where people can inject their own drugs in a safe, sanitary, and supervised environment. The next day, Deputy Attorney General Rod Rosenstein published a New York Times op-ed piece in which he promised "swift and aggressive action" against such programs.

The fight over supervised injection facilities (SIFs), which operate legally in 66 cities around the world but are prohibited in the United States, is the latest round of a long-running debate. On one side are advocates of "harm reduction," who seek to save lives by making drug use less dangerous; on the other are hard-line prohibitionists like Rosenstein, who seek to deter drug use by keeping it as dangerous as possible.

In the 1990s, needle exchange programs, which reduce the spread of blood-borne diseases such as AIDS and hepatitis C by making clean syringes more readily available, were just as controversial as SIFs are today. Two decades later, they are not only legally tolerated but federally subsidized, and even social conservatives such as Vice President Mike Pence have come to recognize their lifesaving value.

Naloxone, an opioid antagonist that reverses overdoses, posed a similar challenge to drug warriors. In 2016 Maine Gov. Paul LePage, a Republican, vetoed a bill allowing pharmacists to dispense naloxone without a prescription, saying he did not want to create "a sense of normalcy and security around heroin use that serves only to perpetuate the cycle of addiction." But Maine legislators overrode LePage's veto, and wide distribution of naloxone has become a consensus policy endorsed by the Trump administration.

SIFs combine syringe exchange and naloxone kits in a space where drug users needn't worry about overdosing with no one around to help or about being arrested, assaulted, or robbed. Survey data suggest that environment encourages more cautious dosing and safer injection practices.

Rosenstein claims SIFs "would only make the opioid crisis worse." Yet research has found that SIFs help prevent fatal overdoses, control the spread of HIV and hepatitis C, reduce skin and soft tissue infections, and encourage enrollment in drug treatment.

A 2010 study estimated that Insite, a Vancouver SIF that opened in 2003, saves five times as much money as it costs. According to a 2016 cost-benefit analysis, a SIF in San Francisco would save $2.33 for every dollar spent on it. A 2017 summary by the Penn Wharton Public Policy Initiative concluded that "the effectiveness of SIFs is clear," which helps explain why the American Medical Association supports their legalization.

Rosentein says "injection sites destroy the surrounding community," citing the account of a Redmond, Washington, city council member who visited Vancouver. Yet as the Penn Wharton summary notes, "Studies have found that the opening of Insite in Vancouver led to no visible effect on drug trafficking, assaults, or robbery," and research in Australia "found similar results."

Studies of Insite indicate that SIFs reduce public injection and drug-related litter such as used syringes. In a survey of drug users at an underground American SIF, more than 90 percent "reported that, if not for the site, they would have been injecting in a public restroom, street, park, or parking lot."

Rosenstein also complains that local governments plan to "subsidize" SIFs, which he describes as "taxpayer-sponsored haven[s]" for drug users. But SIFs need not involve any public expenditure.

The SIFs under consideration in New York City, for instance, would be funded and run by nonprofit organizations. With that sort of arrangement, government's role is limited to getting out of the way.

Rosenstein cites the so-called crackhouse statute, which makes it a felony, punishable by up to 20 years in prison, large fines, and property forfeiture, to "maintain any place…for the purpose of…using any controlled substance." But the Justice Department has wide discretion in deciding how to allocate its resources, and shutting down SIFs should not be a high priority for federal prosecutors who sincerely want to reduce the harm caused by drug use.