Federal Prosecutors Love Snitches; Trump Thinks They Should Get Stitches

"Flipping" should probably be illegal, Trump says. It's one of federal prosecutors' most beloved tactics, and their go-to argument for mandatory minimums. 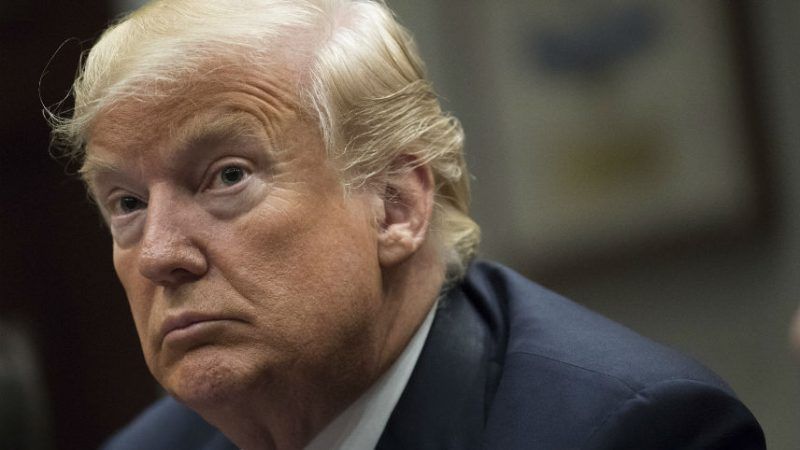 President Trump, angered by the betrayal of his onetime attorney Michael Cohen, suggested this morning that it should be illegal for criminal defendants to cooperate with prosecutors in exchange for a lighter sentence.

"It's called 'flipping,' and it almost ought to be illegal," Trump said on Fox & Friends.

"I know all about flipping. For 30, 40 years I have been watching flippers," Trump continued. "But if you can say something bad about Donald Trump and you will go down to two years or three years, which is the deal he made, in all fairness to him, most people are going to do that. And I have seen it many times. I have had many friends involved in this stuff."

The Justice Department declined to comment on Trump's statements, but leaning on defendants to snitch in exchange for a reduced sentence is one of federal prosecutors' most beloved and time-honored tactics.

In fact, one of federal law enforcement's favorite arguments against reducing mandatory minimum sentences, or giving judges more leeway to depart from them, or even making some sentencing changes retroactive, is that doing so will reduce defendants' incentive to cooperate with prosecutors.

Every time Congress has considered federal sentencing reform over the past decade, law enforcement groups have lined up to warn that, without the hammer of lengthy mandatory minimum sentences, they won't be able to pressure low-level members of criminal organizations to flip.

For example, in 2014, legislators introduced a bill that would have made 2010 reductions to the 100:1 sentencing disparity between crack and powder cocaine apply retroactively, shortening the sentences of thousands of federal inmates who were convicted and sentenced before the passage of the Fair Sentencing Act in 2010. The National Association of Assistant U.S. Attorneys (NAAUSA) howled that "slashing minimum mandatory penalties will threaten the prosecution of many of the most dangerous and high level criminals involved in drug trafficking by undermining the cooperation incentive that the current sentencing structure creates."

But data shows that there was no such drop in cooperation when Congress reduced mandatory minimum sentences for crack cocaine offenses.

"Rates of crack cocaine offenders cooperating with law enforcement have not changed despite changes in penalties," a 2015 report by the U.S. Sentencing Commission found. "The rate of sentences that were below the guideline due to a government substantial assistance motion remained stable throughout the 2005-2013 period, indicating that the reductions in penalties during this period did not generally reduce the willingness of offenders to provide assistance to the government in the prosecution of others."

Like most of Trump's critical opinions of the criminal justice system, this one appears rooted in animus and confusion. The president is discovering in real time the immense power and leverage that prosecutors wield—far too much for Michael Cohen, a man with the loyalty and ethics of a hungry coyote, to resist.

Beyond disliking snitches, though, there are many real and substantive concerns about how the feds coerce plea deals and cooperation from defendants. Ninety-seven percent of all prosecutions at the federal level end in plea deals, often because defendants, facing the real possibility of decades in prison if they go to trial and lose—probably represented by an underfunded and overworked public defender—take a deal. Criminal justice reform advocates call it "the trial penalty."

There is also the phenomenon of jailhouse snitches and cooperating witnesses who lie, sometimes without disclosing to the court that they were promised leniency or other perks in exchange for testifying.

As former federal prosecutor, sometimes Reason contributor, and Popehat blogger Ken White wrote in a series of tweets this morning, there are several changes that could lead to more balance in the criminal justice system, such as increasing funding for public defenders, strengthening penalties for prosecutors who flout their obligations to disclose evidence to the defense, and recording law enforcement interviews.