The Republican senator questions the record of the SCOTUS nominee. 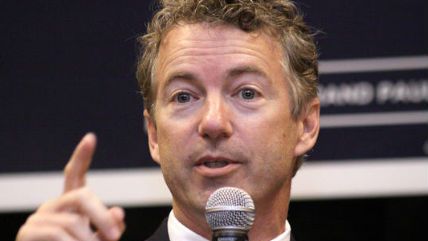 "I am honestly undecided. I am very concerned about his position on privacy and the Fourth Amendment." Those are the words of Sen. Rand Paul (R-Ky.), speaking to Politico last week about whether or not he will vote to confirm Judge Brett Kavanaugh to a seat on the U.S. Supreme Court. With the Senate currently divided almost equally along party lines, Paul's vote on the Kavanaugh nomination could prove decisive.

"Kavanaugh's position is basically that national security trumps privacy," Paul observed. "He said it very strongly and explicitly. And that worries me."

Paul has reason to be worried. In 2015, Judge Kavanaugh argued that the federal government's wholesale warrantless collection of every Americans' telephone record metadata does not violate the Constitution. "In my view," Kavanaugh wrote, "the Government's metadata collection program is entirely consistent with the Fourth Amendment."

Furthermore, Kavanaugh continued, "even if the bulk collection of telephony metadata constitutes a search," the program is still permissible because the Fourth Amendment "bars only unreasonable searches and seizures. And the Government's metadata collection program," he asserted, "readily counts as reasonable" because it "serves a critically important special need—preventing terrorist attacks on the United States." He concluded: "That critical national security need outweighs the impact on privacy occasioned by this program."

Such views would seem to put Kavanaugh directly at odds with Paul, who has made a name for himself in the Senate as a prominent voice in favor of broad Fourth Amendment protections.

During his 2013 filibuster over domestic drone strikes, for instance, Paul faulted the Bush administration for "wiretap[ping] phones without a warrant." Paul then applauded President Obama for saying that "we should have warrants before we tap people's phones and that we shouldn't be trolling through people's records."

Two years later, when he filibustered against the reauthorization of the Patriot Act, Paul doubled down on his Fourth Amendment advocacy while sharply criticizing warrantless government surveillance and bulk metadata collection.

"Is the standard to be if you have nothing to hide, you have nothing to fear but that everything should be exposed to the government, that all of your records can be collected?" Paul asked. His answer: "The bulk collection of all Americans' phone records all of the time is a direct violation of the Fourth Amendment." Paul was referring to the very same government program that Kavanaugh described as "entirely consistent with the Fourth Amendment."

To be sure, it is possible that Kavanaugh has changed his mind about the underlying constitutional issues and now regrets writing that opinion. If so, that would be a welcome development. The members of the Senate Judiciary Committee should press him during his confirmation hearings to further explain his views on this crucial legal matter.

The future of the Fourth Amendment is one of the most significant issues facing the Supreme Court. Given his judicial record in this area, Brett Kavanaugh has given Rand Paul and other critics cause for concern.