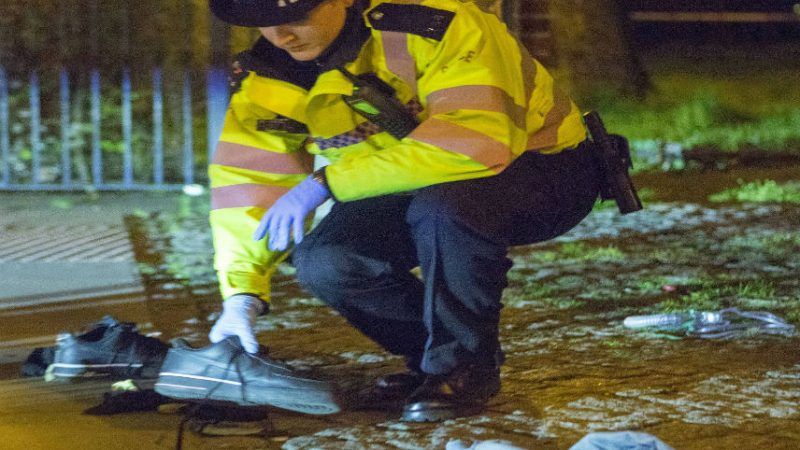 London saw more murders in February and March than New York City (37 vs. 32), for apparently the first time. This has led to calls for both heavier policing and social media censorship. London's murder number total for 2018 so far is now over 53 (vs. 130 total in 2017), with at least 35 from stabbing, and its murder rate over the past three years has gone up nearly 40 percent.

The comparison between London and New York might be less about London becoming more of a hellhole and more about New York City becoming amazingly less of one. In 1990 that American city had 2,245 murders, and as the Financial Times reports, "In the 20 years to 2009, the number of murders, robberies and burglaries in New York was down 80 per cent, twice the US national average, and lower than it had been in 1961." While London has more and more relied on racially unbalanced stop-and-frisk searches to futilely cope with crime, New York has found that curtailing those practices, has not, despite law-and-order fears, led to increasing crime.

London Mayor Sadiq Khan has sent 300 more police on the streets this month and threatened all knife-wielders, whether they've assaulted anyone or not, with "the full force of the law." (For all the good it has done them, London has banned carrying a knife in public without "good reason" for years already.) For many Londoners, carrying a knife in a dangerous city is an understandable matter of self-defense. But too often, the government doesn't consider your own self-defense a good reason to allow you to innocently carry a tool, both in London and in American debates over the right to carry a gun.

Some in London believe that a stronger public health/social services approach to curbing violent crime (which some claim helped cut Glasgow's murder rate in half from 2005 to 2015) might work where more policing might not, and some blame a national-level lowering in police funding and staffing for the rising murder numbers. But the relation between policing efforts and British crime is by no means clear-cut. According to The Guardian, a leaked report on policing and crime from the U.K.'s Home Office

Writing before the launch of her strategy to counter violence, [Home Secretary Amber] Rudd said in a Sunday Telegraph article: "While I understand that police are facing emerging threats and new pressures—leading us to increase total investment in policing—the evidence does not bear out claims that resources are to blame for rising violence.

While simplistic blame for London's murder problem is also aimed at social media in general and the rise of "UK drill" hip-hop in particular, one important lesson here is old and applies across the globe: Whatever weapons are or are not available, or legal, or used to harm others (acid attacks are also on the rise in London), keeping a desired commodity like drugs illegal and crammed into a black market with no legal recourse for conflict resolution is a terrible idea for domestic tranquility; and no amount of legal anathemas on mere tools, whether knives or guns or acid, is sufficient (or necessary) to reduce crime.