Past-month cannabis consumption by 12-to-17-year-olds is down by more than 20 percent since 2002. 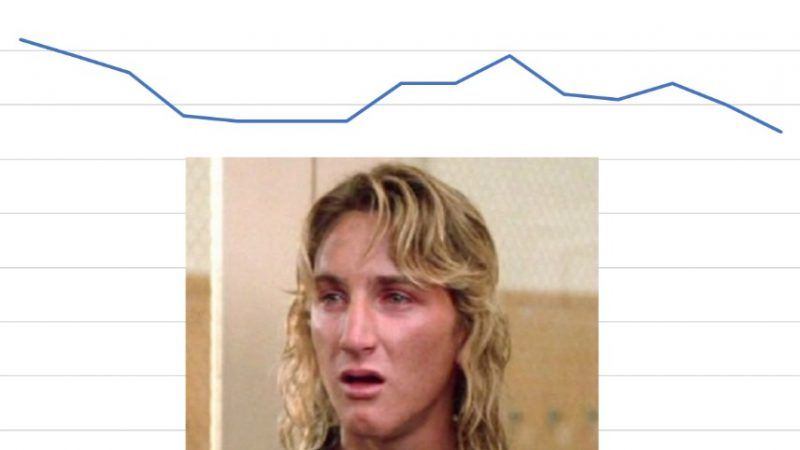 Survey data released today indicate that teenagers were less likely to smoke pot last year than at any point since 2002, despite the message supposedly sent by the relaxation of marijuana laws during that period.

In the 2016 National Survey on Drug Use and Health (NSDUH), 6.5 percent of 12-to-17-year-olds reported using marijuana during the previous month, down from 8.2 percent in 2002. That 21-percent decline occurred during a period when 20 states and the District of Columbia legalized marijuana for medical use and eight states legalized it for recreational use. Adolescent cannabis consumption is even down since 2014, when state-licensed marijuana shops began serving recreational customers in Colorado and Washington. So far Attorney General Jeff Sessions' fear that legalization would make cannabis more appealing to teenagers has not been borne out.

By contrast, past-month marijuana use has been rising more or less steadily among 18-to-25-year-olds since 2006 and among adults 26 or older since 2011. Last year about 21 percent of the younger group and 7 percent of the older group reported past-month use. There is some evidence that marijuana is substituting for alcohol, since past-month drinking is down 8 percent among 18-to-25-year-olds since 2006 and 3 percent among Americans 26 or older since 2014.

"Critics of legalization worry about the message being sent to youth by marijuana policy reform efforts, but the real message is that marijuana should only be used by responsible adults, and it seems to be sinking in," says Morgan Fox, senior communications manager at the Marijuana Policy Project. "Regulating marijuana for adults reinforces that message and creates effective mechanisms for making it more difficult for teens to obtain marijuana. Marijuana is objectively less harmful than alcohol, and regulation gives adults the legal option to choose the safer substance."