The state will continue to pursue money-laundering charges against Carl Ferrer, Michael Lacey, and James Larkin. 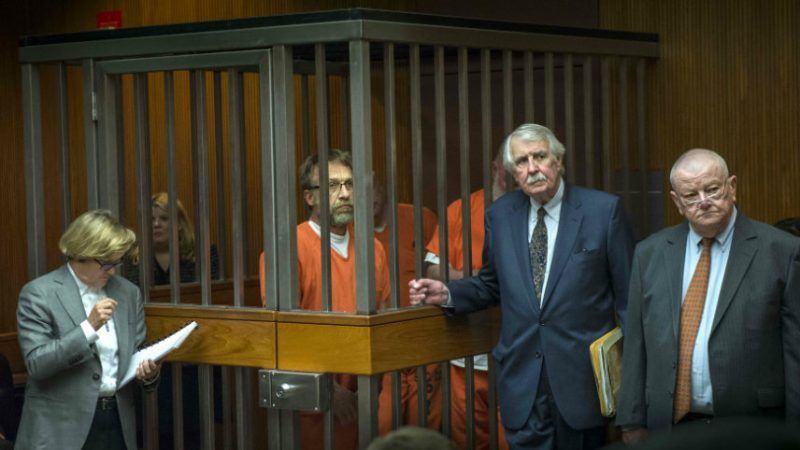 But the men are still being prosecuted on money laundering charges, for profiting from online classified-ads authorities allege to facilitate prostitution.

The charges were brought in December by former California Attorney General (AG) Kamala Harris, now a U.S. senator, after the first case Harris brought against Backpage was rejected. Rather than appeal, Harris amended the charges slightly and filed them in another court.

Judge Lawrence G. Brown notes in an August 23 decision that Backpage leaders are now "being charged with, essentially, either investing money into [an] underlying criminal scheme, or conducting transaction with profits from the scheme." To make their case, state prosecutors (now under the leadership of AG Xavier Becerra) will have to show specific Backpage profits came solely from underlying criminal activity—in this case, the alleged facilitation of prostitution and sex trafficking.

"Regardless of whether [California prosecutors] will succeed in meeting their burden of proof, the theory and the charges under which they are proceeding appear to be valid under California law and adequately pled such that any defect does not bar prosecution," Brown wrote, acknowledging the state's criminal complaint was "not a model of clarity."

State prosecutors had argued that Backpage executives derived an income from prostitution—i.e., pimping—by accepting money for online "Escort" advertisements that resulted in prostitution occurring. Backpage ownership argued it accepted payment for legitimate services—i.e., running a publishing platform—and is not liable for any criminal activity that may have resulted from Escort ads (a null section as of January 2017).

With regard to the pimping charges, "the relevant question…is whether, and to what extent, Defendants' activity entitles them to protection of their First Amendment rights through the immunity provision" of the federal Communications Decency Act (CDA), Brown notes.

"Providing a forum for online publishing is a recognized legal purpose that is generally provided immunity under the CDA," he points out. "This immunity has been extended by the courts to apply to functions traditionally associated with publishing decisions, such as accepting payment for services and editing."

The state also argued (using the same arguments that failed the last time) that Backpage's actions went beyond publishing into content creation, which would mean CDA immunity could be revoked. But "in light of the People's acknowledgment that Backpage's edits would not change the user's intent, there can be no material contribution to the offensive content," writes Brown.

"Indeed, such actions generally fall within the scope of protected editorial functions," the decision continues.

Even if the edits or posting rules allow advertisers to use coded language, this is insufficient to render the website operator a content provider. The crucial distinction is between engaging in actions (traditional to publishers) that are necessary to the display of unwelcome and actionable content, and responsibility for what makes the displayed content illegal or actionable. … Here, it is the third-party who is responsible for the illegal content of the advertisement.

In dismissing the pimping charges against Backpage executives, Judge Brown brings up several interesting historical cases related to the definition of pimping which are instructive to this case. In the first, from 1913, a California court held that "a legitimate defense to pimping is that a prostitute supplied defendant money for any purpose other than being supported or maintained by the prostitution" (People v. Reitzke).

In 2006, a California court held that a "natural reading of the pimping statute does not apply to an individual who provides a legitimate professional service to a prostitute even if paid with proceeds earned from prostitution," as in such a case "the service provider derives support from his own services" (Allen v. Stratton).

And in the 2011 case People v. Grant, a state appellate court said it was important in pimping cases to distinguish between money derived directly from prostitution and money paid by a sex worker for goods or services rendered. "The statutory prohibition [on deriving support from someone else selling sexual services] does not preclude a person from accepting a known prostitute's funds gained from the prostitute's lawful activities or for purposes other than the [alleged pimp's] support and maintenance."

The money laundering case against Backpage hangs on the state's assertion that Backpage created additional websites (EvilEmpire.com and BigCity.com) for the purpose of tricking payment processors and credit card companies into doing business with them. Backpage alleges that these websites, which syndicated Backpage content, were merely meant to draw more traffic to Backpage.com.

Most of the major credit-card companies were accepted on Backpage.com, meaning these companies already agreed, explicitly, to do business with the website's parent company, Backpage LLC. They only dropped out when threatened—illegally—by Illinois Sheriff Tom Dart. It's odd, to say the least, to suggest that Backpage executives would have needed "trickery" to get merchant accounts with these companies considering none of the payment processors or credit-card companies made any such complaint.

"Essentially, either Defendants did—or did not—materially represent to credit payment processors in a scheme to fraudulently obtain money from banks," writes Brown. "If Defendants did so, this may form the basis for a money laundering charge."

Will Congress Act—and Why?

As in previous cases, Backpage's immunity is predicated on Section 230 of the CDA, which is currently under fire from a group of U.S. senators (including Harris). The judge refers several times to the fact that Congress could make changes to the CDA. As such, "this ruling has potentially important consequences for the pending bills to amend Section 230," blogs law professor Eric Goldman.

Brown notes "a growing desire to hold online media accountable for their role in disseminating information leading to condemnable acts by third parties." As evidence, he points to a case "seeking to hold Facebook liable for allowing Hamas to use its platform to encourage terrorist attacks" and one "seeking to hold Twitter liable for providing ISIS an account to use for spreading extremist propaganda."

Since Facebook, Twitter, and Backpage all currently enjoy protection under Section 230, however, they are immune to such prosecutors.

"This immunity was provided by Congress," Brown states, and it can only be modified by Congress, "regardless of where Backpage floats on the tide of public opinion."

Lawmakers haven't said much about other sites in their discussions of the need to change Section 230. "Much of the rhetoric about the bills has specifically targeted and called out Backpage–and only Backpage," notes Goldman.

A key assumption for the bills is that Backpage needs to be crushed and existing law isn't getting the job done because of Section 230. As this ruling shows, existing law may in fact be sufficient to crush Backpage irrespective of Section 230. As a result, there is no need–and certainly no urgency–to rush through amendments to Section 230, with potentially major consequences for the entire Internet, while courts are still resolving the matter. (Indeed, that would be true even without this ruling because of the pending grand jury investigation into Backpage in Phoenix that may use the SAVE Act, the anti-Backpage law Congress just enacted in 2015).

However, it's possible that, despite the anti-Backpage rhetoric, the advocates supporting the pending bills aren't really targeting just Backpage but have larger objectives to undermine or eviscerate Section 230.

Goldman said he "expects this ruling will expose the advocates' true agendas."