He can continue pursuing lethal supply-side policies, or he can focus on saving lives through harm reduction. 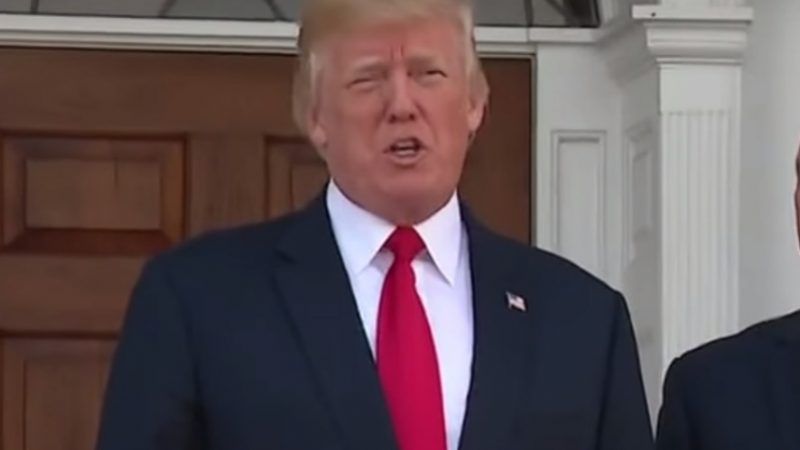 Last week Donald Trump promised to "spend a lot of time, a lot of effort, and a lot of money on the opioid crisis," which he declared a "national emergency." Judging from the president's campaign rhetoric and his comments since taking office, which have focused on building a border wall to "stop the drugs," much of that time, effort, and money will be devoted to erecting barriers between Americans and the intoxicants they want.

That supply-side approach has been failing for more than a century, and it seems doubtful that Trump will be the man to finally make it work. But he may very well succeed in exacerbating the problem he is trying to solve.

To understand how, consider recent trends in opioid use. Since 2010 or so, heroin use has been rising while nonmedical use of narcotic painkillers has been falling.

Many of those new heroin users are former prescription opioid users driven to a black-market alternative by the government's crackdown on painkiller prescriptions. That switch exposed them to much higher risks.

The U.S. Centers for Disease Control and Prevention (CDC) attributed 18,893 deaths to opioid analgesics in 2014. It attributed 10,574 to heroin, which was used by less than a tenth as many people. By that measure, heroin was more than five time as dangerous.

"I used to take just the pills, and then I started doing dope, the heroin, only when I could get it, when it was cheaper," said an opioid user interviewed for a study recently reported in the International Journal of Drug Policy. "But I don't prefer it because you never know what you're getting. It's scary."

In recent years the unpredictable potency of heroin has been magnified by increased adulteration with fentanyl, a synthetic narcotic that is roughly 40 times as potent. "Heroin fluctuation in purity is a known overdose risk," notes another study in the same journal, "and the presence of illicit synthetic opioids contaminating the heroin supply has led to a particularly erratic 'street dope' market that multiplies this risk."

These two developments—novice heroin users accustomed to the reliable doses of prescription opioids, plus greater variability in potency thanks to more use of fentanyl and its analogues—may help explain the strikingly disproportionate increase in heroin-related deaths during the last decade. Between 2007 and 2015, the number of heroin users (as measured by the National Survey on Drug Use and Health) more than doubled, while heroin-related deaths more than quintupled, from about 2,400 to nearly 13,000.

The government has contributed to these deaths in several ways. It created a black market in which drug users do not know what they are getting, encouraged traffickers to move toward increasingly compact and potent products (such as fentanyl), and reduced access to less dangerous alternatives (such as prescription painkillers).

Carrie DeLone, Pennsylvania's former physician general, recently confessed that "we knew that this was going to be an issue, that we were going to push addicts in a direction that was going to be more deadly." Her justification: "You have to start somewhere."

Why not start with policies that might save lives instead of killing people? In addition to lifting restrictions on buprenorphine-based treatment and increasing access to the overdose-reversing opioid antagonist naloxone, the government can shield bystanders from criminal charges when they call for help in response to an overdose, provide honest information about ways to reduce the hazards of drug use (such as not taking opioids in combination with other depressants), promote drug testing services that can alert heroin users to the presence of adulterants such as fentanyl, and tolerate safe injection facilities where people can use drugs in a sanitary environment under medical supervision.

Trump can try to "stop the drugs," which will increase the dangers faced by people who manage to use them anyway. Or he can try to reduce the harm associated with opioid use, including the harm caused by prohibition.