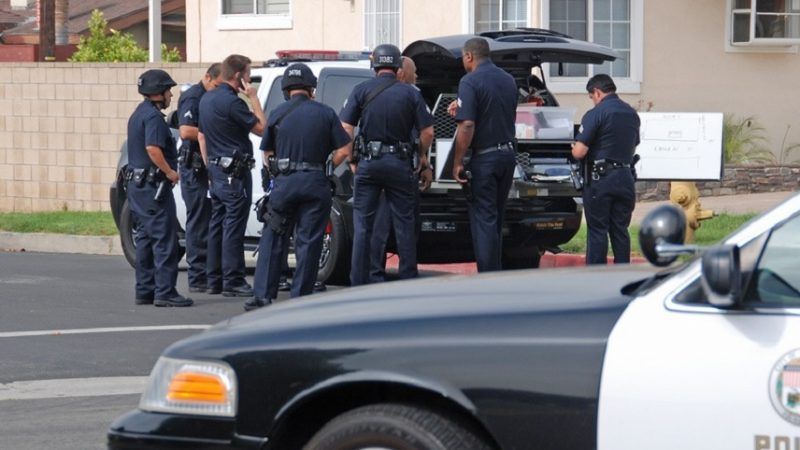 In January, a Baltimore police officer planted drug evidence before activating his body camera and "finding" the probable cause he and his buddies needed to make a bust, according to the city's Office of the Public Defender. Images of the cop placing a soup can full of white capsules on the ground were captured in the 30-second buffer of the camera and then preserved after the device was officially turned on. Now prosecutors are reviewing 100 other cases in which the same trio of officers may have been up to similar shenanigans.

Most news reports are treating the incident as a peek at problems in troubled Baltimore's police department. They need to look a little further afield.

These Baltimore officers, and their colleagues around the country, are the same cops that U.S. Attorney General Jeff Sessions thinks are burdened with excessive oversight. In April he vowed, "this Department of Justice will not sign consent decrees that will cost more lives by handcuffing the police instead of criminals." And just days ago, Sessions rededicated his department to working with local law enforcement on civil asset forfeiture efforts that bypass the need for criminal convictions to seize property—and also bypass state and local safeguards. Forfeited funds are split between federal and local agencies in a lucrative arrangement for everybody but the victims. "Equitable sharing" collaboration between federal and local agencies was suspended under former Attorney General Eric Holder, but the new regime is jump-starting the program

Yes, Sessions promised that "the federal government will not adopt seized property unless the state or local agency involved provides information demonstrating that the seizure was justified by probable cause." But that's cold comfort if the probable cause comes from eager cops planting bags of drugs hither and yon.

The evidence—not planted—suggests that police officers don't need more incentive to falsify reasons for slapping on the cuffs. Day-to-day pressures to meet arrest quotas, out-do colleagues, or spackle over errors in judgment seem to have already done the job in spades.

Michael Slager, a North Charleston, South Carolina, police officer, faced accusations that he'd planted the Taser found near the body of Walter Scott, the man he killed after a traffic stop. Slager claimed Scott wrestled the Taser from him and then brandished it as a weapon. But video showed Slager picking the device up from a good distance away and moving it closer to the dead man's body. After a mistrial in his trial for murder, Slager pleaded guilty to violating Scott's civil rights.

In 2014, two Los Angeles County sheriff's deputies were charged with planting guns at a marijuana dispensary to justify arrests and hefty prosecutions for employees of the business. Further investigation revealed that the two were members of a police gang that described themselves—in a pamphlet—as "alpha dogs who think and act like the wolf, but never become the wolf." They competed among each other for status and seemed to plant guns as a routine tactic.

Across the country, a New York City narcotics detective caught on camera in the act of planting cocaine on four men in a bar told a court that "it was common practice to fabricate drug charges against innocent people to meet arrest quotas." He said he "flaked" the bar patrons to help a buddy who was in danger of missing his target numbers.

The heartland isn't immune, either. Cops in Tulsa, Oklahoma, testified that they planted drugs on suspects up to a dozen times—although they swore that they only did it to people they were absolutely certain were guilty. A police corporal kept a supply of crack cocaine in a tackle box in his car so it was available to be dropped as needed. They also stole cash found during searches, which is sort of like civil asset forfeiture, but with a very streamlined paperwork process.

A handy supply of illegal drugs seems to play a common role in greasing the squeaky mechanism of legal bushwhacking. In Georgia, Murray County Magistrate Bryant Cochran, a sheriff's captain, a deputy, and a friend of the judge all were convicted of, among other things, planting drugs on a woman who complained about Cochran's sexual advances while he was presiding over a case in which she was involved.

Yeah. These folks all need lots more incentive to dig into the tackle box for some of that instant probable cause—and less oversight while they do so, of course. "Every year, police and prosecutors across the United States take hundreds of millions of dollars in cash, cars, homes and other property—regardless of the owners' guilt or innocence," notes the Institute for Justice with regard to civil asset forfeiture of the sort that Jeff Sessions has now revived as a joint federal-local project. Do you think that's enough of a lure for the likes of go-getter cops and crooked judges who haven't shown much restraint about fabricating crimes?

Not that federal oversight is a guarantee of anything. It wasn't so many years ago that legal commentators were trying to calculate just how many thousands of criminal cases the FBI tainted with bogus crime lab results tailored to help prosecutors. In 2014, the Justice Department's Inspector General again reported on "serious irregularities" in the lab's management and cited the execution of a defendant despite a review that found "the FBI Lab analysis to be scientifically unsupportable and the testimony overstated and incorrect."

It's possible that the feds may not be in much of a position to provide moral guidance.

And the latest incident in Baltimore is just one more argument that loosening the reins on law enforcement, and providing the morally flawed officials of the criminal justice system financial incentives to find evidence of crime, is a terrible idea.