Does Donald Trump Have Anything to Do With Constitutional Conservatism?

Mike Lee makes the argument in favor, as he tries to steer the president toward the devolution of power 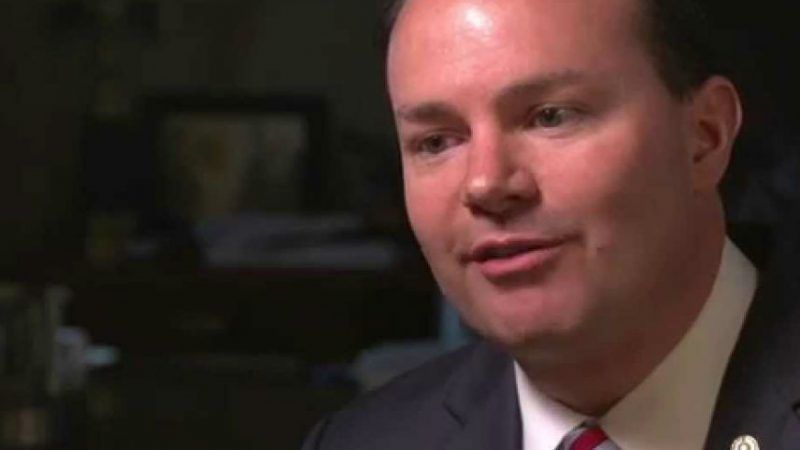 One of the more interesting, depressing, and still-unresolved questions about the Republican Party in the era of Donald Trump is whether the limited-government philosophy that seemed to animate the Tea Party's ascendance in 2009-2010 is still an active thing. (See the bottom of this post for several links which poke at the issue from various angles.) The question has implications for all kinds of policy questions—from the health care debate, where the Senate's Tea Party caucus currently form the hinge-point on which the legislation balances, to forthcoming debates on taxes, budgets, debt ceilings, surveillance, Russian investigations, and more.

Given the wariness with which many libertarians treat the Trump presidency, it came as a surprise for some to read this Politico magazine headline from Tuesday: "Is Trump a Conservative? Mike Lee Says Yes." For instance, Cato Institute Vice President David Boaz in the piece expresses surprise at Lee's assessment:

"It seems to me it's pretty obvious that Trump is not a conservative," Boaz said. He prefers to describe Trump as "a scary authoritarian, nationalist, protectionist cronyist." […]

"One question for intellectual conservatives," Boaz said, "is, 'Have you become such partisans that you've forgotten how to be intellectuals?'"

So how does Lee, a senator who on multiple occasions has expressed revulsion at Trumpism, make the constitutional-conservative case for a president he never endorsed? I asked him that Monday, in a Sirius XM interview tied to the release of his new book, Written Out of History: The Forgotten Founders Who Fought Big Government, in the form of soliciting his response to the theory from libertarian-leaning Rep. Thomas Massie (R-Kentucky) that more than philosophy, Tea Party voters "were voting for the craziest son of a bitch in the race. And Donald Trump won best in class, as we had up until he came along." Lee's response pointed heavily to Trump's record on deregulation:

Look, the fact is that the wave that swept Donald Trump to power was motivated to a significant degree by people who share these principles, by people who are wanting to restore constitutionally limited government. A good part of "draining the swamp" necessarily entailed identifying those areas in which the federal government has overreached, and identifying respects in which we have violated these twin structural protections in the Constitution, the vertical protection we call federalism, and the horizontal protection we call separation of powers.

And so whether we want to call it this or that, whether we acknowledge it as an effort to restore constitutionally limited government or not, that is in fact what it is. And that is in fact going to be what saves our republic from the accumulation of power that's been occurring in Washington over the last 80 years.

More from the interview:

MW: Although with the exception of deregulation?which is a very important exception in this presidency that isn't getting a lot of ink right now just because there's so many other things to talk about?you don't hear a lot of that kind of talk from the president himself. He's not talking a lot about separation of powers, not talking a lot about devolving power, and that kind of thing. Or am I just missing it?

ML: Well, I think it's impossible to extricate federalism from separation of powers. In other words, when he talks about over-regulation, whether he uses these terms or not, he's really referring to the two-step process by which power has been taken from the American people. First it's been taken from them at the state and local level and moved to Washington, and secondly it's been handed over by elected lawmakers to unelected, unaccountable bureaucrats. President Trump recognizes that there's something wrong there, he's trying to restore that balance. And even though he doesn't speak necessarily in those same terms, or quote chapter and verse from constitutional text or from the Federalist Papers, I think he is resonating with the increasingly growing sentiment out there.

Remember: Ten years ago nobody was talking about this stuff. Today the fact that a lot of people do talk about it is a signal that we're making progress in our effort to restore constitutional government.

In the Politico piece, Lee uses what writer Edward-Isaac Dovere characterizes as "tautology" to deal with questions of Trump's qualifications and conservative bonafides. "I think his qualifications occurred by virtue of the process that [the Founding Fathers] themselves set up. That's what qualifies someone to be president," he said in one exchange. "At any given time, when there is a Republican president, typically we regard that person as the leader of the Republican Party," he said in another. "Anyone who's playing a role in the process is, by definition, a leader."

What's that all about? I reckon that like Rand Paul, Lee is not only enthusiastically cheering along the administration's aggressive regulatory reform activity, but also trying to convert ideological aspiration into political reality with the limited hand he's been dealt. This will lead both down paths that libertarians will occasionally find disappointing, but it will also (for the moment anyway) keep two constitutional conservatives in the mix of policy-making on Capitol Hill.

* "Rep. Thomas Massie: 'We don't really have 218 conservatives here [who] meant what they said when they said they wanted to repeal Obamacare'"

* "Having Co-Opted the Tea Party Nationwide, Trump Tries to Stamp out its Remnants in Congress"

* "Mike Lee Gives Three Reasons He's Concerned About Donald Trump, Says He Can List More—Not Something He Couldn't Get Over Though"

* "Does Sarah Palin's Endorsement of Donald Trump Mean the Tea Party Is (or Should Be) Dead?"

* "Did the Trump Party Hijack the Tea Party?"

And here's a July 2014 Nick Gillespie interview with Mike Lee: