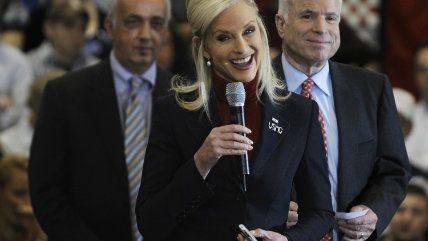 After "aggressively courting" her for the role, President Donald Trump has reportedly nabbed Cindy McCain to serve in his State Department as an ambassador-at-large for human rights. She would almost certainly concentrate on sex trafficking, which has been the main focus of her recent advocacy—and on which she has a track-record of spreading misinformation, promoting policies that make prostitution more dangerous, and partnering with people who use human trafficking as a cover for all sorts of rights-violating behavior. And this is just one of myriad red flags that the beer empress and senator's wife isn't quite as consistent or staunch a humanitarian as she's made out to be.

It turns out the "freedom, democracy, and human rights" institute launched by Cindy and Sen. John McCain is supported by large donations from entities known for persistent rights violations, including Saudi Arabia, a U.S. defense contractor selling smart bombs to the Saudis, and a Moroccan mining company occupying land in Northwest Africa.

As Elizabeth Nolan Brown explains, examining McCain's philanthropic record reveals a long history of personal abuse of nonprofit resources, shady connections, and shoddy work. For years, McCain has been playing the role of crony philanthropist, and now she is poised to bring her dubious advocacy to the highest levels of government.