Sessions uses a straw man to justify a war on medical pot. 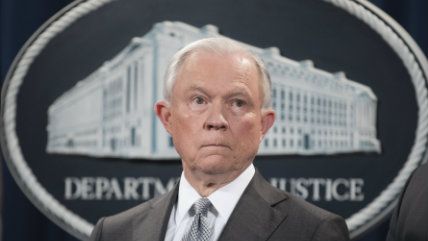 In a previously undisclosed letter sent last month, Attorney General Jeff Sessions asked lawmakers not to renew a rider that blocks the Justice Department from interfering with the implementation of state-level medical marijuana laws.

"I believe it would be unwise for Congress to restrict the discretion of the Department to fund particular prosecutions," Sessions wrote, "particularly in the midst of an historic drug epidemic and potentially long-term uptick in violent crime. The Department must be in a position to use all laws available to combat the transnational drug organizations and dangerous drug traffickers who threaten American lives."

The letter—dated May 1, 2017, and addressed to Sens. Mitch McConnell and Charles Schumer and Reps. Paul Ryan and Nancy Pelosi—was obtained by Massroots.com's Tom Angell. It specifically asks that Congress not renew the Rohrabacher-Farr amendment, passed in 2014. Barack Obama's Justice Department challenged the amendment last year, and it lost in the 9th Circuit Court of Appeals. That means if Sessions wants to go after medical marijuana, he'll need Congress to remove Rohrabacher-Farr from the next appropriations bill.

Congress should tell him to get lost. As the Washington Post's Christopher Ingraham writes, emerging evidence suggest that state-legal medical marijuana reduces the use of opioids. Meanwhile, the one example Sessions cites of traffickers taking advantage of state law actually undermines the idea that his department needs more power.

The case Sessions mentions in his letter involves a group of Colorado residents who allegedly grew pot off the books in order to sell it in states where marijuana is not yet legal. Several members of the alleged conspiracy were able to obtain licenses from the Colorado Marijuana Enforcement Division. Yet they're accused of violating Colorado law, which prohibits the transportation of cannabis products across state lines. This is why Colorado's Marijuana Enforcement Division is working with the Drug Enforcement Administration to investigate the group: Neither agency condones interstate marijuana trafficking.

Sessions seems to think that because several of the alleged conspirators were able to get pot licenses before they allegedly broke state law, the Justice Department needs a blank check to wreak havoc in medical marijuana states. That's one clumsy bait-and-switch.

It's also in keeping with Sessions' ratcheting-up of the federal war on everything. He's instructed federal prosecutors to seek the maximum penalty against non-violent, low level drug offenders; attempted to enlist local police for federal immigration enforcement, and is seeking to erode online privacy protections in the name of freeing modern slaves.