In an interview, the Kentucky senator laments that "there's very little of this attorney general, this Department of Justice, doing anything favorable towards criminal justice or towards civil liberties." 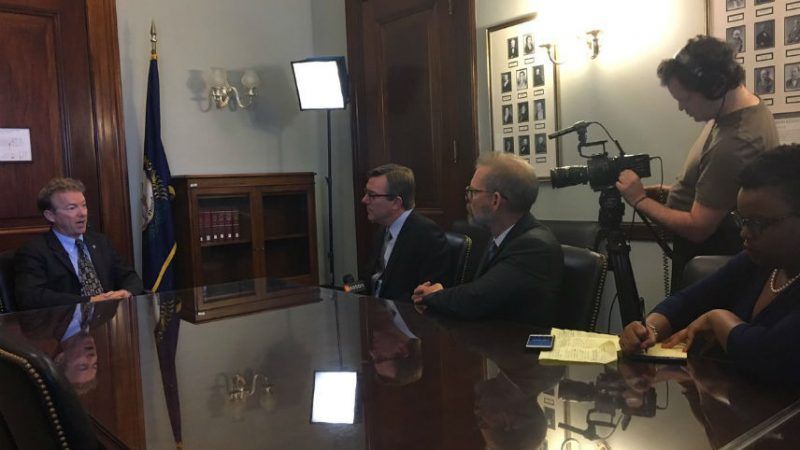 (The office of Rand Paul)

When Rand Paul dropped out of the presidential race in February 2016, the self-described "libertarianish" senator from Kentucky vowed: "I will continue to fight for criminal justice reform, for privacy, and your Fourth Amendment rights. I will continue to champion due process over indefinite detention." On Thursday, amid the hullaballoo of former FBI director James Comey's dramatic testimony on Capitol Hill, Paul brought a handful of libertarian reporters inside his Senate office to discuss his recent work on these projects.

Front and center is a new piece of legislation, introduced this week, to once and for all ban indefinite detention. With the working title of "The Sixth Amendment Preservation Act," Paul's bill "prevents any future military force authorization from being used to justify indefinite detention without trial," according to a summary prepared by his office. More from that:

Section 1021 of the 2012 National Defense Authorization Act unconstitutionally declares that the 2001 Authorization for the Use of Military Force allows our Armed Forces to indefinitely detain citizens, legal residents, and foreign nationals who are alleged to have engaged in hostilities against the United States. This means U.S. citizens apprehended within the boundaries of the U.S. could be held indefinitely without trial.

The Sixth Amendment Preservation Act repeals section 1021 making it clear that no military force resolution can legalize indefinite detention without a trial and seeks to restore our constitutional commitment to individual liberty.

Emphasis in original. "You never know who could be in the White House," Paul explained Thursday. "Could someone be there that would actually take away all of our rights and begin arresting us for who we are, what we are, what we think, what we read? And so I consider this to be one of the most important pieces of legislation that we'll put forward."

Also covered in the discussion: the senator's efforts to vote down the recent blockbuster arms sale to Saudi Arabia ("winning a battle like this would send a huge message out there"), the Trump administration's tough-on-crime posture ("I think there's very little of this attorney general, this Department of Justice, doing anything favorable towards criminal justice or towards civil liberties"), criticism of Paul's vote to confirm Attorney General Jeff Sessions, and his reaction to the Comey hearing, which we teased out yesterday.

Watch an edit of our exchange here: