A win for home chefs 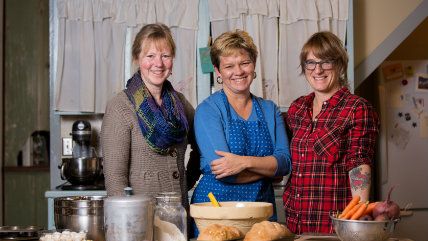 Wisconsin just "became a little freer, and a lot more delicious," as the law firm the Institute for Justice (IJ) put it. On Wednesday, a state circuit court struck down Wisconsin's ban on selling home-baked items such as bread, cookies, cakes, and muffins. The rule has "no real or substantial connection" to consumer protection, Judge Duane Jorgenson wrote in his decision declaring the law unconstitutional.

Wisconsin is one of only two states with such rules (New Jersey is the other), leaving 48 states where homemade baked goods are peddled willy-nilly. No one in these states has suffered serious injury or illness from an improperly-made baked good, Jorgenson noted. The ban was more a matter of cronyism than public health, he suggested, noting the fervor with which groups such as the Wisconsin Bakers Association have rallied against efforts to repeal the law.

Those attempts have twice failed, but Wisconsin lawmakers are at it once again, with a new measure to legalize "the limited face-to-face sale of certain homemade baked and canned foods without a licensing requirement." The bill would allow people to sell "nonhazardous homemade baked goods" face-to-face as long as they make less than $7,500 from the sale of such items, and as long as they register with the state Department of Agriculture, Trade, and Consumer Protection (DATCP). The bill would also extend these rules to canned items, such as pickles.

Under the old law, an individual selling any baked, canned, frozen, or bottled goods must make them in a licensed food-processing plant or commercial kitchen. (Nonprofits get some leeway, and are allowed up to 12 bake sales per year.) This requirement "is enough to shut the door in the faces of many would-be entrepreneurs," explains IJ:

Violating these terms is no joke. As IJ attorney Erica Smith noted last year, "if you sell one cookie at a farmers market, to your neighbor, somewhere in your community, you can go to jail for up to six months or even be fined up to $1,000."

In January 2016, IJ helped three female farmers—Dela Ends, Lisa Kivirist, and Kris Marion—file a lawsuit against DATCP in the Lafayette Circuit Court. The suit alleged that Wisconsin's rule violated the women's due-process and equal-protection rights under the Wisconsin Constitution. Now, a Wisconsin court has agreed.

Will the state let this one go? A spokesman for the state Department of Justice told Wisconsin Public Radio that "in the coming days, we will be evaluating the decision, consulting with our clients about the impact of the ruling, and considering an appeal."

For now, though, the women who brought the lawsuit are reveling in their win—and prepping their kitchens. "I'm excited to get in my kitchen and start baking as finally Wisconsin is truly open for business," says Kivirist, who calls the court's ruling "recognition for all small businesses that we have the right to earn an honest living and will not be stymied because of industry influence."

With the court win, the legislature needn't write an explicit permission slip any longer. But it may now be more motivated than ever to weigh in on homemade food sales: With the previous law struck down, that leaves no sales-volume limit and some confusion over other regulatory requirements.

Should it go with the $7,500 cap, that would give Wisconsin the lowest limit on homemade food sales of any state that permits it, Smith tells me. "We think the legislature can do better than that—$7,500 is pretty low, especially because it's gross, not net profits." While some states cap sales as low as $15,000, others go as high as $50,000.