Could Trump's Deregulation Be a Lifeline for Struggling Entrepreneurs?

If he uses it right, the president's experience with taxes and red tape could benefit workers and small businesses. 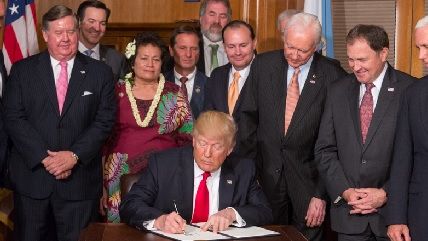 For every new regulation federal agencies propose, they have to "identify at least two existing regulations to be repealed," President Trump ordered just 10 days after taking office. In April, he doubled down, boasting that "we are absolutely destroying these horrible regulations that have been placed on your heads over not eight years, over the last 20 and 25 years," with an emphasis on clearing red tape that discourages banks from lending to businesses and drags out large construction projects. Tax rule complexity that has "effectively increased tax burdens, impeded economic growth, and saddled American businesses with onerous fines, complicated forms, and frustration" was targeted in another executive order weeks later.

The president's "deregulation scheme is yuge for big banks" Salon dutifully sniffed, while a Business Insider columnist snarked that the administration's response to everything is "regulation bad, deregulation good."

Maybe our vocabulary-challenged chief executive has boiled it down that simply, but if so, he's not far from the truth. And if big banks and large businesses benefit, it'll be almost incidental to the relief felt by small businesses and entrepreneurs just trying to get launched and make a buck in an environment that kneecaps their efforts.

"The nation's underground sector has grown to as much as $2 trillion of the nearly $19 trillion economy," a Sage BusinessResearcher report estimated last month. That doesn't include drugs or other criminal activity—it's all off-the-books work that would be legal if licensed and taxed. Many economists believe "working off the books may be the only way many cash-strapped entrepreneurs and home-based businesses get their ideas off the ground."

Why would people feel compelled to work off the books and risk legal penalties? Because taxes and regulations, no matter how prettily they're framed or how "necessary" their advocates consider them, create difficult and expensive hurdles to starting businesses. And the situation is getting worse, crippling the employers of the future—or, often, driving them to operate out of sight of tax collectors and regulators.

Complying with regulations cost businesses an average of $8,086 per employee, the Small Business Administration reported in 2008. But businesses with fewer than 20 employees took the biggest hit at $10,585, vs. $7,454 for firms with 20-499 employees, and $7,755 for large businesses. In the manufacturing sector, which so many people, Trump included, want to cultivate within the nation's borders, the disparity was much worse: $28,316 per employee for small businesses, $13,504 for medium, and $12,586 for large outfits.

In 2012, the National Association of Manufacturers brought in the original SBA report's authors to revisit the topic. They found that regulations now cost each business an average of $9,991 per employee, with $11,724 the average for small businesses, $10,664 for medium businesses, and $9,083 for large ones. The situation further soured in the manufacturing sector, at $34,671 for small outfits, $18,243 for medium ones, and, $13,750 for large companies.

Even allowing for inflation, that's a big jump in costs. Trump threatens "consequences" for companies that move operations outside the United States, but they really would have to be "yuge" to offset the price of staying.

The worst offenders, by the way, are said by small business owners to be the federal tax code and the Affordable Care Act, although there's plenty of pain to go around.

"These worries coupled with significant regulatory costs associated with a business' first year—$83,019—and it's no wonder why we've seen lagging start-up rates in recent years," the NSBA concludes.

But startups don't seem to be lagging among entrepreneurs bypassing tax and regulatory burdens by creating businesses and jobs off the books. That's to the tune, as mentioned earlier, of about $2 trillion of the nearly $19 trillion economy, and as much as 17 percent of the labor force in places like California, according to state government estimates.

So, if high taxes and burdensome regulations drive people to work off the books, what would get them back into the legitimate economy? Think… Think…

"Governments cannot increase tax compliance and decrease the size of the underground economy by ever increasing and more onerous regulations," writes economist Richard W. Rahn of the Institute for Global Economic Growth and the Cato Institute.

"Policy-makers need to adopt a deregulatory approach to startups in some cases to allow this sector to act as an incubator to new business ventures," admits Sheffield University's Colin Williams, who is not generally a fan of a hands-off approach by government.

Basically, government officials have to stop doing the things that drive people to hide from them. And that raises some hope about Trump's seeming enthusiasm for deregulation and tax simplification. Where critics see the potential for crony deals by Trump—and this president in particular as much as government in general clearly sees policy as a means of stroking friends and punishing enemies—there's also the potential for dismantling perverse rules and regulations that cripple economic freedom and growth. That could make it easier and more attractive for businesses and workers to make their livings in the open, with access to legal protections, investment, and peace of mind.

So, keep destroying these horrible regulations, Mr. President. Especially if you're serious about cultivating manufacturing jobs, reducing regulatory burdens is a better idea than punishing companies that understandably flee from them.