Gorsuch Is More Liberal Than Garland

For civil libertarians, the newest Supreme Court justice is better than the nominee who never got a hearing. 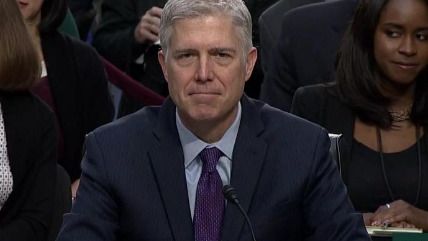 Democrats are understandably bitter about the Republican intransigence that ultimately allowed Neil Gorsuch to take a seat on the U.S. Supreme Court this week. But for Democrats who care about civil liberties, Gorsuch is a better choice than Merrick Garland, the nominee Republican senators refused to consider after he was nominated by President Obama last year.

Garland, who has served on the U.S. Court of Appeals for the D.C. Circuit since 1997, was frequently described as a "moderate" after Obama picked him to replace Justice Antonin Scalia, who died in February 2016. Garland earned that label mainly by siding with the government, sometimes in cases where conservatives liked the result and sometimes in cases where liberals did.

Despite his reputation on the left as an authoritarian, Scalia defended the rights of the accused more consistently than some of his purportedly more liberal colleagues. And as SCOTUSBlog publisher Tom Goldstein noted, Garland is "to the right of Scalia on criminal justice issues."

Gorsuch, who served for a decade on the U.S. Court of Appeals for the 10th Circuit, seems closer to Scalia in this area. Like Scalia, he is a critic of vague criminal statutes and a stickler when it comes to requiring that prosecutors prove all the elements of an offense.

Both tendencies were apparent in a 2015 case involving merchants charged with violating the Controlled Substance Analogue Enforcement Act by selling "incense" containing a synthetic cannabinoid. Even without delving into the "vagueness concerns" raised by the Analogue Act, Gorsuch said, it was clear the defendants had been improperly convicted because the jury instructions "effectively relieve[d] the government of proving each essential element specified by Congress."

Gorsuch's concern about the proper application of criminal statutes was also apparent when he dissented from a 2016 decision in which the 10th Circuit upheld the arrest of a New Mexico seventh-grader who burped up a storm during P.E. class, to the amusement of his peers and the annoyance of his gym teacher. According to the New Mexico Court of Appeals, Gorsuch pointed out, the law under which the boy was charged, which makes "interfering with the educational process" a misdemeanor, "does not criminalize 'noise[s] or diversion[s]' that merely 'disturb the peace or good order' of individual classes."

Another 2016 dissent shows that Gorsuch shares Scalia's respect for the zone of privacy protected by the Fourth Amendment. When the 10th Circuit said it was constitutional for police to ignore multiple "No Trespassing" signs on the property of a suspected drug dealer, Gorsuch criticized his colleagues for endorsing "an irrevocable right to enter a home's curtilage to conduct a knock and talk."

Although progressives may be willing to concede that Gorsuch is preferable to Garland on criminal justice, they tend to view another contrast between the two judges with alarm. Gorsuch is more inclined than Garland (or Scalia) to question the authority of administrative agencies.

While Goldstein found that Garland has "strong views favoring deference to agency decisionmakers," Gorsuch is a prominent critic of the Chevron doctrine, which gives agencies wide authority to resolve ambiguities in the laws they are charged with enforcing. Gorsuch sees excessive deference to executive-branch agencies as a threat to the separation of powers.

It is also a threat to individual freedom. Giving one agency the power to interpret and rewrite the law as well as enforce it poses a clear threat to people at the agency's mercy, including the obscure and vulnerable as well as the rich and powerful—a point that progressives who view Chevron as an essential bulwark of the regulatory state have trouble recognizing.

Prior to Gorsuch's confirmation, People for the American Way cited a 2016 decision as evidence that he would undermine the ability of regulators to "enforce critical laws, safeguard essential protections, and ensure the safety of the American people." The group neglected to mention that Gorsuch's opinion sided with an unauthorized immigrant fighting to remain in the United States.