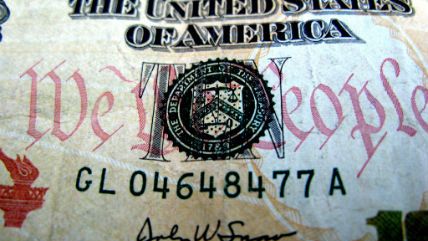 The Federal Reserve announced today it will be raising its federal funds interest rate target (the rate banks charge each other for overnight loans) by a quarter of a percentage point, to a range of 0.75 to 1 percent. The two previous hikes since 2006 were in December 2015 and December 2016. Two more rate hikes are expected before the end of 2017, and by 2019 the Fed expects to be looking at 3 percent interest rates again.

In the normal course of events, this will likely lead to consumer interest rates to also rise down the line. USA Today warns "Consumers with credit card debt, adjustable-rate mortgages and home equity lines of credit are the most likely to be affected by a rate hike."

As per Chicago Tribune, the Fed credits "a strengthening job market and rising prices [that] had moved it closer to its targets for employment and inflation."

As CNBC reports, the Fed thinks things are going pretty OK for the U.S. economy, though:

According to reports released just before the Fed decision, home builder confidence is at a 10-year high, and manufacturing in New York is surging due to a multi-year high in orders and a decade-high in unfilled orders.

However, the confidence has been slow to transfer to actual growth.

The Atlanta Fed on Wednesday cut its view for first-quarter GDP to a 0.9 gain – coincidentally, the same level of fourth-quarter growth when the FOMC approved the December 2015 rate hike.

Yellen said Wednesday that GDP is a "noisy" indicator from quarter to quarter and believes the economy over the long run is running at about a 2 percent pace.

Some reporting here from the December 2015 rate hike quoted some experts expecting the hike to disrupt the heated stock markets rise. That has, so far, not happened at all.

Scott Sumner, king of the "market monetarists," thinks that the Fed has moved itself into a position where actions like this likely won't have quick and obvious effects on visible financial markets:

A few years ago, markets reacted very strongly to rumors of a possible Fed rate increase. That's because NGDP [nominal gross domestic product] was at a suboptimal level, and the Fed policy stance had been too contractionary for a number of years. A rate increase would make the economy noticeably worse off than if the Fed refrained from increasing its fed funds target. (Recall that the Fed uses the fed funds rate as a signal of easing and tightening of policy.)

In recent months the level of NGDP is close to the level that results in macroeconomic equilibrium (employment close to the natural rate and inflation expectations close to 2%. Thus the market is relatively indifferent as to whether the Fed raises rates or not. As a result, Fed related news doesn't have much impact on asset prices. But this doesn't mean the Fed no longer matters, just that they are no longer the destabilizing force that they were during the 2008-15 period.

My 2009 Reason feature on the then-rising anti-Fed movement.