USDA to Farmers: Be a Patriot! Grow Cannabis!

Friday A/V Club: When one war interrupts another 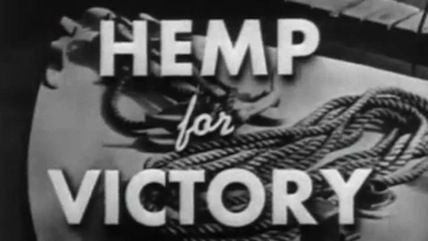 The crackdown on industrial hemp, like the crackdown on its psychoactive cousin marijuana, took off in the 1930s. But for a brief interval in the '40s, Washington reversed itself: With World War II disrupting access to the usual fiber sources, the U.S. Department of Agriculture urged American farmers to grow the crop for the war effort. The short film Hemp for Victory was a product of that push, with a narrator offering such quotable nuggets as "In 1942, patriotic farmers at the government's request planted 36,000 acres of seed hemp" and "For the sailor no less than the hangman, hemp was indispensable."

After the war the film was filed away and forgotten. When some legalization activists tried to dig up a celluloid copy nearly 50 years later, the USDA employees that they spoke with reportedly denied that it ever existed. But eventually they acquired it, and in the early '90s the movie became a cult item in certain drug-reform circles—a sort of an anti-Reefer Madness that a local NORML chapter might screen at an event. Removed from its original context, what once had been an ordinary ag film now felt like a secret history crossed with a camp classic.

In those days, a haze of disreputability hovered over anything even peripherally connected to marijuana. Today that smoke has thinned a lot when it comes to pot, and even more it comes to the kind of cannabis that won't get you high. A pilot program in Kentucky has more than 200 farmers growing industrial hemp legally in a famously conservative state; this week the Maryland General Assembly held hearings on whether to enact something similar in its domain. (For more on Kentucky's experiment and Maryland's interest, see my wife's paper on the subject, which I blogged on Wednesday.) In that environment, Hemp for Victory may not have as much of a giggle factor it had a quarter century ago. But it's still a remarkable artifact—not just of the time when it was made but, in a different way, of the time when it was rediscovered: