Legislation would remove marijuana from controlled-substances list and give states the ability to set their own policy. 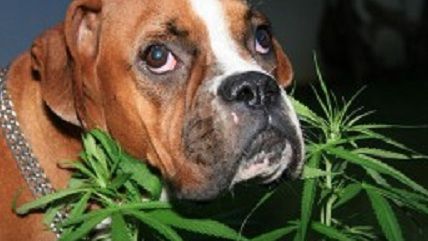 Rep. Thomas Garrett is a freshman Republican congressman who represents Virginia's 5th district. But being a newbie from a socially conservative area isn't stopping him from going big and bold right out of the chute: He has just introduced a bill called the "Ending Federal Marijuana Prohibition Act of 2017." From his office:

If passed, this bill would take marijuana off the federal controlled substances list—joining other industries such as alcohol and tobacco.

Originally introduced by Senator Bernie Sanders in 2015, this bill fulfills a responsibility to create a level playing field across the country….

"This step allows states to determine appropriate medicinal use and allows for industrial hemp growth, something that will provide a major economic boost to agricultural development in Southside Virginia. In the coming weeks, I anticipate introducing legislation aimed at growing the hemp industry in Virginia, something that is long overdue."

Rep. Tulsi Gabbard (D-Hawaii) is the Democratic co-sponsor in the House. Sanders' Senate legislation died when it was introduced a couple of years ago but now fully eight states and the District of Columbia have legalized recreational pot.

Back in 2011, Reps. Ron Paul (R-Texas) and Barney Frank (D-Mass.) introduced legislation to remove federal controls on marijuana, so the idea isn't new (though it's long overdue). But in the face of growing indications that the Trump administration, especially Attorney General Jeff Sessions, are bent on waging a new war on pot, Garrett's move is encouraging.

The federal government's classification of marijuana as a Schedule I drug under the Controlled Substances Act has always been stupid. A Schedule I drug is one that supposedly has no accepted medical use, a high potential for abuse, and cannot be used safely even under a doctor's supervision. Under federal law, pot is more restricted than cocaine, methamphetmanie, morphine, and PCP. That makes no sense.

Lest we forget, pot is the lynchpin of the war on drugs since it is the only "illicit" drug (to use government jargon) that people use widely and regularly. Marijuana-related arrests comprised more than 40 percent of drug arrests in a given year, with over 700,000 people arrested in 2014 on pot-related charges, with the vast majority being for simple possession. So even as most jurisdictions have decriminalized and de-emphasized marijuana enforcement, it remains a major way by which law enforcement interacts with citizens. You get rid of pot laws, you get rid of a lot of over-policing.

At various points during his campaign for president, Donald Trump signaled a hands-off approach to states that had legalized medical or recreational pot. That makes perfect sense coming from a Republican, as the party is constantly invoking states as "laboratories of democracy." Recent surveys show that even though only 35 percent of Republicans favor legalization, 55 percent oppose federal law enforcement interfering in states that have legalized weed. And yet as Reason's Jacob Sullum has noted, Jeff Sessions, a former senator from Alabama who regularly called for devolving power from Washington to statehouses, always makes an exception for pot.

In last night's address, President Trump confounded traditional party lines by, for example, calling for paid family leave and expanded funding for child care. While the Democrats typically have been just as bad as Republicans on the drug war, if Trump embraced federalism in this case, he would even further blur traditional lines between liberal and conservative. Here's hoping on this issue—as opposed to, say, boondoggle transportation "stimulus" projects or tax-funded family leave plans—he comes out as the first president to turn marijuana policy over to the states, where it has always belonged.