Colorado's Governor, Who Opposed Pot Legalization in 2012, Is Ready to Defend It

John Hickenlooper, who is "getting close" to concluding that legalization is better than prohibition, says he has a duty to resist federal interference. 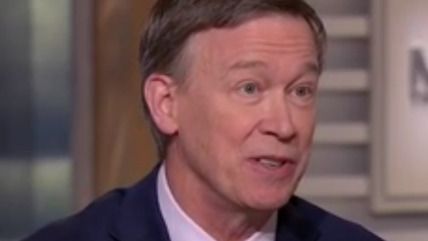 Two years ago today, during his appearance at the 2015 Conservative Political Action Conference, Donald Trump said states should be free to legalize marijuana, but he also said, "I think it's bad, and I feel strongly about it." He added, "They've got a lot of problems going on right now in Colorado, some big problems." Colorado Gov. John Hickenlooper, who opposed legalization in 2012, disagrees with Trump's impression of the consequences. The president, whose press secretary last week predicted "greater enforcement" of the federal ban on marijuana in the eight states that have legalized the drug for recreational use, may be interested in what Hickenlooper had to say in an interview with Chuck Todd on Meet the Press yesterday:

Hickenlooper: Well, I'm getting close. I mean, I don't think I'm quite there yet, but we have made a lot of progress. We didn't see a spike in teenage use. If anything, it's come down in the last year. And we're getting anecdotal reports of less drug dealers. I mean, if you get rid of that black market, you've got tax revenues to deal with, the addictions, and some of the unintended consequences of legalized marijuana, maybe this system is better than what was admittedly a pretty bad system to begin with.

Hickenlooper's views on legalization have been evolving since 2014 based on what has actually happened in Colorado, which suggests the "big problems" that Trump perceived in 2015 may have been exaggerated by the prohibitionists who were feeding him information. Even if legalization were a disaster in Colorado, of course, that would not mean the federal government should try to stop it. The federalist approach Trump has said he favors allows a process of trial and error from which other states can learn.

According to Hickenlooper, Attorney General Jeff Sessions, prior to his confirmation, told Sen. Cory Gardner (R-Colo.) that marijuana enforcement "wasn't worth rising to the top and becoming a priority." That assurance is consistent with Sessions' vague comments on the subject during a confirmation hearing last month but seems to be at odds with White House Press Secretary Sean Spicer's statement last week.

If Sessions does try to shut down state-licensed marijuana businesses in Colorado, it sounds like Hickenlooper is ready for a fight. "Our voters passed [legalization] 55-45," he told Todd. "It's in our constitution. I took a solemn oath to support our constitution….The states have a sovereignty just like the Indian tribes have a sovereignty, and just like the federal government does." Asked if he questions whether "it's clear that the federal government could stop you," Hickenlooper replied, "Exactly. I don't think it is."