'It's not up to these students to kick the ass of a neo-nazi! They don't have to raise their fist! They were taught to be peaceful! Fuck you!' 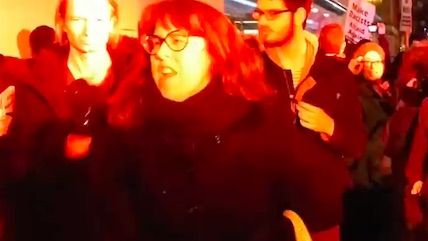 McInnes was there to give a talk to students, but was incessantly interrupted by hecklers. Afterward, masked black bloc protesters assaulted the controversial former Fox News personality and sprayed him with mace. Eleven people were eventually arrested.

"I saw Gavin McInnes and I wanted to punch him in the fucking face, but he got away," said one protester.

Meanwhile, a woman claiming to be a professor screamed at the police for not engaging in violence against McInnes and his followers (the so-called "Proud Boys"). Her tirade was captured on video. Watch below, starting at the 10:20 mark:

"You are fucking assholes!" the professor shouted at the New York Police Department (NYPD). "You're protecting the Nazis!"

The NYPD had arrived on the scene to prevent violence and escort McInnes out of the building safely. But the professor seemed to think the cops' job was to shut down a speaker she didn't like—by engaging in explicit violence against him.

"You should kick their ass!" the professor declared, referring to McInnes and his entourage. "You should!"

Note that the professor—a dead ringer for Melissa Click, by the way—considered violence to be beneath her and her owns students.

So according to the professor, it's college students' job to contemplate humanity and practice tolerance, and it's the cops' job to beat up people with whom the left disagrees. That's a remarkably hypocritical, and indeed, shortsighted view of the role of the police in a free society. If we give cops the right to violently censor unpopular views, leftists' speech will be in just as much jeopardy as McInnes's. The police already engage in far too much violence against people—people of color, in particular—and we should be pleased when they show restraint.

This far-left view that violence is a great way to battle Trump-ism has little basis in reality, according to social science research. When violent agitators sucker punch Richard Spencer, Spencer—a repulsive human being—gains sympathy points. When they shout down McInnes and attack him, McInnes gets free media and the public recoils in horror. When they set Berkeley on fire and stop Milo Yiannopoulos from speaking, Yiannopoulos sells more books.

As I argue in my latest column for The Daily Beast, Steve Bannon and President Trump are the biggest beneficiaries of mob violence:

Some may say that desperate times—the election of Trump—call for desperate measures, even though those measures have often failed in the past. I would ask them to take a mental picture of Nixon gleefully learning about the increased violence on college campuses, and then replace Nixon with Trump, who has just learned from Bannon that anti-Yiannopoulos protesters resorted to violence to shut him down.

Would Bannon and Trump be saddened to learn this news? Or would they see it as an opportunity?

"If U.C. Berkeley does not allow free speech and practices violence on innocent people with a different point of view—NO FEDERAL FUNDS?"

Quite the mystery, huh?

Since I wrote that, Trump has weighed in again:

Professional anarchists, thugs and paid protesters are proving the point of the millions of people who voted to MAKE AMERICA GREAT AGAIN!

McInnes, it should be noted, routinely says obnoxious things that deserve criticism. He's something of a Diet Milo. But the sort of anti-fascist violence—a contradiction if ever there was one—on display last night will be seen as legitimizing whatever law-and-order based repression the Trump administration plans to foist upon American citizens.

Updated at 3:00 p.m.: To be clear, the woman in the video does not specifically identify herself as an NYU professor. In a statement, an NYU spokesperson told me the university has not yet identified her.