The Idea of a Hate Crimes Offender Registry Is Absurd

Let's not come up with new reasons to continue punishing ex-cons after the fact. 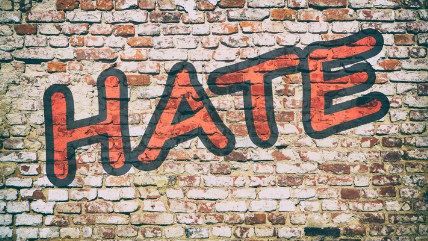 Somebody let California Assemblyman Raul Bocanegra (D-San Fernando Valley) know that the current criminal justice reform trend is supposed to be about helping released criminals who have served their time and done their penance re-establish stable lives in their community and get jobs. We're not supposed to be finding ways to make their lives even worse.

Bocanegra is engaging in a round of post-Donald-Trump-election legislation as social signaling that is bound to make life harder for a small class of criminals. On the basis of the reported increase in hate crimes in California (which the legislator attributes to Trump's election) Bocanegra is attempting to create a new crime registry. He wants to make a database for people to look up anybody who has been convicted of a hate crime. He declares:

The Hate Crime Registry will be an important public safety tool to better protect individuals and communities from hate crimes, help reverse this deeply troubling trend, and significantly reduce hate crimes in California. In the coming months, I will work diligently to bring together Democrats and Republicans, law enforcement and victims' rights groups, to take immediate steps send a clear message to perpetrators that violence rooted in bigotry and bias will not be tolerated in California.

He has introduced AB 39, which has no actual content as yet. It's just an announcement of an intent to pass further legislation to establish this registry.

The model for the assemblyman is obviously sex offender registries, but we're seeing more and more information every single year that sex offender registries are not effective and end up containing the names of people who may have committed crimes in the past but are no danger to the community and are not predators. Lenore Skenazy just went over a case last weekend of a mother of three on the registry forever due to her behavior as a teen.

These registries are awful, and there's no reason to think that a hate crime registry would be any better, particularly given that hate crimes are also a sentence enhancement. That means a person could be charged with a hate crime in connection to a murder … or in connection with vandalism. A database assumes that these people are all equally threats to the public due to the commission of a crime and assumes they'll maintain a bigoted attitude toward people based on their religion or race or sexuality or what have you, forever.

It's odd for a legislator to propose such a database given the criminal justice "ban the box" push, encouraging employers wait until they're offering somebody a job to check their criminal background. The City of Los Angeles just passed a law prohibiting using criminal history from weeding out early applicants (which is a terrible encroachment on private businesses' right to set employment practices, but that's another issue). The law will go into effect later in the month.

With a hate crime database, an employer wouldn't need to ask a job-seeker about their criminal background. They can just look up their name. And heaven forbid they have a name similar to somebody else in the database.

This is an awful, terrible law that the legislature should reject out of hand. Based on the data we've gotten from sex offender registries, this proposal will do little good but has a great potential to cause unneeded hardship.