Jeff Sessions Loves Asset Forfeiture. Will Congress Grill Him at His Confirmation Hearing?

Trump's nominee for Attorney General is at odds with many of his GOP colleagues on asset forfeiture and a host of other criminal justice issues. 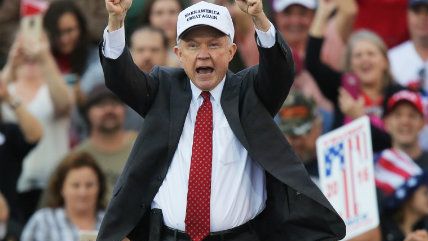 Attorney General nominee Jeff Sessions is expected to face a barrage of critical questions from Democrats Tuesday and Wednesday during his confirmation hearings before the Senate Judiciary Committee, but his Republican colleagues could just as well lob a few bombs at him over his big-government stance on asset forfeiture and criminal justice reform.

Sessions, an Alabama senator and former member of the Judiciary Committee, will now be sitting across from many of his colleagues. Democrats will likely focus much of their fire on Sessions' failed appointment to the federal judiciary in the '80s, which collapsed under accusations of racism from his days as a federal prosecutor.

However, Sessions is also at stark odds with several of his former Judiciary Committee Republican colleagues on civil asset forfeiture reform and efforts to roll back mandatory minimum sentencing laws, including Utah Sen. Mike Lee and Texas senators John Cornyn and Ted Cruz.

Sessions has been a staunch supporter of civil asset forfeiture, which allows police to seize property suspected of being connected to drug and other crimes, without convicting or sometimes even charging the property owner. Civil liberties groups say civil asset forfeiture lacks due process protections for property owners—who may have their cash, cars, and even houses seized—and creates perverse profit incentives for police.

At a 2015 Senate Judiciary Committee Hearing, Sessions said 95 percent of asset forfeiture cases involve people "who have done nothing in their lives but sell dope." In addition to being unhinged from reality, the comment reveals much about Sessions' antediluvian views on the drug war—he's a drug war dinosaur, as Reason's Jacob Sullum explained. For example, Sessions claimed in a 2016 Judiciary Committee hearing that "good people don't smoke marijuana."

Sessions was also one of a handful of GOP senators whose vocal opposition scuttled a bipartisan sentencing reform bill in 2016—widely considered the best chance in years to get a major criminal justice bill through Congress.

A Brennan Center for Justice analysis of Sessions' record, published last week, said that "as Attorney General, he could stall or reverse recent federal efforts, and disrupt nationwide momentum on the issue" of criminal justice reform.

"Sen. Sessions appears to subscribe to outdated ideas about criminal justice policy that conservatives, progressives, and law enforcement have come to agree do not help reduce crime and unnecessarily increase the prison population," the Brennan Center continued. "His views place him at odds with top Republicans and the current cross-partisan movement to reform the justice system."

The conservative commentariat has been less than enthusiastic about Sessions' nomination to lead the Justice Department. National Review's Michael Tanner wrote last week that "red flags in Sessions's record that should worry those who believe in limited government and individual liberty," noting his opposition to criminal justice reform bills, his fondness for civil asset forfeiture, his reflexive defense of police from federal civil rights oversight, his embrace of the drug war, and his regressive stance on marijuana legalization.

"His opposition to state legalization measures promises to put the Justice Department in conflict with conservative principles of federalism," Tanner continued.

The noted dopers at National Review were joined by arch-hippie George Will, who wrote in a December Washington Post column that Sessions should be questioned about his support for civil asset forfeiture. Will highlighted the case of Christos and Markela Sourovelis, whose house was seized by the city of Philadelphia after their son was caught selling $40-worth of drugs outside.

(Will links to my 2014 story on Philadelphia's infamous asset forfeiture court in his opening sentence. I travelled up to Philly to observe the court proceedings first-hand and interviewed several people who'd had their cars seized for misdemeanor crimes, or in some cases, no crimes at all.)

In addition to all this, Sessions has rarely, if ever, found an instance where he believed prosecutors had too much power. In an L.A. Times op-ed last week, Mark Oppenheimer wrote that Sessions has also been a consistent opponent of attempts to rein in prosecutorial misconduct. "Sessions identifies exclusively with prosecutors," he wrote. "I couldn't find a single example of Sessions stating in public that a prosecutor was too zealous, or that a defendant needed more vigorous representation. For Trump's intended attorney general, the arc of justice always bends toward the state."

Buckle up, buckaroos. This one's gonna be a doozy.