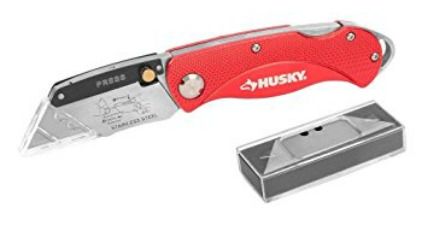 Last week New York Gov. Andrew Cuomo vetoed a bill aimed at stopping trumped-up arrests of innocent people for possessing tools that police arbitrarily identify as prohibited "gravity knives." Cuomo acknowledges in his veto message that the current application of the state's ban on gravity knives, which criminalizes possession of openly sold and commonly used tools, "is absurd and must be addressed." But he argues that the revised definition in S.B. 6483A (a.k.a. A.B. 9042A) is ambiguous and would impose too heavy a burden on cops and prosecutors. Cuomo's position is reasonable only if you think ordinary New Yorkers should bear the burden of demonstrating the legality of knives they bought at Home Depot to cut drywall, carpeting, or linoleum.

New York's ban, which was enacted in 1958, defines a gravity knife as "any knife which has a blade which is released from the handle or sheath thereof by the force of gravity or the application of centrifugal force which, when released, is locked in place by means of a button, spring, lever or other device." The law was meant to cover a substitute for switchblades, which New York legislators banned in 1954, that was modeled after knives carried by German paratroopers during World War II. The original gravity knife could be opened with one hand by pressing a button, trigger, or lever, relying on gravity instead of a spring, which was handy for injured paratroopers trying to free themselves from their parachutes. But New York City cops read the state's definition of gravity knife to cover any folding knife that can be opened by flicking the wrist, even if the operation is difficult or can be accomplished only by grasping the blade and flicking the handle open.

"This interpretation of the 'gravity knife' has resulted in a definition that is both amorphous [and] subject to abuse and could include nearly any pocket knife," Cuomo notes. "Under current New York law and practice, knives that are classified as 'gravity knives' are designed, marketed and sold as work tools for construction workers and day laborers at a variety of major retailers across the State. However, any person who goes into a store and purchases the product can be subsequently arrested and prosecuted for mere possession." A 2007 case involved the Husky Sure-Grip Folding Knife, a top seller at Home Depot, which had sold more than 67,000 in New York state the previous fiscal year. That's just one brand at one chain in one year. Applied consistently throughout the state, the NYPD's wrist-flick test probably would transform hundreds of thousands, if not millions, of nonviolent knife owners into criminals. Cuomo rightly describes that situation as "an absurd contradiction [between] existing commercial and enforcement practices."

A 2014 investigation by The Village Voice found that there had been some 60,000 cases involving gravity knife possession in New York City during the previous decade, making it one of the city's most prosecuted crimes. Stops for allegedly illegal knives overwhelmingly target blacks and Latinos. "The vast majority of those arrested had no criminal intent and believed that the common folding knives they carried were legal," notes the the preamble to S.B. 6483A, which was introduced by state Sen. Diane Savino, a Democrat who represents parts of Brooklyn and Staten Island. "These arrests and prosecutions do not contribute to public safety."

In 2015 Savino proposed changing the law to allow conviction for possessing a gravity knife, which is a misdemeanor punishable by a fine of up to $1,000 and up to a year in jail, "only if the defendant has intent to use the same unlawfully against another." That bill died in the Senate. The 2016 version would have amended the definition of gravity knife to clarify that it "does not include a knife that has a spring, detent, or other mechanism, including but not limited to resistance to opening, designed to create a bias toward closure and that requires exertion applied to the blade by hand, wrist, or arm to overcome the bias toward closure and open the knife."

Cuomo, whose veto was welcomed by New York City Mayor Bill de Blasio, worries that Savino's revised definition "would potentially legalize all folding knives." It is hard to see how, since a classic gravity knife does not have a bias toward closure that needs to be overcome by "exertion," and neither does a spring-loaded switchblade. Cuomo also complains that Savino's bill "would place the burden upon law enforcement to determine the design attributes of each given knife." That burden seems unavoidable if New York legislators are 1) determined to ban certain kinds of knives and 2) bound by the basic due process principle that people must be given fair notice of the actions that make them subject to arrest and prosecution. When the law bans tools based on their "design attributes," police have to be familiar with those, unless they simply arrest anyone with a pocket knife and let the courts sort it out, which is precisely the situation that Cuomo claims he wants to avoid.

Cuomo's preferred solution is "allow[ing] crafts and tradespeople to possess these knives without penalty" while "creat[ing] an affirmative defense for those who possessed gravity knives with no intent to use it unlawfully." The first exception would not necessarily prevent bogus arrests, since anyone carrying a folding knife that might fail the wrist-flick test would still have to show that he practiced an expiating occupation. The latter exception would not even prevent prosecution, since the "affirmative defense" could be presented only after a knife owner was arrested and hauled into court. In the name of making life easier for cops, Cuomo's approach would leave innocent people subject to arbitrary police harassment.

Addendum: If state legislators do not reform the gravity knife ban on their own, a successful constitutional challenge could force police to narrow their application of it. A federal lawsuit pending before U.S. District Court for the Southern District of New York argues that the wrist-flick test renders the gravity knife ban unconstitutionally vague.