Study Suggests Legalizing Pot Increases Adolescent Use, Except When It Doesn't

No significant changes detected in Colorado or among high school seniors in Washington; eighth- and 10th-graders in Washington are a different story. 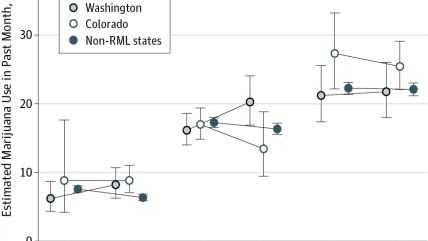 A new analysis of survey data finds that marijuana legalization was associated with more cannabis consumption among eighth- and 10th-graders in Washington but not among 12th-graders in that state or among Colorado students in any of those three grades. The study, published yesterday by JAMA Pediatrics, thus provides ammunition to both sides in the debate about how legalizing marijuana for adults affects adolescent use.

Voters in Colorado and Washington approved marijuana legalization in November 2012. Using data from the Monitoring the Future Study, U.C.-Davis epidemiologist Magdalena Cerdá and her colleagues looked at risk perceptions and past-month marijuana consumption in the three years preceding legalization (2010-12) and the three years following legalization (2013-15). They compared trends in Colorado and Washington to trends in the 45 contiguous states that did not legalize marijuana for recreational use during this period. They found no significant differences in Colorado or among high school seniors in Washington. But eighth- and 10th-graders in Washington deviated significantly from the national trends in risk perceptions and marijuana use.

Assuming that the deviations among eighth- and 10th-graders in Washington have something to do with legalization, Cerdá et al. say, the mechanism is unlikely to be diversion from legal buyers, since state-licensed marijuana stores did not open in that state until July 2014, halfway through the post-legalization study period. But they argue that legalization may have changed attitudes toward marijuana in a way that encouraged adolescent use. "Our findings suggest that legalization of recreational marijuana use in 2012 reduced stigma and perceptions of risk associated with marijuana use," the researchers write. "A shift in social norms regarding marijuana use may have, in turn, increased marijuana use among adolescents in Washington." They suggest that older students' attitudes were unaffected because they were already well-formed.

As for why there is no evidence of this phenomenon in Colorado, Cerdá et al. note that the medical marijuana industry had a firmer legal basis there than in Washington prior to 2013, which may have made it more visible and more likely to shape teenagers' views of the drug. "Colorado had a very developed medical marijuana dispensary system prior to legalization, with substantial advertising, to which youth were already exposed," they write. "Washington, on the other hand, did not provide legal protection to medical marijuana stores. Therefore, the degree of commercialization and advertising of these collectives was substantially lower than in Colorado."

That explanation seems pretty speculative, especially since Cerdá et al. note that medical marijuana laws are not associated with increases in adolescent marijuana use. In fact, they make a point of comparing Colorado and Washington to states that allow only medical use and find differences similar to those identified in the broader analysis, "indicating that the effects we found are specific to legislation permitting recreational use." It is plausible that legalizing marijuana for recreational use would have a bigger effect on adolescent attitudes and behavior than legalizing it for medical use does. But it seems suspiciously convenient that in Colorado, the state where recreational retailers have been operating the longest, the opposite is supposedly true.

It is also worth noting that Colorado, the state where Cerdá et al. found no significant change in adolescent marijuana use, is the example that prohibitionists preferred to cite until recently, based on data from the National Survey on Drug Use and Health (NSDUH). That survey measured an increase in marijuana use by teenagers after legalization in Colorado, but the change was not statistically significant. The latest NSDUH numbers indicate that marijuana use by Colorado teenagers declined after state-licensed marijuana retailers began serving recreational customers. According to NSDUH, adolescent marijuana use also fell in Washington during that period.