Merry Christmas from the NYPD 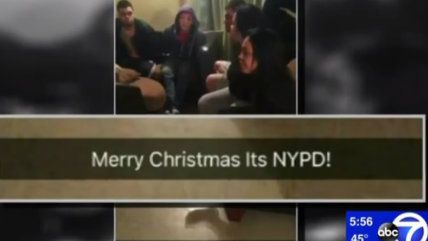 Officers from the New York Police Department raided a Brooklyn home on Thursday, arrested the family living there, and then posted pictures to Snapchat—yes, really—with the caption "Merry Christmas Its [sic] NYPD."

It wasn't until later that the cops realized they had raided the wrong house, and arrested and publicly humiliated the wrong people.

The family, according to ABC-7 in New York, was so upset by the whole incident that they filed a police report and called 911 to report the cops—which, yeah, good for them.

"The worst part was the Snapchats," Kimberly Santiago, one of the people wrongfully arrested in Thursday's incident, told the TV station. "He doesn't deserve to be a police officer. If he does that, what other things he does on the low that nobody knows?"

The ABC affiliate reports that NYPD internal affairs is investigating the wrongful arrests and, I think it's safe to say, completely inappropriate snapchatting.

After posting the first picture of the family in handcuffs, the NYPD warrant squad that showed up to the house at 6:30 a.m. posted a second picture of the inside of the house with the caption "Warrant sweeps its still a party."

The fact that the police raided the wrong house makes the story worse, but don't let Officer Snapchat—his name has not been released by the NYPD—off the hook that easily. Even if the cops had arrested someone suspected of an actual crime, it still would be wrong to publicly humiliate them on a social media platform (and still just as tasteless to offer holiday greetings while doing it). If the arrestees had been actual criminals, such cavalier behavior by the officers may have jeopardized the chances of getting a conviction. As it stands, it's like to cost the NYPD whatever amount of money they'll have to pay the family to settle the inevitable lawsuit, and it should also cost at least one officer his job.

It's worth nothing the similarity between posting Snapchats of arrested suspects and the use of fake traffic stops as holiday-themed publicity stunts. If you're not familiar with that second thing, it works like this: police officers will illegally stop drivers so they can (maybe with one officer dressed up like jolly ol' Saint Nick) hand out gift cards or other small goodies. The whole affair is recorded on camera and released for public relations purposes. They're supposed to be heartwarming stories about good cops, but they're actually terrifying abuses of police power, potential violations of the Fourth Amendment, and, quite frankly, just really creepy.

In both cases, the goal is to produce something that will "go viral" on the Internet. That's fine for a bunch of college students who are bored during their winter break, but it is beyond inappropriate for armed officers of the law who are given broad authority to use force against their fellow citizens. There is absolutely no overlap between these actions and legitimate police work, not even if the NYPD hired the people who made Venn diagrams for Hillary Clinton's campaign.

This sort of behavior from police officers reduces other people—people who are innocently sitting in their homes preparing for Christmas or people who are minding their own business while driving down the road—to being mere props in a public relations game. Those other people, by the way, are the people the police are supposed to be serving and protecting, not hoodwinking and humiliating.

Bottom line: on-duty police officers shouldn't be using Snapchat, but maybe they should download Waze—the map app that cops love to hate—so they can find the proper address and arrest the right suspects. When they do, there's no legitimate reason to talk about it on social media.