Some argue the election will send reform back to where it really belongs: the local level. 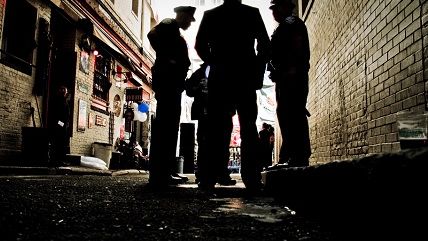 The presidential campaign focused some attention on the long-simmering debate over policing and the appropriate uses of force, but as is typical with national campaigns, the nuances got lost amid ideologically charged soundbites such as "law and order" and "Black Lives Matter."

Some advocates for police reform worry about what a new Trump administration will mean for these discussions given the president-elect's expectedly different approach toward the matter than President Obama's Department of Justice. But others argue the election will send reform back to where it really belongs: at the local level.

Two northern California cities, Sacramento and San Francisco, are good examples of the latter. They are currently plowing ahead with major oversight and accountability proposals for their police departments—the result of local policing scandals that have little to do with national political changes. Sacramento takes up the matter at a city council meeting on Tuesday.

The Sacramento reforms were prompted by a video of two police officers in pursuit of a mentally ill homeless man, Joseph Mann, who was armed with a knife and acting erratically. As the Sacramento Bee reported, the video sequence shows "the officers gunned their vehicle toward Mann, backed up, turned and then drove toward him again, based on dash-cam video released by police. They stopped the car, ran toward Mann on foot and shot him 14 times." One officer is recorded saying "f— this guy" shortly before they shot him.

The killing raised questions not only about the appropriate use of force in such situations, but about the city's willingness to provide the public information about what transpired. Top city officials—the police chief, city attorney and city manager—didn't release the video of the event until after the Bee acquired the footage from a private citizen. The shooting led to community protests and has been a source of strife—and council debate—ever since.

In September, the newspaper's editorial board published this pointed editorial: "The city could have been upfront with Mann's family about how many times he was shot and how long the investigation into the shooting would take. Instead, his brother, backed by enough activists to fill City Hall, had go before the City Council to beg for information. The city could have been clear about what training officers receive to handle people who are mentally ill. Instead, police still haven't responded to a Public Records Act request for a copy of the department's policy."

Reformers argue that the proposed policy doesn't go far enough, although backers argue that it is about as far as it can go given state law. Specifically, the measure would transfer power of the civilian oversight committee from the city manager's office to the mayor and City Council—thus providing a more independent level of oversight given that the city manager also oversees the police department. Council members are at least beholden to voters.

The city's proposal also does the following: "This resolution requires the city manager to ensure that all police officers of the Sacramento Police Department abide by council specified guidelines with regards to use of force. Key components of the resolution include the timely release of video after an officer involved incident occurs and the immediate notification of family members after an officer involved shooting." That attempts to deal with the public-records issue.

Civilian-oversight commissions are still limited by the state Supreme Court's Copley decision. In that 2006 case, the San Diego Union-Tribune tried to gain access to a disciplinary hearing regarding a deputy sheriff who was appealing his termination. As the newspaper reported, "The court ruled that police disciplinary hearings are closed — and the public has no right to learn about allegations of police misconduct, even when they are aired in a civil service commission." Legislative efforts to roll back parts of the decision have repeatedly been stymied by police union lobbying.

In San Francisco, officials have been reacting to controversy following three officer-involved shootings and a scandal involving racist text messages that were allegedly sent by police officers. As the San Francisco Chronicle reported in April, "The messages are loaded with slurs and ugly stereotypes, and include one from an officer responding to a photo of a blackened Thanksgiving turkey. 'Is that a Ferguson turkey?' the officer asks, referring to the city in Missouri that saw widespread protests after police fatally shot an unarmed African American man in 2014."

As the report's summary explained, "Although the COPS Office found a department that is committed to making changes and working with the community, it also found a department with outdated use of force policies that fail the officers and the community and inadequate data collection that prevents leadership from understanding officer activities and ensure organizational accountability. The department lacked accountability measures to ensure that the department is being open and transparent while holding officers accountable."

San Francisco officials have vowed to implement the 479 recommendations made in the Justice Department report. "We will continue to implement the recommendations for reform which will be built on the most current policing policies and practices, fostering an environment of trust and strong relationships with our communities," said acting Police Chief Toney Chaplin.

In Sacramento, Mayor-elect Darrell Steinberg, who is inaugurated on Dec. 13, told the Bee "the public certainly has a right to know whether a particular officer who has been accused of misconduct continues to serve in the role of police officer. … There ought to be a clear presumption of openness and the burden ought to be on the city attorney and police to demonstrate in a compelling way why anything is not public." There's concern that a federal lawsuit by Mann's relatives will allow the city to shut down public access to information about the shooting.

This much is clear: Whatever changes a new administration makes at the Department of Justice, local officials throughout California are on the front lines of the police-reform movement.