On His Way Out the Door, Obama Suggests Marijuana Should Be Legal

The president plans to do something about it "as a private citizen." 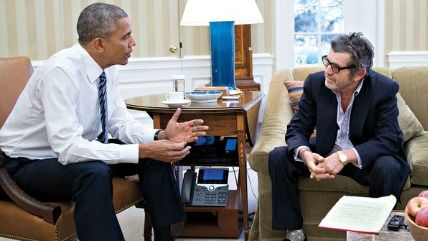 In a new interview with Rolling Stone, President Obama comes as close as he ever has to endorsing marijuana legalization, saying, "I am not somebody who believes that legalization is a panacea. But I do believe that treating this as a public-health issue, the same way we do with cigarettes or alcohol, is the much smarter way to deal with it."

Tobacco and alcohol, of course, are not prohibited by state or federal law, so the implication is that marijuana shouldn't be either. But Obama apparently is waiting until he leaves office to say so explicitly:

I will have the opportunity as a private citizen to describe where I think we need to go. But in light of these referenda passing, including in California, I've already said…that it is untenable over the long term for the Justice Department or the DEA to be enforcing a patchwork of laws, where something that's legal in one state could get you a 20-year prison sentence in another. So this is a debate that is now ripe, much in the same way that we ended up making progress on same-sex marriage. There's something to this whole states being laboratories of democracy and an evolutionary approach. You now have about a fifth of the country where this is legal.

It sounds like Obama plans to push marijuana reform "as a private citizen." It's too bad he did not do more to advance the debate as president.

To his credit, Obama has declined to interfere with legalization, saying "it's important" that states be free to try a different approach. He has conceded that marijuana is less hazardous than alcohol, to the consternation of old-timey drug warriors like the man Donald Trump has chosen to be his attorney general. Last year Obama even allowed that "if enough states end up decriminalizing, Congress may then reschedule marijuana"—a step he described as "progress." But he has resolutely refused to encourage such progress through administrative rescheduling or by urging Congress to accommodate state marijuana laws.

Legislation making the national ban on marijuana inapplicable in states that have legalized it, as Rep. Dana Rohrabacher (R-Calif.) has proposed, would remove the threat of prosecution and forfeiture that hangs over state-licensed cannabis suppliers, give them unimpeded access to banking, and allow them to take the same tax deductions as any other business. Such legislation has the potential to attract support on the right as well as the left because it embodies the federalism that Republicans claim to revere. While Obama's endorsement would not have guaranteed passage, it would have elevated the issue, encouraged conservative constitutionalists to take a position, and left the cause of marijuana federalism in better shape to prevail under a new president who claims to support it but has chosen an attorney general who is dismayed by the ongoing collapse of pot prohibition.

In Obama's view, he has done all that could reasonably have been expected. When Rolling Stone publisher Jann Wenner asks why he did not take a stronger position on marijuana legalization, Obama implies that it was not politically feasible:

One of the things that I think it's important for progressives to do when we're in a reflective mode after an election like this is, we can't have it both ways. We can't say, "Why aren't you reaching out to the folks who voted against us? And by the way, why aren't you maximizing getting 100 percent for the things that those of us, you know, who are already progressive and living on the coasts think should be done right away?" The point is that politics in a big, diverse country like this requires us to move the ball forward not in one long Hail Mary to the end zone, but to, you know, systemically make progress.

It is weird to portray marijuana reform as a cause that only "progressives" support when most Americans—60 percent, according to the latest Gallup poll—think marijuana should be legal and an even larger majority—including 70 percent of Republicans, according to a recent CBS News survey—think state decisions to legalize should be respected. Far from a polarizing issue, marijuana federalism has bipartisan support and the potential to unite voters and politicians who agree on little else. Obama could have taken advantage of that agreement to promote an alternative to a situation he describes as "untenable." But although he eventually stopped laughing at questions about marijuana reform, it was never a priority for him.