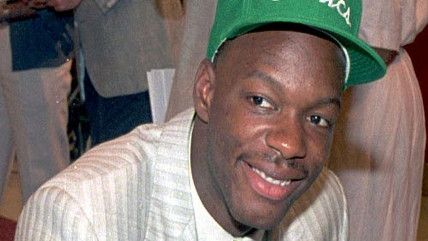 Though there was no fanfare from Congress, or from the conventional wisdom-thinking class who bemoan the fact that Congress doesn't pass as many laws as it used to in the good ole' days, the Anti-Drug Abuse Act of 1986 turned 30 years old yesterday.

The law was created as a knee-jerk response to the tragic cocaine overdose death of star University of Maryland basketball player Len Bias, who had just signed a contract with the defending NBA champion Boston Celtics. Author Dan Baum wrote in his drug war history book Smoke and Mirrors of how the "do something, anything!" mentality led then-Speaker of the House Tip O'Neill (D-Mass.) to demand swift and decisive action to ratchet up drug laws and to do it before the Republicans could beat his party to it.

Immediately upon returning from the July 4 recess, Tip O'Neill called an emergency meeting of the crime-related committee chairmen. Write me some goddamn legislation, he thundered. All anybody up in Boston was talking about was Len Bias. The papers were screaming for blood. We need to get out front on this now. This week. Today. The Republicans beat us to it in 1984 and I don't want that to happen again. I want dramatic new initiatives for dealing with crack and other drugs. If we can do this fast enough, he said to the Democratic leadership arrayed around him, we can take the issue away from the White House.

In life, Len Bias was a terrific basketball player. In death, he would become the Archduke Ferdinand of the Total War on Drugs. What came before had been only skirmishing; the real Drug War had yet to begin. Within weeks the country would be marching, bayonets fixed…

Crack was a congressional member's dream: an issue on which there was no real disagreement, only a question of who could prove himself more committed to the cause. Eric Sterling couldn't tell whether Congress was leading television or vice versa. In the month following Bias's death, the networks aired seventy-four evening news segments about crack and cocaine, often erroneously interchanging the two substances and blithely asserting it was crack that killed Bias…

At the time of the law's passing, it was heralded as a bipartisan example of Congress taking its lawmaking responsibility seriously and in the public interest. But three decades later, its effect on mass incarceration, as well as the racial disparity of those prosecuted for drug-related crimes, and the militarization of police who are now expected to fight a "war on drugs" rather than "serve and protect" communities, are indisputably terrible.

Mandatory minimum sentences were exponentially increased, crack cocaine possession was prosecuted 100 times more harshly than powdered cocaine possession, and the focus on dealing with drug addicts became one of punishment, rather than rehabilitation.

Put simply, it is a terrible law, still on the books, with little interest in Congress to repeal it entirely.

While some of the law's measures, such as the 100:1 crack to powder disparity, have been rolled back thanks to subsequent legislation, the fact remains that because politicians saw a high-profile tragedy as an opportunity to pass legislation (even worse, an opportunity to outdo the opposition party in how punitive such legislation would be) an unspeakable human and societal cost continues to be paid.

As Reason's Jacob Sullum noted, President Obama commuted the sentennces of 98 nonviolent drug offenders yesterday, including 42 who had been condemened to life in prison. Families Against Mandatory Minimums (FAMM) released a statement lauding the president's action, but FAMM's Vice President Kevin Ring also referred to the Anti-Drug Abuse Act of 1986, saying "You can't fix 30 years of bad policy overnight."

Ring added, "Think about it: Every day, people are sentenced in federal court based not on what their judge thinks is appropriate, but on what Tip O'Neill, Strom Thurmond, and a bunch of other deceased lawmakers believed 30 years ago. It's just ridiculous."

Watch FAMM's explainer video of The Anti-Drug Abuse Act of 1986 below: